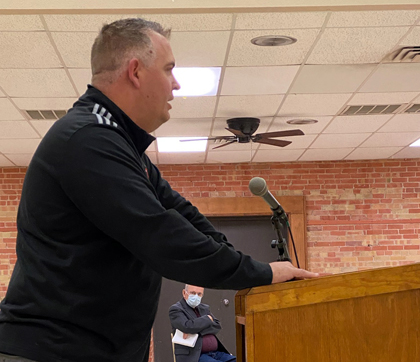 The City of Devine is working towards the ability to regulate signage within its City limits and extraterritorial jurisdiction after the City Council passed a Resolution allowing City staff to petition the Texas Department of Transportation for certified city status.
TxDOT regulates commercial signs along Texas highways under Chapter 391 of the state’s Transportation Code. Receiving certified city status will allow Devine to regulate commercial signage within the City limits and extraterritorial jurisdiction, including a sign advertising the new QuikTrip convenience store and gas station that is under construction on Hwy. 173.
QT’s David Wanders was at the Council meeting on Tuesday, December 15 to discuss the matter with Council, and said the company had never run into the issue before.
“Obviously we have made some very large financial decisions based on the ability to have that sign,” Wanders said.
City Attorney Tom Cate said an approved Resolution had to be presented to TxDot to see if Devine qualifies for certified city status.
“Because we have to submit a bunch of stuff to TxDot yet,” Cate said. “This is the initial step.”
Interim City Administrator Dora Rodriguez said City Secretaries of cities that are already certified cities had been a big help.
“They’ve given us all their cheat notes on everything, the steps that we need to do that’s going to help us instead of starting from scratch,” Rodriguez said.
A motion by District 2 Councilman Steve Lopez and District 3 Councilman David Espinosa to approve the Resolution passed unanimously with votes from District 1 Councilman Rufino “Flipper” Vega, District 4 Councilwoman Kathy Lawler, and District 5 Councilwoman Debra Randall.
Holiday decorations
Council discussed spending $10,000 to $15,000 for holiday decorations after Mayor Cory Thompson said he put the item on the agenda following complaints that Devine doesn’t decorate to the extent of Hondo, Castroville, or Lytle.
“The problem is is that we have already, through the stuff that’s already been approved in the past two and a half months, we’re already deficit spending,” Thompson said.
The City began the 2020-2021 fiscal year with a $20,742 surplus in the General Fund after finishing with a combined $1.2 million deficit over the previous two fiscal years.
“If we were to approve this, would the Parks and Recreation [Advisory Board] and the Chamber, would they work on this together?” Espinosa asked.

Thompson said that was his desire but wanted to point out where the City was with the budget.
Devine Chamber of Commerce member Sandy Herrera said the Chamber had worked on purchasing several thousand dollars worth of Christmas decorations in the past, but that it had never come to fruition.
“But yes, we would love to do it,” Herrera said.
“In my heart, the City of Devine and the Chamber, they need to work together,” Espinosa said. “Could possibly businesses and residents on Main Street, would they be involved?”
Herrera said that when Cindy Morales was Chamber President, the Chamber purchased lights and had everyone who would and could put them up do so.
The Chamber sponsored a “Let It Glow” light decorating contest in Dec. 2020.
Thompson said that the Garden Club should also be consulted.
“I threw out this number, I mean ten to fifteen thousand sounds like a lot until you actually start purchasing Christmas decorations,” Thompson said.
Council also discussed the possibility of purchasing decorations for other holidays, and Espinosa suggested asking the Chamber, the Parks and Rec Board, and the Garden Club to collaborate on ideas to bring to another meeting.
An Espinosa-Randall motion to table the item pending advice from the Parks and Rec Board, the Chamber, and the Garden Club passed 5-0.
Water line moved
After much discussion between Council, City Engineer Raul Garcia, and homeowners Eloy and Leo Alvarado, Council approved moving the planned route of the new PVC water lines away from the Alvarados’ property at 1401 Libold.
A survey completed by Garcia showed different property lines than the survey the Alvarados used when buying their property and building a privacy fence, which became a problem when the new water lines began to be installed. Council voted unanimously to move the location of where the water line will be placed in the area rather than seize 750 square feet of the Alvarados’ property or bore under their fence to lay the line.
Water line easements
In other water line news, Cate informed Council that the letters giving property owners final warnings about granting the City easements to install the new water lines have been sent out.
The City will start eminent domain proceedings against property owners who do not grant easements (see “Eminent domain a possibility for completion of water line replacement project” in the Dec. 2 edition).
Fifteen property owners had not responded to previous letters from the City as of November 24.
Note: A shorter version of this article was posted on Dec. 30.
By Marly Davis
Staff Writer