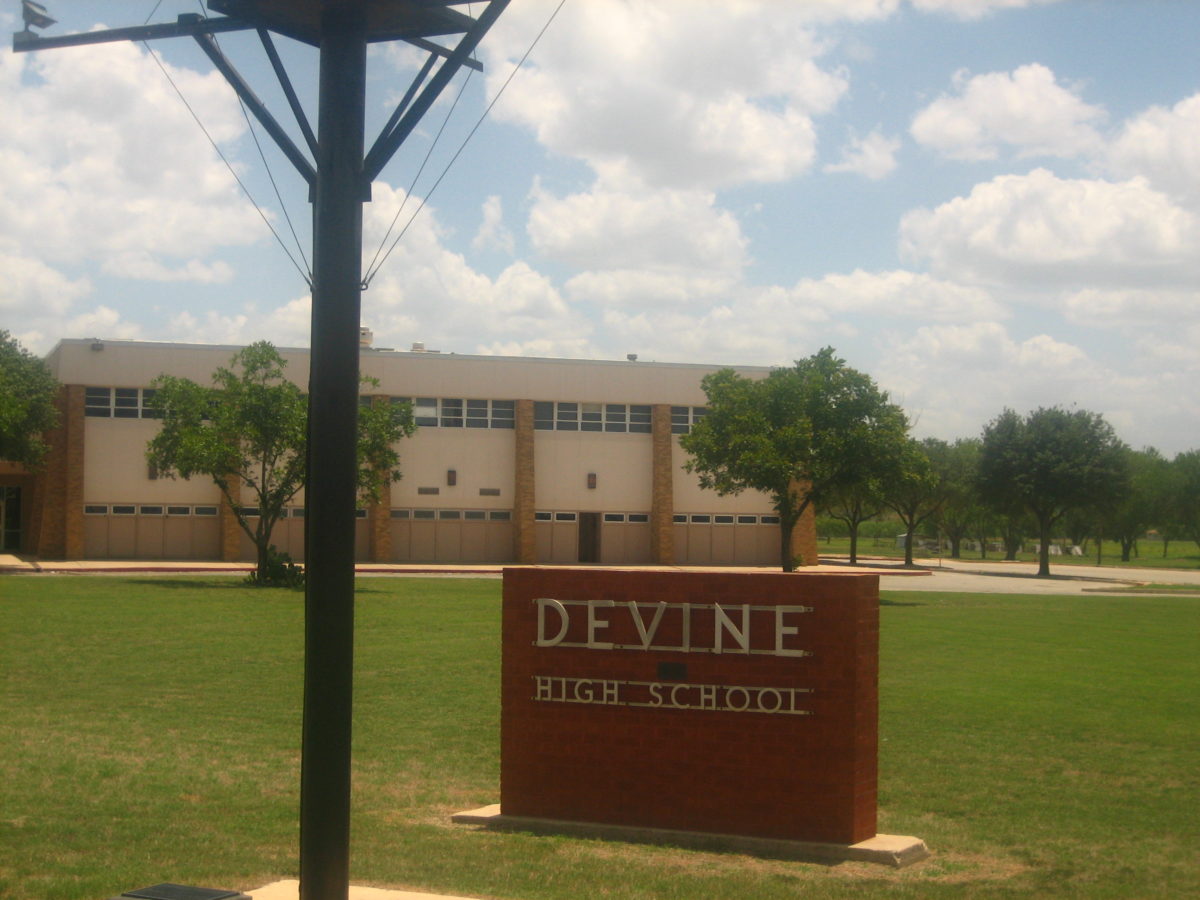 The Devine ISD Board called for a $13.9 Million Bond Election and a school board trustee election, both to be held jointly with the City of Devine on Saturday, May 4, 2019.
Wes Herring moved and seconded by Phillip Fitch to adopt an Order calling a Bond Election to be held by the Devine Independent School District in the amount of $13,980,000.00. Motion carried unanimously, 6-0 by board members Nancy Pepper, Henry Moreno, Carl Brown, Keri James, Phillip Fitch, and Wes Herring. Absent was Robert Morales.
3 Trustee seats up
Three trustee positions are up for election: District 2 currently held by Robert Morales and two At-Large positions currently held by Carl Brown and Wes Herring.
As of press time on Tuesday, Feb. 5 candidates that have filed for the 2 At-Large seats are Chris Davis and Renee Frieda. Carl Brown originally filed for an At Large position but switched to the District 2 trustee ballot last week.
Deadline to file for school board trustee election is February 15 at 5:00 p.m.
13.9 Million Dollar Bond election

Project Priorites:
8.4 Million – Ciavarra office and 10 new classrooms plus a gymnasium.
Secure Office Vestibule-The Ciavarra office entry with secure bulletproof vestibule may end up on the other side of the building from where it currently is, with the addition of a drop off and pick up parking lot. This would allow for one main entrance to that campus.
10 Classrooms to replace Portable Buildings- “We would like to move the Headstart kids out of the portables and into a classroom wing as well as two special needs classrooms”. “Again we feel this will help secure those kids and that side of the campus,” said Supt. Sostarich.
Gymnasium Elementary- “When I was Principal at the Intermediate years ago the PTO donated money, approximately $90,000 for a gym of sorts at the elementary. The money has been set aside in an account. A new gymnasium or box gym would keep the kids from having to go to the intermediate gym for PE. The size of the gym and type would depend on the committee. I doubt it would be big enough to be used as a competitive gym for events. Possibly it might be big enough for stands on one side to be used for small presentations,” he said.

$492,889 – Secure Bulletproof Office Vestibule at the Intermediate School. “It looks like we should be able to expand out the front side of the current office. It would be a main entrance spot for guests, a safe office with bullet proof entrance where guests would enter and check in,” said Supt. Sostarich.

$2.1 Million Dollars – Secure Bullet Proof Office Vestibule at High School – Relocation and renovation of the high school office with a secure vestibule. “We are looking at possibly moving the office from upstairs to downstairs by converting the old cafeteria downstairs/current girls weight room into a new High School Office with a secure bulletproof vestibule and entrance like Lytle Elementary has. Plus the addition of an automated system where students and teachers can enter with a card. Basically everyone would have an ID card they can swipe to enter. Gates would still open to outside without swiping anything for emergency reasons. But entrance would require a card.” “Again it all depends on what the committee decides.”

$1.5 Million Dollars – Tennis Courts at the High School. “If there is enough money left after all the top priority projects then we are looking to build a new Tennis Center with 8 courts. We then could host competitions like Hondo does. Currently it is hard to get in all the tennis players on the old tennis courts. According to Chad we have 60 kids signed up for tennis in the middle school for next year already. The courts could be used for PE classes also. And it would be close enough to the DSAC so those bathrooms and facilities could be utilized.”
“As we begin this process and meet with the architects to develop plans and drawings, we will be giving more information to our community when we have renderings of what the projects will look like. Keeping the community informed during the process is important to us,” he said. “We do need volunteers for our committee to help us with the process and details.”
As more details and estimated costs on the above projects are released they will be posted in The Devine News to keep voters informed.
“The goal of our upcoming bond is to provide safety and security capital improvements to our schools. With that in mind, the board began looking at the 2010 Master plan in the fall of 2018. We reviewed teacher and community input on campus facility inventories, and began with those areas that were not able to be included in the last bond,” said Sostarich, Devine ISD Superintendent. “Our plan is to build on those evaluations and form campus planning committees to develop an implementation plan.”

Ballot wording (Bond)
This is what the wording will look like on the ballot for the voters to approve or deny:
“Shall the Board of Trustees of the Devine Independent School District be authorized to issue and sell bonds of the District in the principal amount not to exceed $13,980,000 for the purposes of designing, constructing, renovating, improving, upgrading, updating, acquiring, and equipping school facilities (and any necessary or related removal of existing facilities), such bonds to mature serially or otherwise (not more than 40 years from their date) in accordance with law; any issue or series of such bonds to bear interest per annum at such rate or rates (fixed, floating, variable, or otherwise) as may be determined within the discretion of the Board of Trustees, provided that such rate or rates of interest shall not exceed the maximum rate per annum authorized by law at the time of the issuance of any issue or series of such bonds; and shall the Board of Trustees of the District be authorized to levy and pledge, and cause to be assessed and collected, annual ad valorem taxes on all taxable property in the District sufficient, without limit as to rate or amount, to pay the principal of and interest on the bonds and the cost of any credit agreements executed in connection with the bonds?”

Election Dates
Early Voting on two days, Monda, April 29, 2019 and Tuesday, April 30, 2019 from 7am to 7pm at Devine City Hall.
Election Day is Saturday, May 4 from 7am to 7pm at City Hall as well.
Who can Vote: ALL registered voters residing in Devine ISD boundaries can vote for the two At Large positions.
Only registered voters residing in District 2 can vote for the trustee in District 2.

The following are some questions and answers from Devine ISD Superintendent Scott Sostarich.
1.Though it’s apparently too early to put a price tag on this bond, do you have a range in mind? Bigger or smaller than the 2010 package? What is DISD’s current bond capacity?
$13,980,000, which is bigger than the 2010 package. The current bond capacity is 25 million.
2. What is the envisioned (or likely) impact on property tax rates?
The current I&S rate is 0.1650 and would increase to 0.2468 the first year. We are working on these numbers for our presentation and will have those break downs in our presentations when we present to the public. These tax rates are based on assumptions regarding assessed valuations and interest rates.
3. Are you seeking volunteers for the committees? If so, how can people get involved?
Principals will be working with their campus to form the campus facility committees
4. When do you envision holding public hearings? How many?
We will begin in March. We will hold at least three public hearings
5. Regarding tennis courts: DHS doesn’t currently have courts?
Not at DHS. Our current courts are located by the stadium
6. How many classrooms will be added?
10 classrooms are being proposed