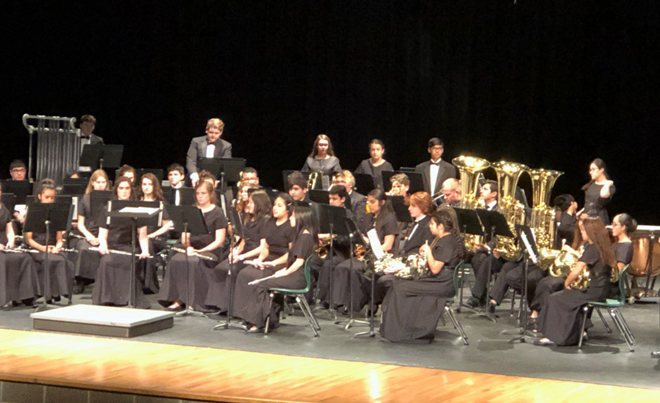 On March the 3rd, the varsity DHS Symphonic Winds performed at the UIL Region 11 Concert & Sight-Reading Evaluation at Pleasanton High School and earned the prestigious overall HS Sweepstakes Award!! The band received straight Ones (Superior Ratings) from ALL SIX judges! The overall Sweepstakes Award is only earned if the organization earns a First Division (Superior Rating) in all (3) components – Marching, Concert, & Sight-Reading! What makes this “Sweepstakes Award” even more exciting this year is that it is the second year in a row – back to back awards!! It has been many years since the DHS Band has earned this award twice or more in a row. Records are sketchy, and by looking at the trophies the last time it definitely happened was 1996 & 1997 – however that is not conclusive. It is conclusive however that it has been over 15 years or more!

The Warhorse Marching Band has earned a First Division rating (and three straight ones!) at the UIL Region Marching Contest for the past five years in a row. This year’s production, “Bollywood Adventure” was a great success and earned many awards including straight ones at UIL. So the entire Warhorse Band earned the first component of this Sweepstakes Award in October. Then it was all up to the varsity DHS Symphonic Winds to finish the job. They performed wonderfully on the stage at the Pleasanton HS Performing Arts Center on March 3rd! The selections included: “Rough Riders” by King; “Blue & Green Music” by Hazo (a very challenging and great piece of music); and “Scenes from the American West” by Wilds. The performance earned the ensemble three straight ones from the judges!! Even though exhausted at that point, the students are then escorted to a different rehearsal room for the sight-reading portion of the contest to finish the 3rd and final component of the potential Sweepstakes. The Symphonic Winds did an outstanding job of sight-reading and again earned three straight ones from the judges!! In total, the DHS Band earned a total of NINE straight Ones from UIL for the 2019-2020 season!!! The excitement from our students and parents has made all the work completely worthwhile and added to the continued desire to pursue the quest toward excellence and building tradition! Comments from the judges at the recent UIL contest included: “Very well performed – BRAVO band & directors!”, “Super band! Congrats to all!”, “Very musical group!”, and “Very fine performance!!”. From this Director’s standpoint, all I can say is “Wow!” “Job well done!! It is truly a privilege to work with such great young adults!!
Jeff W. Miller, Director of Band
Members of the Devine Symphonic Winds are:
Lokey Aguero, Roberto Alvarado, Amy Bailey, Charlize Benavidez, Pauline Calame, Isaias Cardenas, Kaylee Carrillo, Michael Cubriel, Madison Cumpian, Felicity Diaz, Cassandra Elias, Isabella Elias, Jordan Erxleben, Corwin Flores, Aaron Freas, Garrett Fritz, Ben Garcia, Ebany Garcia, Jacob Guajardo, Joselyn Guajardo, Lily Hargis, Jacob Hicks, Josie Holguin, Gilbert Iglesias, Andrew Kohlleppel, Juan Lopez, Clarissa Maldonado, Caleb Martin, Ava McCaleb, Daisey Mendoza, Liliana Mendoza¸Madilynne Mohr, Skyler Montoya, Jonathan Morin, Kylie Nelson, Harper Parson, Jessenia Philippi, Evan Priest, Isaiah Rejino, Andrea Sanchez, Brian Schaefer, Laurel Spannagel, Lillian Steele, Hannah Stolzman, Josephine Taitano, Josette Villanueva, Sidney Weyel, and Paige Williamson.