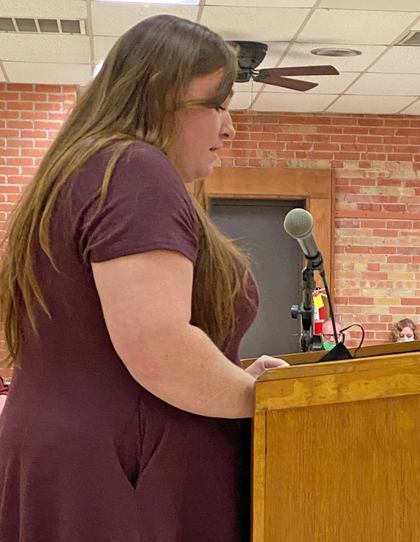 The Devine City Council voted unanimously to revoke the $6,650 it approved for the Devine Chamber of Commerce following allegations of impropriety leveled at President Marcus Buckner by Secretary Bonnie Manning during the Council meeting last Tuesday, December 15.

A Chamber meeting to discuss the issue and elect officers is scheduled for Tuesday, January 12 at 6:00 pm at the George S. Woods Community Center.

Council initially approved the funds for the Chamber during the November 24 meeting,  Mayor Cory Thompson presented the request on Buckner’s behalf, and in a letter addressed to Council, Buckner asked for $3,900 to design and install a billboard along IH-35 for six months; $1,000 to design and print 100 “Think Local” shirts to sell and give away; and $1,750 to design and manage a revamped Chamber website.

Buckner’s letter, which was printed on the Chamber’s letterhead, specifically called for his business, Marken Media Co., to “design and facilitate getting” the billboard, as well as “create a more dynamic website” for the Chamber. No other businesses were named, and no mention was made of taking bids on the jobs.

Manning addressed Council about the projects on Dec. 15 and said that she was made aware of Buckner’s letter on Dec. 8, two weeks after it was presented to Council, and believed that the Chamber board was to discuss and vote on items in a meeting the following week.

However, she said she found out that Council had already approved the funds for the project on Dec. 11.

“I also became aware shortly thereafter that a check was made out in the amount of $6,650 from the Chamber of Commerce to Marken Media,” Manning said. “This was the exact amount the City had just given the Chamber.”

Manning said she stopped the bank from disbursing funds from the Chamber to Marken Media Co., and said that all expenses must be approved by the Chamber board and recorded in minutes.

“This process is crucial to ensure we do our due diligence and execute our fiduciary duties with the utmost integrity,” Manning said. “It is also important to understand that we may never commingle personal funds with the Chamber funds, and that we are to take bids on any services the Chamber may need to pay for.

“To put it simply, when this letter was presented to the City Council, it had not gone through the proper procedures to make it legitimate. When the letter stated that Marken Media would be the service provider for these items, it had never been up for bid as it should have been. When Marcus Buckner wrote a check to his own business with funds received from taxpayers, it was done without the authority, knowledge, or consent of a properly formed board. These were the actions of an individual, not the board.”

Manning recommended that Council revoke the $6,650 approved for the Chamber if contingent upon being used as specified in Buckner’s letter, and advised that they look for Chamber board minutes signed by the secretary before agreeing to future funding requests.

Thompson, who served on the Chamber board until his appointment to mayor in July 2019, said he assumed the Chamber had had a meeting about Buckner’s requests because his letter was written on Chamber letterhead.

A Dec. 16 post on the Chamber Facebook page attributed to Buckner that has since been deleted claimed that the projects proposed in Buckner’s letter to Council were to be managed by Marken Media Co., “with other local vendors being hired or contracted for various parts of the project.”

“The City dispersed [sic] a check to the Chamber which was paid to Marken Media Co. to begin the project management as outlined in the council approved letter,” the post said. “Marken sent a payment to the billboard company ($3400) to purchase one billboard and purchase hosting on Squarespace for a website.”

The post said that Buckner had asked JVAIL Photography and Image Matters for quotes.

“After a Chamber of Commerce board member dissented about the use of the funds, Marken Media Co. canceled payment to the billboard company and requested a refund from SquareSpace and issued a full refund to the Chamber until the Chamber Board could meet to discuss the issue,” the post said.

Further, the post said that the Chamber refunded the $6,650 to the City following Council’s Dec. 15 vote.

Manning’s remarks to Council are reprinted in full as follows:

“My name is Bonnie Manning. I am the Board Secretary on the Devine Chamber of Commerce, and I am here on behalf of myself and numerous business owners.

To begin, I want to make clear that I am not here to damage the reputation of anybody and will only speak truthfully to the events with which I have direct experience and knowledge in, and relate to the $6,650 of advertising funding the City Council approved for the Chamber. Since the story broke last week, I have had numerous business owners vent their frustration to me about recent events surrounding the Chamber. My thoughts are that if one individual can smear the reputation of the Chamber, as well as the faith and trust placed by the community, surely another individual can restore it by telling the truth.

On November 24, there was a City Council meeting in which a letter was presented on behalf of the Chamber President Marcus Buckner by Mayor Cory Thompson, asking for advertising funds from the hotel motel tax. The Council generously approved the motion. In the past, the Council has approved similar amount of funds to help with our Fall Festival. We weren’t able to have the Fall Festival due to the pandemic, so my understanding is these funds would help in other ways to promote Devine businesses, including a billboard, t-shirts, and a new website. It is noteworthy to add that in the letter from Chamber President Marcus Buckner, his own business, Marken Media, was to EXCLUSIVELY, “design, facilitate, manage,” and ultimately profit from these funds. The letter did not mention any other businesses or individuals that may help, nor made a suggestion to take bids.

HOWEVER, a week ago on Tuesday, December 8, I, as Board Secretary, finally became aware of the contents of this letter through a text that Marcus Buckner sent myself and other board members. This was a full TWO WEEKS after this letter was already presented to council. My understanding was that we, the Chamber board, would discuss and vote on these items at a meeting the following week. I did not know that the funds had already been given to the Chamber from the City.

On Friday, December 11, just a few days ago, I found out that the city council had indeed approved the funds based on that letter by reading it like most other people in the Devine News. I also became aware shortly thereafter that A CHECK WAS MADE OUT IN THE AMOUNT OF $6,650 FROM THE CHAMBER OF COMMERCE TO MARKEN MEDIA! This was the exact amount the city had just given the Chamber. As soon as I became aware of this, I raced over to the bank, found out the check was still processing, I paid the $29, and stopped the check from distributing to Marken Media.

Some who may not see the significance of this needs to understand the way the Chamber of Commerce is supposed to run. The Chamber of Commerce is a non-profit organization that is governed and overseen by a board including a President, Vice President, Secretary, Treasurer, and Member at Large. Meetings are called by the President and recorded by the Secretary in the form of minutes. All expenses must be approved by the board in a formal meeting and recorded in the minutes by the Secretary. This process is crucial to ensure we do our due diligence and execute our fiduciary duties with the utmost integrity. It is also important to understand that we may never comingle personal funds with Chamber funds, and that we are to take bids on any services the Chamber may need to pay for.

To put simply, when this letter was presented to the City Council, it had not gone through the proper procedures to make it legitimate. When the letter stated that Marken Media would be the service provider for these items, it had never been up for bid as it should have been. When Marcus Buckner wrote a check to his own business with funds received from taxpayers, it was done without the authority, knowledge, or consent of a properly formed board. These were the actions of an individual, not the board.

I want to make clear to anybody who has ever been a member of, donated money to, or participated in events held by the Chamber of Commerce, as well as the City Council and the entire community of Devine, that as long as I am a board member on the Devine Chamber of Commerce, I will not allow actions such as these to go unchecked. I cannot say how this may be handled internally, as we have not had a meeting to address it, nor may I speak for other members.

But I can say that it has been an absolute embarrassment to be associated with the contents of this letter and other allegations that have been brought forward for the last seven days. I have always and will always conduct myself with the utmost honesty, integrity, and care for the duties with which I am entrusted.

I now speak directly to the City Council: if the funds that were given are contingent upon them being used in the ways discussed in the letter, I may recommend the Council votes to recall those funds until a time the Chamber Board can discuss, take bids for, and vote on ways the funds will be used. The Chamber may then present another request to the Council for consideration. I would also request that if the Council receives any future letters requesting funds from the Chamber, please look for the accompanying minutes showing that it was indeed voted on and approved by the board, and then signed by the Board Secretary.