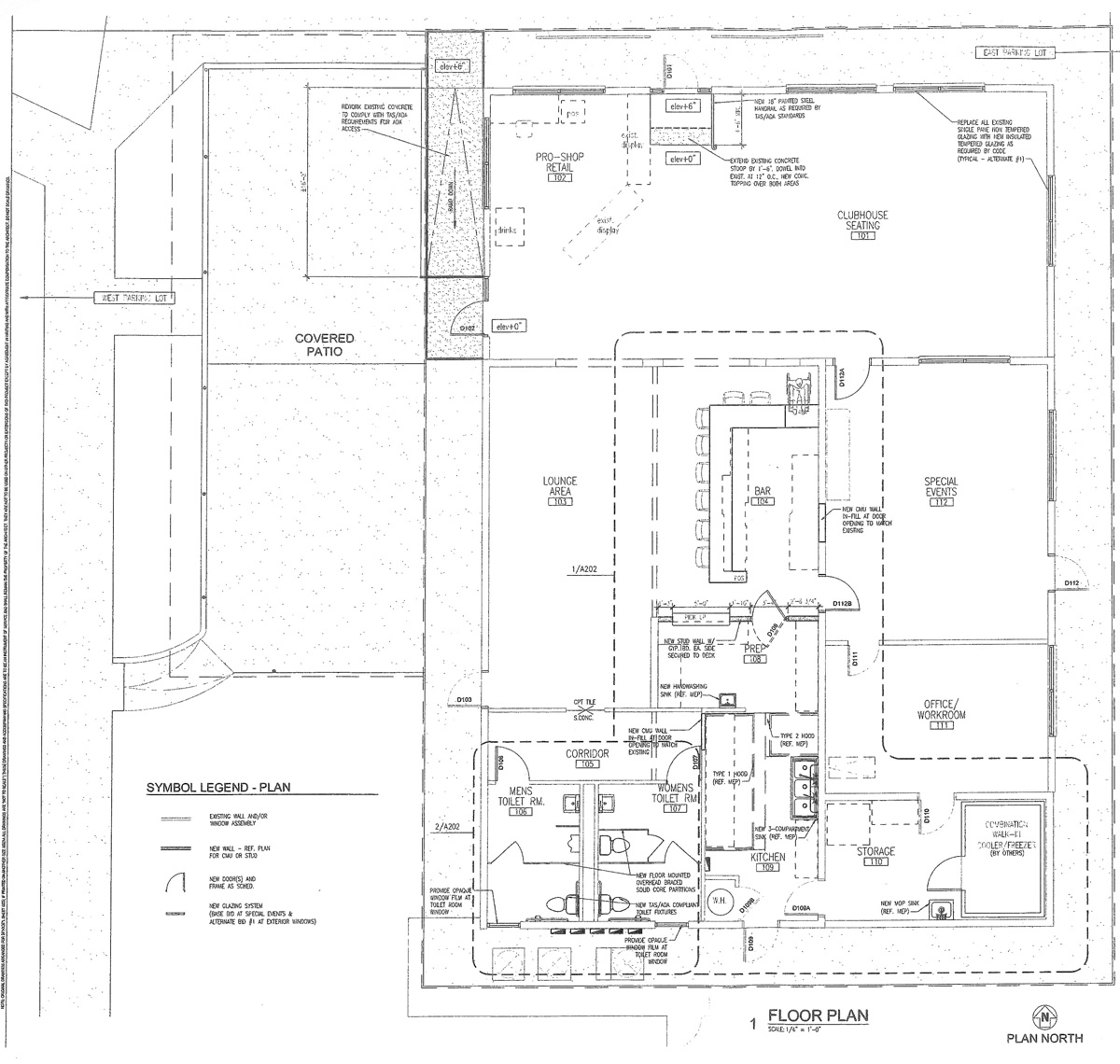 The final design layout for the Devine Golf Course renovation was approved by City Council during a Special meeting held on Tuesday, October 27.
GRG Architecture’s Edward Garza estimated that construction documents will be ready in about three weeks, after which the project can put out for bid.
The design features a lounge area including a 22-foot bar with seating for eight, as well as an additional ADA-compliant space. There will also be a small pro shop, clubhouse seating, and space for special events.
District 3 Councilman David Espinosa asked Garza about the possibility of including restroom access via an exterior door so people wouldn’t have to go through the clubhouse bar area, and Garza said that was a feature that could be added.
“That would be great,” Espinosa said. “It wouldn’t interrupt the inside stuff going on with folks from outside.”
District 5 Councilwoman Debra Randall questioned the location of the bar’s ADA-compliant seating.
“Why do we have to have it right here?” Randall asked. “Can we put it on this corner?”
Garza said that GRG had looked at putting the ADA space on the other end of the bar near the prep area but that the space was inadequate.
“The reason that we moved it is because when we tried to put it anywhere on the other side, it gets so pinched between that bar and the existing wall we don’t have the right access to it,” Garza said, adding that stretching the length of the bar provided the benefit of more room and additional equipment. “And we thought moving into that other side, you still get a good look, and that side opens up to the larger lounge area, and so you have all kinds of room there.”
Espinosa also asked if the design layout had been discussed with Scott Grego of SG Golf Management, the company that oversees the day-to-day operation of the golf course.
“We talked about the revisions,” Mayor Cory Thompson said. “I’m not going to say he’s one hundred percent happy with them either, but he understands that we have to work, like what the architect’s talking about, around ADA compliance, and we can’t get around that, is the problem. If the ADA compliance person says ‘you have to be within this area,’ well, okay, that’s the way it is.”
Thompson asked Shirl Grego if she thought the layout design was sufficient, and she said that it was.
“Better than I imagined,” Grego said.
Thompson said that some of the things included in the layout design, like the walk-in freezer, was more about making sure the proper plugs were installed for the future.
“Well, there’s definitely going to have to be an upgrade on electrical, right?” Espinosa asked. “It’s not going to handle all this with the existing amperage.”

Garza said that an engineer had been to the site for an initial assessment, but declined to speak on the engineer’s behalf.
“I do know, like you’re saying, that there’ll definitely need to be an upgrade in service,” Garza said.
Garza thanked Council for the opportunity to renovate the clubhouse, and said that GRG would do its best to meet the project’s $342,000 budget.
“But that being said, just a reminder, ours is a cost projection,” Garza said. “We can’t guarantee that whatever bids come in are going to be within the budget.”
He added that the cost could also be affected by how the renovation is phased.
“Is [the clubhouse] all going to be available to the contractor all at once, and there’s a complete shutdown of the existing operation, or it’s relocated somewhere else?” Garza asked. “Or is it going to have to be operational while it’s being renovated?
“And those kind of challenges need to be scrutinized a little more, and that’s probably going to come when we get down to the bidding process.”
Thompson said the City needed to look at the cost of portable office spaces and compare the numbers to doing the renovation in phases, which would add time to the project.
“Our assessment of it, with the input that we had, if we try to keep [the clubhouse] operational and do the project while its being occupied and operating as much as possible, that could drag out construction another two, three months,” Garza said.
The contract with SG Golf Management stipulates that the City pay the management company $32,530 a month until a turnkey clubhouse renovation is complete.
Garza said the clubhouse was built in 1967, and that they wouldn’t know what they had until the contractors start opening things up.
“I will say I do think we have a very good plan of attack,” Garza said. “I think we’ve addressed the process the best we can, as best as can be hoped for.”
Thompson asked if alternates, or optional improvements, would come into play prior to getting bids for the project.
“We’re going to identify the alternates, so yeah, you’ll know before,” Garza said. “And then when the bids come in, what typically happens is we ask the contractor to give a price for the entire project and then break out, ‘For this alternate, how is that?'”
“So any additionals that we want, it’s going to be the cost to the City?” District 2 Councilman Steve Lopez asked.
“It’s going to be information for you all to make the decision,” Garza said. “We’re going to get bids, we’re going to hope, and we anticipate sort of the base of what we’re showing is going to come in under budget or at budget.
“And if it doesn’t, well, then we start making informed decisions of how much are we going to save if we take this out or add that.”
A motion by Randall and District 4 Councilman Chuck Guzman to accept the final design layout passed 5-0 with support from Espinosa, Lopez, and District 1 Councilman Rufino “Flipper” Vega.
By Marly Davis
Staff Writer