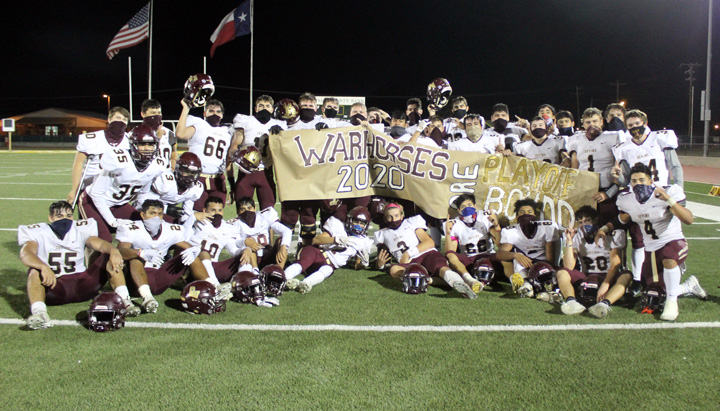 Your Devine Warhorses take on the Raymondville Bearkats Thursday night at Buc Stadium in Corpus Christi. The winner of this Bi-District matchup moves on to face either the Navarro Panthers or Cuero Gobblers in Area.
Devine (8-2, 3-2) finished second place in District 15-4A while Raymondville was awarded third place from District 16-4A after an abbreviated district schedule.
Bearkats stats
Granted, Raymondville only played a single game but their stats tell a prolific, offensive story. Zaraivion Armendarez leads the Bearkats in rushing, receiving, and all-purpose yards. I am sure Jimbo and Schmitty will have a fun time saying that name often during Thursday’s live broadcast.
In the Bearkats 39-33 victory over Victory West, Armendarez rushed 24 times for 265 yards and four touchdowns and caught five passes for 92 yards and two touchdowns. For good measure, he also completed a pass for 15 yards, although he did throw two picks.
Almendarez was definitely busy during the Victoria West game, and look for that “trend” to continue Thursday against the Warhorses.
Justin Smith contributed 71 yards on 10 carries while Jayson Cantu rushed 9 times for 51 yards. Armendarez, Smith, and Cantu are all seniors so even though they have not been in the fire much this season, they are veteran players.

Gomez’s view
“Raymondville is big and athletic!” That is how Devine Head Coach Paul Gomez began his Raymondville analysis. “If COVID was not around they would have battled Sinton for the district championship in that district. Instead, in order to decrease travel since all valley schools in that district cancelled the season except for Port Isabel and Raymondville, that district came to an agreement that the five Corpus schools(Sinton, Rockport-Fulton, Ingleside, West Oso, and Robstown) would battle it out and get the 1st, 2nd, and 4th seed in district and the winner between Port Isabel and Raymondville would get the 3rd seed. So, we are facing a quality team.”
Raymondville has speed and athleticism that makes this bi-district matchup interesting as the Warhorses also possess that kind of talent.
“They have an outstanding athlete (5’10” 175lbs.) in Zaraivion Armendarez that accounts for 85% of their offense and scored all their points in their last and only game versus Victoria West,” said Gomez. “He is extremely fast and strong. He plays running back, receiver, wildcat QB and cornerback. He returns kickoffs and punts. He had a great year last year and even against their loss to Wimberley last year he had an awesome game against them.”
The Bearkats will rely on Armendarez for most of their big plays offensively. Raymondville has other options as well.
“Their QB Jayson Cantu is a big guy he is 6’4″ 210lbs. and athletic. He also runs the ball well. Their receivers are all good athletes. Their offensive line is big. They run the spread offense and have good skill kids,”
What will the Warhorses see when they have the ball?
“Defensively,” Gomez began, “Raymondville lines up in the split and also in a 3-3 stack and also give a 5-1 look where their stack backers come off the edge. They have some huge defensive tackles over 300 lbs. and very athletic defensive ends, especially #11 Dylan Ramirez (5’11” 195lbs.) who is their best pass rusher as well. They have good linebackers and good cover personnel in the back end.”
Playoffs generate a new kind of excitement with the win-or-go home outcome.
“We are excited for the playoffs and our guys are not ready for the season to end. We will have to have some high-energy practices this week and I know our boys will bring it all week! Hope to see y’all Thursday Night! We can have 1,000 fans on our side since it is a big stadium so we would definitely appreciate your support! Warhorse Nation let’s be loud!” Gomez finished saying.
By Jerel Beaty
Staff Writer