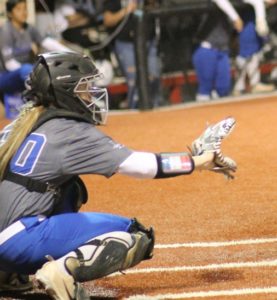 Natalia (18-3-1) got back into their groove last Friday afternoon at home versus the visiting Comfort Deer. The Lady Mustangs limited the Hill Country squad’s chances from the start, as Freshman Abi Woodson allowed one hit in a 5-inning shut-out run-rule victory. Natalia’s offense also did their job, as they belted out 14 hits in the home win.
As mentioned, Woodson picked up the win as she allowed one hit, walked one and struck out 13 in the game. Comfort only had two girls reach second base in the game and only three total get on base during the contest.
Two of their three came in the opening at bat. After watching Woodson strike out two in a row, the Deer used an error and a walk to get early momentum. This momentum was short-lived, as Woodson sat down their 5th batter with her 3rd K of the game.
The Lady Mustang offense struck in their first at bat. They used a Taty Alvarado single and a Biviana Figueroa home-run to take the 2-0 lead.
This was only the beginning as Natalia went on to score six runs in the 2nd and two final runs in the 5th to fuel Natalia to a 10-0 run-rule victory.
At bat: Trista Vera 3-4-1run scored, Alvarado 3-4-3runs scored, Gabby Munoz 0-1, Gabby Contreras 1-1-1RBI-1run scored, Mena Figueroa 0-2-1RBI-1run scored, KK Lara 0-1-1run scored, Bryanna Perez 0-2-1RBI, Zita Perez 1-2-1run scored, Woodson 2-3-2RBIOs, Dez Perez 1-2-1RBI, Gabi Santoya 1-2-1RBI and B. Figueroa 2-4-1HR-3RBIs-2runs scored.
Defensive Put-Outs: B. Figueroa 13, Alvarado 1.
Upcoming Games
Natalia was on the road in their final tune-up for district, as they battled the Boerne Lady Greyhounds on the road on Wednesday, March 13th at 12:00 noon. This was a varsity only contest and the first meeting between the two programs in 10+ years. The only other meeting between the two was 10+ years ago at the Lytle Tourney where Natalia run-ruled the Lady Hounds.
On Tuesday, March 19th Natalia opens District 30-3A at home versus the Cotulla Cowgirls at 7:00 p.m.
By Eric Smith