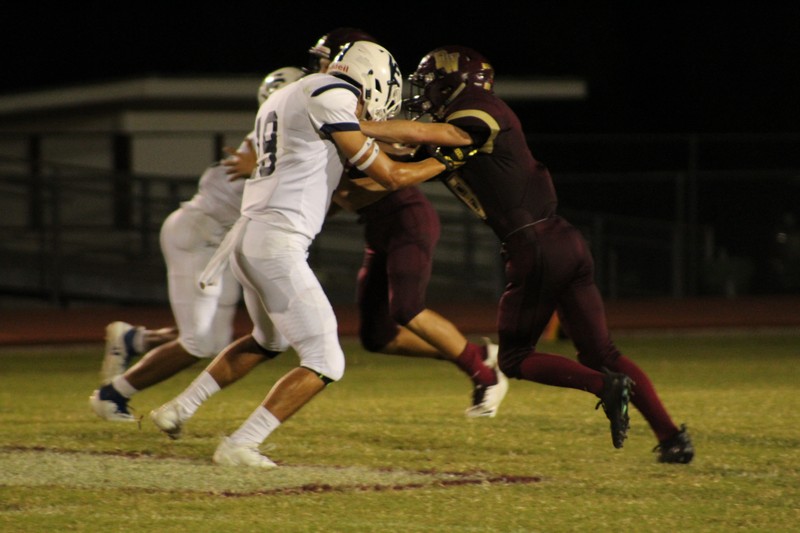 Click here for photos of Devine’s game vs Central Catholic!

“Our special teams accounted for seventeen plays on the night,” stated Special Team Coordinator Scott Taylor. “On the three kickoff returns, Guido Zapata returned one for 22 yards to open the game and give our offense decent field position. Isaiah Oropeza wisely used the new rule of using a fair catch inside the 10-yard line to give us the ball at the 25 without any time coming off the game clock. Inside the stadium, it did not sound as though many fans did not know the new rule.
Our kickoff coverage broke down on the first kickoff giving up a 43-yard return before the Warhorse trio of Joey Seguin, Jayce Hackebeil, and Colin Dishman saved a touchdown with a gang tackle. Blaine Miller contributed a solo take down on the third kickoff after Central returned it only five yards.
Our punt team had to work on three occasions with Chad Lawson tagging three punts for an average distance of 36.6 yards. The first one boomed 47-yards into their end zone for a touchback. The second was shorter, but downed effectively with no return, and the third one was fumbled by their returner and stayed on the ground (for what seemed like seconds) before Central was able to scoop it up to get three yards. Hack and Sergio Martinez teamed up for that tackle.
Sergio kicked an extra point after the first Warhorse touchdown.
With the Warhorse defense forcing five punts on the night, Guido returned two of them but only gets credit for 15 return yards because the longer run of 22 yards was negated by a very close block in the back call.
Overall, I feel it was a good night for our special teams. We will continue to work hard and look for weaknesses to take advantage of in the kicking games.”
By Jerel Beaty
Staff Writer