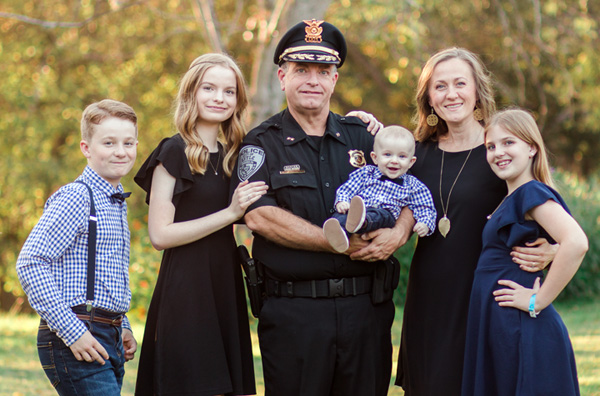 Today we would like to highlight and honor a dedicated public servant with a true public servant’s heart…Lytle Police Chief Richey Priest. He began his work in public service when he was just a teenager at Lytle High School. He has served with Lytle PD for over 24 years, but he started off his long career in public service as a volunteer fireman over 33 years ago, watching over the same hometown he serves today….same hero, different uniform.
“I went to my first meeting to join the Lytle Vol. Fire Department, and by early 1988, I was a member and responding to fires and emergencies, while still a high school student,” Priest says. I loved being a volunteer firefighter and went on to also join Lytle EMS as a volunteer.”
In the late 80s and early 90s he served on the ambulance. It wasn’t his favorite job, “but somebody had to do it,” he said.
Priest was also appointed as a volunteer Asst. Fire Marshal for the City of Lytle, serving with long-time Lytle Fire Chiefs and Fire Marshals Louis Trouart and Verlon Caraway.
In the fall of 1990, he took a leap and decided to attend the San Antonio College Law Enforcement Academy. Following graduation, he served as a Reserve officer for Bexar County, Medina County, and Natalia PD over the next 5 and a half years.
One day, he was contacted by former Lytle PD Chief, Kathy Ray.
“She was very shorthanded and needed some help,” Priest said. “I lived there in town and owned a business there, so I felt like it would be a good way to help out. So, in March of 1997, I started my Lytle PD career as a Reserve Officer. It was about this time that I had too much going on to stay active with the Lytle VFD, so I only had one volunteer job and it was Lytle PD,” Priest said.
Over the next couple years, he was promoted to Sr. Officer, Corporal, and Sergeant while still working as a reserve; he was supervising a handful of full-time officers while continuing to run the family business that paid the bills.
In August of 1999, Priest took the reins of the department as the “acting / interim” chief.
“It was fun and challenging,” Preist said. “H.E.B. had recently opened and Lytle finally had a little tax money to spend. I was anticipating they would advertise to fill the position and I would simply not apply and I would be able to scale back my police duties and get back to focus on my business. After all, taking the Chief’s job would be a huge cut in pay and I would lose the freedom of being my own boss.”
However, the City had other plans.

“The Mayor and City Council opted not to advertise the position and it was offered to me as an internal promotion. It was a tough call; I had recently become engaged. I had to figure out what to do with my business and see how Kaycee (my fiancé) thought about going from marrying a successful business owner to small town police chief making $28,000 a year.bn The rest of that story is history, Kaycee signed on with the plan. In Oct. of 1999, I was appointed full-time Chief of Police at the ripe age of 29. A few months later I was married and by mid-2000 I had closed down my restaurant and was focusing on my new career.”
In 2009 he was appointed the Fire Marshal as well, so he also handles fire inspections and fire code enforcement for the city.
“I have really enjoyed seeing all the changes and growth in Lytle, but I miss a lot of old friends that have passed on. Many of them helped shape who I am, guys like Ernie Kroeger who I served with on the Lytle Fire Dept. in my early years. I am happy to say that in my over 22 years as Chief of Police it has been a lot of fun. I have never dreaded coming to work.”
In fact, he loves what he does so much, he adds, “The truth is this doesn’t even really seem like a job to me.”
A true public servant, Chief Priest is always ready to answer to the public, and he goes above and beyond to be transparent with the community he loves.
“My Views on Public Service: Too often public officials, appointed or elected, tend to get too focused on themselves. It is easy to start to believe the world revolves around us and every move we make. My job, and the job of all public servants is to take care of the necessary functions (which are very important) provided by the government so our citizens can focus on what is important to them Faith, Family, Friends, Etc. We are here to provide the police protection, roads, water, sewer, fire protection, etc. While a new sewer plant may seem important to us…. or a new police station. I doubt that anybody will sit around the living room with their grandkids and talk about their childhood memories of when the city put in a new water line, or a new sewer plant, or started streaming council meetings on YouTube. We are supposed to take care of that in the background, so that people can make important memories and live their life,” Priest adds.
His wife, Kaycee, comments, “Richey LOVES what he does….I am so proud of him and so are our kids. I believe what he does truly is a calling. God has placed him in this position and our family will always support him. It has been hard on me and our kids at times – because it is 24/7. When we take vacations… he’s working – answering the phone, emails, etc. His “days off” are not really days off….At the end of the day, I know it’s just who he is. He couldn’t do it any differently. His heart is all in. He loves this town.”
Fire Chief Matt Dear, who also works as a Lieutenant at the PD, stated, “Richey is easy to work with. He is understanding. He takes stuff serious, but not serious all the time. He is a great administrator. He actually listens to his guys. When he came in, he brought us into the 21st century with police technology. We had body cams long before people knew what body cams were. We are always on the forefront of technology that helps us keep the community safe. He truly cares about the community, and the safety of it.”
Mayor Ruben Gonzalez adds, “Richey is one dedicated city employee to our community. As a police chief, he brings his expertise to taking care of our community, and part of that is he is a great communicator. He has great ties to the community and he listens to folks in our community for their input, and I think that makes him one of our strongest assets in the community. It enhances his ability as a police chief and being able to keep us safe. He always takes the time to plan things out and make sure we can take care of whatever it is in front of us, whether it is the Winter storm or the hay ride. He is always ready to help everyone out. I would also like to thank his wife, Kaycee, and the kids, because being a police chief is not only him, it’s a sacrifice for the whole family. He’s had to break away from dinner many times to handle a situation going on in our community, and we thank his family for their dedication to our community.”
By Kayleen Holder
Editor