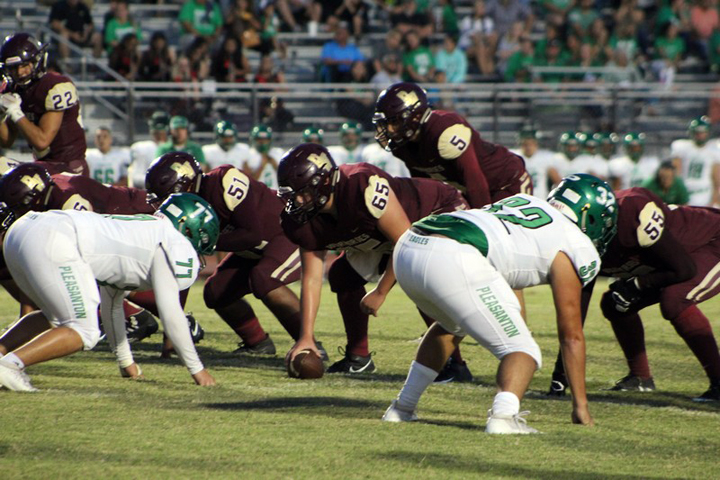 The Devine Warhorse football team travels into San Antonio to take on the Central Catholic Buttons Friday night. The Horses are coming off a 23-41 loss to Pleasanton while the Buttons are trying to rebound from a 0-29 whitewashing at the hands of Austin Regents.
Central Catholic comes into the ballgame at 2-2 while Devine is 1-3. The Buttons tough schedule has included wins over San Antonio Christian and Seguin, and tough losses against two perennially good teams in Holy Cross and Austin Regents.
“We will definitely have our work cut out for us,” Head Coach Paul Gomez said in facing Central Catholic. “They are a TAPPS 6A school so they definitely have plenty of players to choose from, but we are excited for the challenge.”
It is no secret that Devine’s football schedule has always included good pre-district competition. Playing quality opponents early in the season in order to prepare for a district championship is an annual occurrence around this town.
Gomez also stated, “Playing good teams brings out character from within our players. Being in tough situations will help us be the best person that we can possibly be. Learning to overcome and push through the tough times will make a better player. Getting tested allows to reach down deep inside and become mentally stronger.”
Offensively, Central Catholic has a transfer quarterback in Christian Allen who is a very good player. He is a dual threat in the fact that he can hurt teams in the running game but throws well enough that defenses cannot stack eight defenders in the box.
As is the case most games, the Buttons offensive line will be good-sized young men. Their running back runs hard and is one of their key weapons. Their receivers do a good job running their pass routes.
Defensively, they have some hard-nosed guys who play good technique and are well coached.
“Coach Santiago and his staff do a great job over there,” Gomez finished saying. “We definitely have to be ready to leave it all out on the field. Turnovers and execution will be the key to the game. We will have to take care of the ball on our end and try to get some turnovers to go our way on defense. We have to execute our game plan on both sides of the ball.”
Kickoff is set for 7:30pm.
By Jerel Beaty
Staff Writer