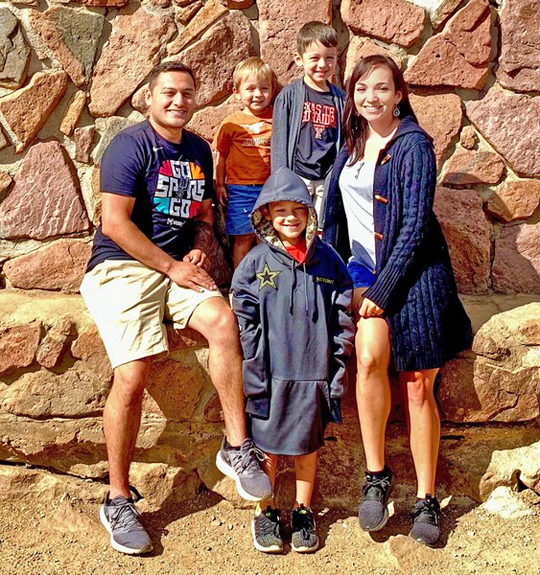 Did you know….1 in 8 women will be diagnosed with breast cancer in her lifetime? Breast cancer in young women is rare, more than 250,000 women living in the US today were diagnosed with it under age 40.
A week before her 30th birthday, Nanette Rizo, a young woman who calls our community home, walked into the Women’s Imaging clinic at Fort Hood. A week later she received a call that rocked her world…..breast cancer. Mrs. Rizo and the family’s three children reside in Lytle, while her husband, Joel, is active duty Army and currently stationed in South Carolina. The young mother began chemotherapy last week, and friends, family, and community are coming together to help the Rizo family in this time of crisis.
“I was there for a biopsy of a lump in my right breast. This happened once before when I was 19, and it was benign. So both myself and my medical team figured it was the same thing, but my doctor suggested a biopsy just to be safe, as one side of the lump had a tiny spot that just didn’t sit right with him. Better safe than sorry,” Rizo recalls.
“A week later, the day before my 30th birthday, I received a phone call that my biopsy results were in, and I needed to come in right away. Joel left work to meet me at the hospital. About 30 minutes later, our world was rocked. Cancer.”
Unfortunately, Joel had to leave for South Carolina, the week after the devastating diagnosis. He won’t return home until December.
“The doctor admitted he never thought it would come back this way. He’d only biopsied to be safe. He kept apologizing, but I will be forever grateful for Major Silvester. He might have saved my life. He noticed something so tiny that anyone else might have overlooked because I was only 29….I had no family history of breast cancer….I was otherwise healthy. This didn’t happen to women like me….except it does.”
“There is no routine breast cancer screening for women under age 40. So please – check your breasts. Check them regularly and thoroughly. Go see a doctor the minute you’re concerned. Push for every exam. You never think you’ll be in that small percentage until you are.”
“As of now, I am in stage 3A with invasive ductal carcinoma that has spread to my lymph nodes. It is a grade 3, and a subset called Triple Negative. All of that translates to it being very fast, very aggressive, and has a higher rate of recurrence.”
“My husband is active duty Army, and is currently attending school in South Carolina to become a drill sergeant. Our children and I moved home to the Devine area (Lytle) for support during treatment. Upon my husband’s return, he will be assigned to Fort Sam. I am already receiving top notch care at BAMC in San Antonio.”

One of Rizo’s best friends started a fundraiser for the Rizo family. Due to the aggressive nature of the chemotherapy she’ll be receiving starting October 18th, her youngest child will need to be in full time care, which also comes with cost.
“I will unfortunately be unable to work, so we will continue to be a single income family throughout this chapter of our lives. Post chemo, I will undergo a double mastectomy, followed by radiation. We have 3 boys – ages 6, 4, and 3. The two older boys attend Lytle Primary, and our youngest will be in a private preschool. We have been all over, courtesy of the Army. While we knew we’d always settle down back close to home, we never thought it would be under these circumstances. If you find yourself wanting to contribute, please know that it is met with the sincerest gratitude. If not, we totally and completely understand. We will happily accept prayers and well wishes.”
There is no effective breast cancer screening tool yet for women under 40, most of whom have dense breast tissue that prevents routine mammograms from being a useful screening tool.
“I had no symptoms, at all, other than the lump that I felt while pressing against the skin. The concerning area on what we now know as the tumor was only visible to the doctor on the ultrasound. Now that it has progressed, the area of skin over the tumor is red, itchy, and the skin is dry. Breast cancer is largely symptom-free, which is why it often goes undetected until progression reveals a palpable mass. Adding in that there is no routine screening for women under 40, breast cancer is often not caught until later stages in young women.”
“I just want women to know that just because they are young or they don’t have any relatives with breast cancer doesn’t mean they should ignore any potential concerns. Roughly 70% of breast cancer patients have no significant family history. So don’t reason yourself out of asking your provider to check it out. Stay vigilant with your self-checks, and the moment you’re concerned, let your doctor know that you want unequivocal answers,” Rizo adds.
Rizo recently discovered that she carries the BRCA1 gene mutation which could have forewarned about the likelihood of developing cancer, had she known how important the preventative test really was years ago.
“If your health insurance will cover it, please inquire with your primary care physician about a referral for genetic testing, especially if you have any family history of breast or ovarian cancers. Women who carry the BRCA1 and BRCA2 gene mutations have roughly an 80% increase in developing those. For me personally, if I’d been more informed and accepted the testing when it was first offered to me about 5 years ago, there is a good chance I could have avoided all of this,” Rizo said.
“It is just a simple single vial blood draw. I was in and out of the lab in quite literally a minute from sitting in the chair to having the site bandaged and being sent on my way.”
“If I had done the test 5 years ago, I would have taken prophylactic measures, and I probably wouldn’t have be in this fight for my life right now. Life is precious and we only get one shot. Make the most of it.”
“They tested me during the time I was receiving additional imagining and testing at BAMC to see just how far cancer cells have spread. The genetic panel testing was very important to my care team. Given my age and the fact that this is cancer ‘normally’ found in older women, my team was confident I’d be positive for at least one of the gene mutations….almost as if it was the ’cause’ per se. It also plays a big role in my future surgical treatment options. Knowing I carry this gene and that I already have breast cancer, my ovaries need to be removed. Ovarian cancer can be even harder to diagnose, which is why it is one normally found only once it is in a more advanced stage. So given all the facts of my case, and that my husband and I are done having children, I will now for sure be needing a double mastectomy and will also undergo a full hysterectomy. The name of the game is to make sure this cancer has nothing to come back to once we get rid of it because the subtype I have has a higher recurrence rate.”
Nannette is the daughter of Rick Covarrubia, and granddaughter of Emily Covarrubia of Devine. Her husband Joey is the son of Cindy and Steve Rizo of Devine.
“My family has really rallied around me and has supported me so much, even if it means rearranging their lives to help me,” Rizo said with great appreciation of the way her family and friends have come together to help.

How you can help
You can contribute to the fundraiser by donating on GoFund me or by mailing donations to 815 Ross Ave Devine, TX 78016. Go to GoFundMe.com and type in Nannette Rizo or follow the following link.
https://www.gofundme.com/f/nannettes-cancer-relief-fund?utm_source=customer&utm_medium=copy_link&utm_campaign=p_cp+share-sheet&fbclid=IwAR2cdcFZ7slMJI-atZuEHShwhXwXw2ID4VU2dPfyK3GSpJQ-IDWq4SbnXLI