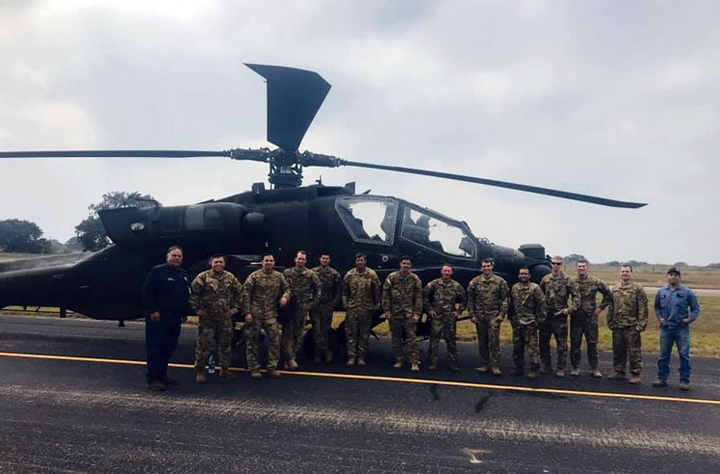 These United States Army Apache Helicopters equipped with a 30 mm chain gun, rocket launchers, and hellfire missile launchers just Returned from Afghanistan flew right over Devine this past Monday.
Residents say it was an amazing sight to see, as they flew “low and loud.” Some described the awesome roar of the Helos as “the sound of American Freedom.” 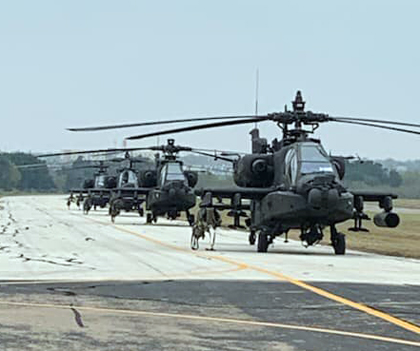 The City of Pleasanton commented, “Today was history in the making at the Pleasanton Municipal Airport as 6 United States Helicopters landed. The crews of the C/1-501 Attack Reconnaissance Battalion, 1st Armored Division just returned from Afghanistan a few weeks ago, and then went to pick up the Helos which were shipped from Afghanistan to the Port of Corpus Christi this week. The crews were headed back to Fort Bliss in El Paso, Tx.”
The Airport Staff greeted the Army Crews and provided hospitality as the Helos refueled in Pleasanton.
One local resident commented, “These AH 64’s Flew Over the Ranch Today. Crew of 2, each equipped with a 30 mm chain gun – rocket launchers – and hellfire missile launchers! Just Returned from Afghanistan – Pretty Cool! They were flying Low and Looked Mean as Heck!”
Airport Manager, John Roberts commented, “We were all overwhelmed. It’s not every day that you get to see something like that. To see all six of these come in together was just the most amazing thing. I’d say each one of them was about the size of a bus. It was an honor to have these guys stop at our airport.”