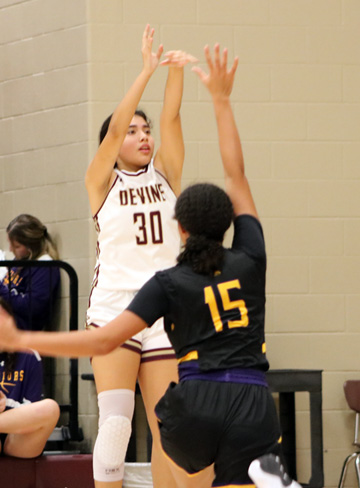 We really had a great week of basketball coming out of the Thanksgiving break. On Tuesday, November 30th, we defeated Pieper HS here at home. The Arabians got off to a decent start, but we struggled with foul trouble a little towards the end of the first half. We finished off the half with the lead, but we struggled a bit at the end of the half on both ends of the floor. They came out in the second half and played really well and we played good, solid defense on Pieper’s dribble drive offense and did a great job of keeping them in front of us. The team was also able to settle in and get some good shots in the 3rd quarter. We finished that quarter on a big run and that allowed us to take a lot of momentum into the 4th quarter. The Arabians did a great job of rebounding in this game and we finished the game off strong and got a solid victory at 53-17.
Andrea Rios 2 points, 2 rebounds, 1 assist. Lacey Shook 2 points, 4 rebounds, 1 steal. Macey Hein 21 points, 2 rebounds, 1 assist, 3 steals. Kendall Marek 2 points, 6 rebounds, 3 assists, 1 steal. Yessika Garza 14 points, 18 rebounds, 3 assists, 2 steals. Kadence Yeats 6 points, 2 rebounds. Joselyn Guajardo 2 points, 3 rebounds, 2 assists, 1 steal. Denise Contreras 1 rebound. Cece Martinez 2 points, 1 rebound. Liah Romero 2 points, 5 rebounds. Q1 10-5, Q2 18-12, Q3 33-18, Q4 53-27. FTP 82%.
The Arabians started the Marion tourney off with a tough, physical game vs Yoakum. We had a tough shooting 1st half and Yoakum’s aggressiveness took a bit for us to settle into. The Arabians really got going in the second half and once we settled in, we got into a groove on both ends of the floor. Our defense was solid in the 3rd quarter and we executed well on the offensive end that quarter as well. We really did a good job of extending the lead in that 3rd quarter and we did a good job of slowing down in the 4th quarter and working the clock to come away with the win.
Rios 2 rebounds. Shook 2 points, 2 rebounds, 1 steal. Hein 21 points, 3 rebounds, 3 assists, 7 steals, 2 blocks. Marek 7 points, 8 rebounds, 2 steals, 1 block. Garza 12 points, 10 rebounds, 1 assist, 6 steals, 1 block. Yeats 3 points, 3 rebounds, 2 steals. Guajardo 3 rebounds. Contreras 3 rebounds, 2 steals. Martinez 1 rebound, 1 steal. Romero 1 rebound. Q1 10-8, Q2 20-20, Q3 36-24, Q4 45-32. FTP 38%.
Our second game of the tourney was against a very scrappy Carrizo Springs team. We struggled to match Carrizo Springs’ energy early and they did a good job of making tough shots to take a 1 point lead after the first quarter. In the second quarter, we were able to do a better job of matching Carrizo’s energy and we did a great job of getting stops. We also got out and got some easy points and got our offense going. In the second half, we were the team with the most energy and intensity. We got stops on the defensive end and we shot the ball really well on the offensive end of the floor. Again, our good third quarter allowed us to pull away in the second half.
Rios 3 points, 2 rebounds. Shook 8 points, 4 rebounds, 3 assists, 1 block. Hein 17 points, 3 rebounds, 4 assists, 2 steals. Marek 2 points, 5 rebounds, 1 assist, 1 steal. Garza 13 points, 10 rebounds, 3 assists, 3 steals. Yeats 9 points, 3 rebounds, 2 assists, 2 steals. Guajardo 2 rebounds, 2 assists, 2 steals. Mackayla Schnautz 1 point, 4 rebounds. Contreras 4 points, 3 rebounds, 2 assists, 1 steal. Martinez 2 points, 5 rebounds. Romero 2 points, 5 rebounds. Q1 9-10, Q2 25-19, Q3 47-29, Q4 61-35. FTP 56%.

In the second day of the tournament, we played a good and undefeated Poth team first on Day 2. We really came out with great energy in this game against the #3 state ranked team. We made some shots early and we did a really good job on the defensive end of keeping Poth’s dribble drive offense in front of us and not allow them to get to the paint. We didn’t make a field goal, but our defense kept us in the game during that time and we got to the line some to be able to score. The Arabians also rebounded the ball well and we were aggressive on both ends of the floor in the first half. In the second half, we did a great job of staying aggressive but also playing a bit more under control. The offense got going and we really got stops on the defensive end that enabled us to extend the lead and take control of the game in the second half. We did a good job of handling the different defenses that Poth threw at us late in the game as well. This was the best we have played on the defensive end of the floor this season. I was super proud of the effort the girls played with.
Rios 1 rebound. Shook 2 points, 1 assist. Hien 18 points, 6 rebounds, 1 assist, 3 steals. Marek 4 points, 7 rebounds, 1 steal. Garza 11 points, 7 rebounds, 1 assist, 6 steals. Yeats 11 points, 3 rebounds, 2 steals. Guajardo 1 steal. Schnautz 1 rebound. Contreras 4 rebounds, 1 steal. Romero 2 rebounds. Q1 17-6, Q2 20-15, Q3 35-22, Q4 46-25. FTP 75%.
The Arabians second game of the day was against Davenport. We had a long time between games but the girls handled the break well. They did a great job of slowing down Davenport’s scorers, we rebounded the ball well, and we did a great job of sharing the ball in this game. Davenport played a lot of different defenses and we did a good job of handling what they threw at us. The win put us into the Championship game vs Marion!
Rios 2 points. Shook 1 point, 2 steals. Hein 17 points, 9 rebounds, 4 assists, 3 steals. Marek 11 points, 7 rebounds, 1 assist, 1 block 1 charge. Garza 22 points, 11 rebounds, 2 assists, 1 steal. Yeats 2 points, 4 rebounds, 2 assists. Guajardo 1 point, 3 rebounds. Schnautz 2 rebounds. Contreras 8 points, 3 rebound, 1 steal. Martinez 1 rebound. Romero 1 rebound. Q1 22-13, Q2 35-23, Q3 54-32, Q4 64-40. FTP 71%.
We knew Marion would come out excited and ready to play in the championship game. The team did a good job of withstanding their initial surge and we played really well in all aspects of the game. Playing great defense, rebounded the ball well, and shooting the ball really well on the offensive end. The girls executed well in this game as well and it was a really nice win. We did a great job of controlling the pace of the game and playing at our pace. Everyone really played well – and played their role – in the championship game. It was one of the best games we have played this season. I am very proud of the effort and intensity we played with.
Rios 6 points, 2 rebounds, 1 steal. Shook 8 points, 2 steals. Hein 28 points, 7 rebounds, 5 assists, 5 steals. Garza 4 points, 6 rebounds, 2 assists. Kelsey Dishman 2 points. Yeats 9 points, 3 rebounds, 1 steal. Guajardo 2 rebounds, 3 assists. Schnautz 2 rebounds. Contreras 2 points, 1 rebound, 5 steals. Martinez 2 points, 4 rebounds. Romero 3 rebounds. Q1 15-10, Q2 31-13,Q3 51-16, Q4 67-24. FTP 67%.
Macey Hein was selected as the tournament MVP. She did a great job during this tournament by playing aggressively and playing smart. She looked to score for us when needed and she also did a great job of distributing the ball for us as well. She really did a great job of controlling the pace of the game for us and she did a good job being disruptive on the defensive end by pressuring the ball. I was proud of her and her play during the tournament.
Yessika Garza was selected to the All-Tournament team. Garza had a great tournament as well. She played with a lot of intensity and she did a great job of rebounding for us and she had multiple double digit rebounding games for us this week. She also had a couple of big scoring games for us as well.
In all, the girls had a really good week! I think we figured some things out and are getting better every game. Lots of kids are contributing for us now. We need to continue to work on improving as we approach the break. We host our home tournament, The Devine Shootout, this weekend and I think we will play some good competition during that time. I really think that our tourney will provide us with a good test. We ended the weekend 11-4 overall.
By Coach Jim Sessions and Dicy Chambers