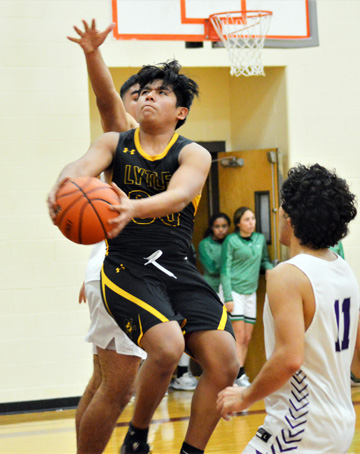 Playing hard at the Poteet Varsity Tournament, the Lytle Pirates came out 3-1 with two players named to the First Team All-Tournament. Senior Bryson Duty and Junior Malakai Castro were the players named and Coach Jacob Hernandez is proud off his whole team’s hard work.
Before the tournament, the Pirates traveled to YMLA and fell 71-54. “This year no matter the pre-season or current state ranking we have been given, I made sure we could play as many city teams as possible to prepare us for a playoff run. Tuesday night’s beating humbled us all and proves we still have a lot of work to put in. Over the next few games, I will only be providing defensive stats as we get back to basics this afternoon on the defensive side of the ball. We’ve built success on pressing and playing defense and have gotten away from it,” said Coach Hernandez.

Matt Sanchez led the scoring with 17 points, Jordan Balderaz with 12 and Jalen Guevara with 8 points.
The JV also fell to YMLA 41-51. Zachary Perez led with17 points, Jaden Perez with 10 points, and Tristan Guevara with 9 points.
Facing YMLA first, it was a revenge win at 61-47 after losing to them on Tuesday. They next beat Pearsall 66-63 in an exciting game.
Friday they beat Randolph 48-36 to move on to face a tough 5A school. “But after three tough wins our legs wore down and we lost 72-55. It was a great showing with the Pirates going back to basics and playing defense first. The Pirates averaged 14 steals, 12 deflections, and 18 forced turnovers per game,” said Coach Hernandez.
Now #15 in the state, the Pirates are 7-3 and will face SA Stacey at home this Friday at 7:30.
By Dicy Chambers
Sports Writer