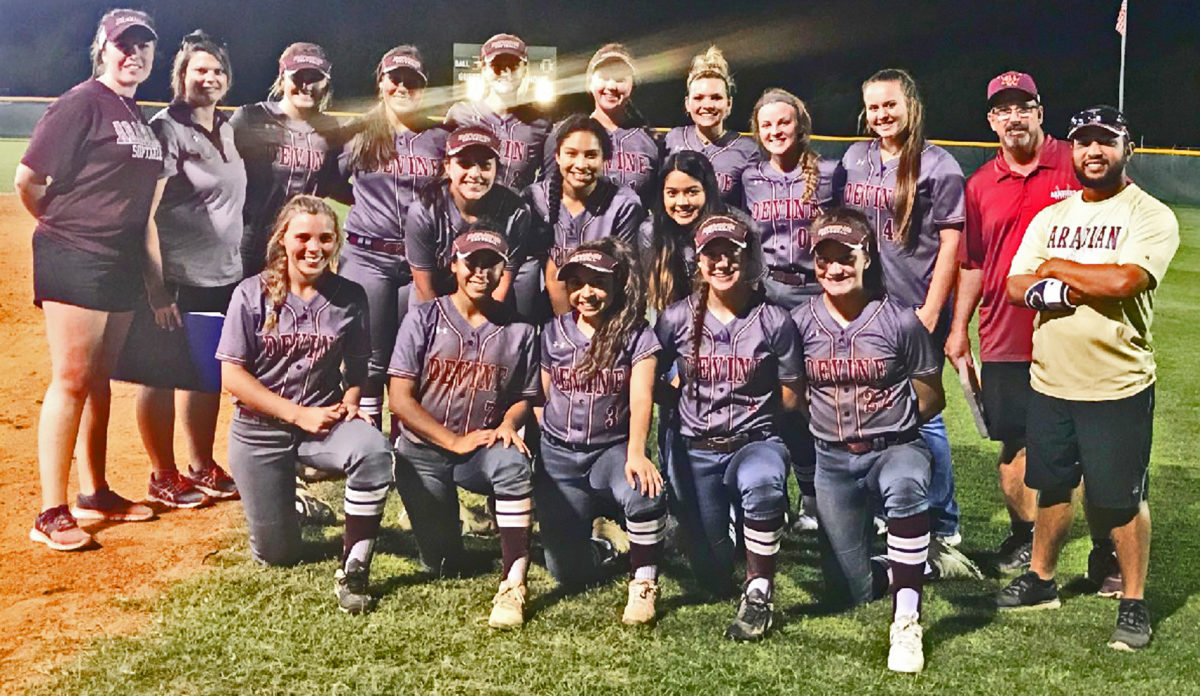 Thursday night Devine and Pleasanton played for a winner take all one game Bi-district Play-off at Tejeda Field in San Antonio. The visiting Arabians had multiple opportunities to score but came away empty until the 7th when, Mackenzie Schneider started a 2 out rally with a base hit ground ball in the gap between third and short. Julie Ortiz singled to center and again the Arabians had something working. Taylor Carr who had been nothing but spectacular all night stepped in the box. Tensions were high with Mackenzie Schneider 120 feet from home plate on third and two outs, but Carr delivered with a line drive to right center. Schneider was not going to be denied as she turned for home showed the crowd her regional speed and an aggressive slide at the plate. SAFE, SAFE, SAFE, she is SAFE was the call and the Arabians had scored the first run of the game. Carr and Ortiz advanced an extra base each on the play at home and again the Arabians were sitting pretty. Jeanette Rios line drive down the first base line had everyone running. The Eagle defense was moving, the Arabian baserunners were hauling tail, and Rios advanced to second, Ortiz & Carr scored to push the score to 3-0.
Now it was time for the defense to shine. High pop fly to Julie Ortiz and the first out was in the books. A Texas leaguer line drive deep in the gap between third and short looked like a base hit but Jeanette Rios came from nowhere to make a diving catch that would be a definite top ten on ESPN for out number two. The third out would be the 6th K of the night for Taylor Carr but this one would end the game.
Impressive highlights came from all over the field on both offensive and defensive plays. Taylor Carr had six strikeouts, gave up two walks and two hits and had an RBI and single. Jeanette Rios was a defensive highlight film with two RBIs. Kendall Arche had a line drive to center. Jessie Ramirez had a line drive to right, smothered a hard hit ground ball drive down the line at first. Meagan Runyan had a line drive to right. Allyson Taylor was a wall behind the plate as catcher. Halle Hagdorn made some incredible stops at third. Mackenzie Schneider had a ground ball single in the gap between short and third and later scored on Carr’s single. Julie Ortiz had a line drive to center and a great flip to first on a very tough ball.
In this important game, “we had 7 hits, 3 runs 3 walks no errors. We have been playing at a high level for the last couple of weeks it is pretty awesome to watch this team come together,” said Coach Mark Mangold.
The Arabians have an overall record of 20-14, went 5-3 in district to take second place and are now the Bi-District Champions. The Arabians will face Rio Hondo in their next game for Area on Friday, May 4th at Tulosa-Midway at 7:30 pm. Rio Hondo beat Robstown 2-0.
Elsewhere in the area, Pearsall beat Poteet 2-0 and will face either Zapata or Sinton at area. Carrizo Springs lost to Jones 0-19 and Lytle lost to Cuero 0-2. Natalia beat Florence and will face either Hallettsville or Tidehaven. Jourdanton beat Lago Vista 3-2 and will face Schulenburg next, Poth lost to Blanco 0-7, and La Vernia beat Boerne 8-0.
By Dicy Chambers and Mark Mangold