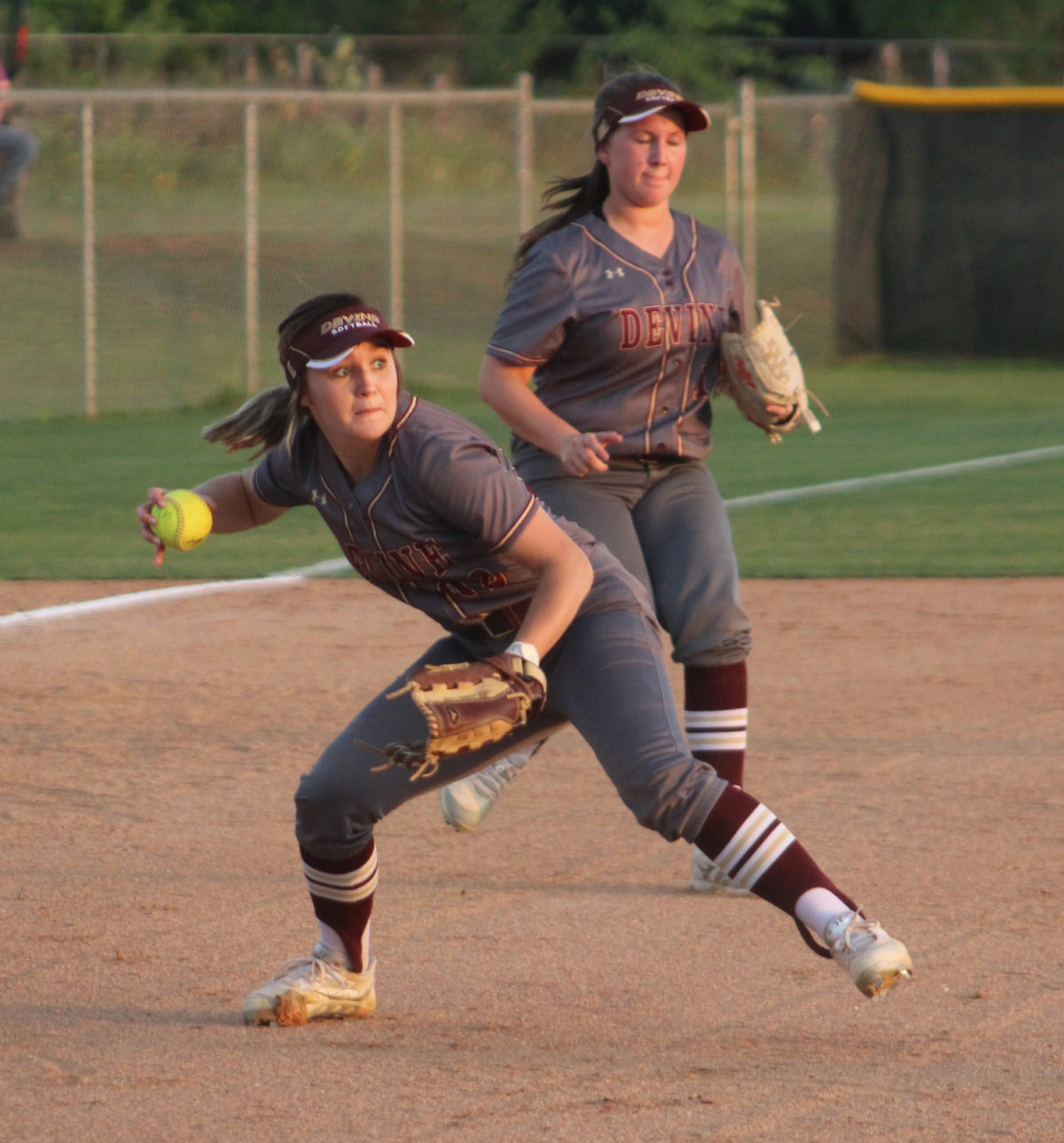 The final district game for the Arabians was against the district leading Lady Mavericks of Pearsall. Following a good win and some upbeat practices, we felt good coming in. Taylor Carr ripped the first pitch of the game into left center for a double and we felt even better. Jeanette Rios drew a walk and Kendall Arche had an RBI single to score the first run of the game. Allyson Taylor beat out and infield hit to score Jeanette Rios and the inning ended with the Arabians up 2 – 0. Mackenzie Schneider walked to lead off the second inning. Julie Ortiz reached on a Maverick error and Schneider scores on an overthrow back to the pitcher. No more scoring for the Arabians until the sixth inning. There was a two out rally when Julie Ortiz drove a double past the third baseman for a double. Carr sent Ortiz home with her second base hit/RBI of the game. Pearsall scored in the 7th but the Arabians stopped all scoring when the Lady Mavs tried to stretch a double into a triple and was thrown out by Taylor. Carr recorded her biggest strikeout of the game by sitting down Pearsall’s leadoff hitter and to close things out again Halle Hagdorn flagged a hard hit ground ball at third and ended the contest with a final out with a good throw to Jessie Ramirez at first.
“Carr was amazing tonight in fact our whole team was amazing. The Arabian defense would bend but not break we made great plays all over the field. We made shoestring catches in right and at second, we ran down fly balls in the outfield and at shortstop, we kept batters off balance and threw people out at third and second trying to steal bases. This was a fantastic win but more importantly, it was a complete team effort,” stated Coach Mark Mangold.
A seating game had to be played between Devine and Lytle for second place and the Arabians won 7-1. Pitcher Carr was ready for action, leading off with a double; again she got the ball rolling early. This set the tone for the rest of the evening. Although we didn’t score in the first inning, we forced Lytle to make defensive play after defensive play. Taylor lead off the second with a base hit, Hagdorn drew a free pass and Schneider drove in the first run of the game with a single to left field. Clinging to a one-run lead the Arabians gained some ground by plating 5 more runs. Ramirez led off with a single and later would score on a wild pitch, Megan Runyan was HBP and Taylor loaded the bases with her second single of the game. With one out, Schneider hit another line drive for her second RBI of the night. Ortiz drove in a run, Carr walked, and Arche drove in the next two runs and the Arabians were dancing. The Arabians would add an insurance run in the 6th when Rios scored from first on an Arche double to right center field.
“We played great again tonight, Carr pitched another solid game only allowing three hits and gave up three walks, (two were semi-intentional) and the defense was stingy making 18 defensive plays. This was a huge turn around/statement district game for the Arabians,” stated Coach Mangold.
Key plays for this important game were Carr recorded all three outs in the first inning, one in the second, third, fourth, sixth and seventh, Carr, Taylor and Ramirez turned a no out 1-2-3 double play in the seventh, Hagdorn made three defensive plays at third, two in the fifth inning, and Rios made four defensive plays at short two in the 6th inning. Arche hit .500 with a single and a double two RBIs, Schneider .750 with two RBIs, and Taylor hit .500 with two singles.
Ending district 5-3 after beating Pearsall, the Arabians are second in district after beating Lytle for the spot. Pearsall won the district, Lytle third and Carrizo Springs took fourth. Devine will face Pleasanton at a neutral sight on Saturday according to the UIL website. Pleasanton went 4-4 in their district taking third. Devine’s current overall record is 19-14.