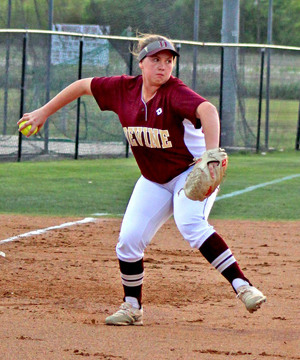 With Mackenzie McClellan in the pitching circle, the Varsity Arabians made quick work of the Hondo Owls in a shut out game April 2nd. With only 5 hits allowed, McClellen threw 43 strikes in 67 pitches. But it was not just the pitching that won this game. Offensively the Arabians were able to get 10 hits off of Hondo’s pitcher. The game was called after the top of the fifth inning with Divine ahead 10-0.
Bottom of the first, Julie Ortiz hit a single to right and Jeanette Rios walked to bring up Kendall Arche. She hit a sacrifice fly to bring home Ortiz and put Devine on the scoreboard first. Jessie Ramirez hit a 2 run homerun, Megan Runyan single to center, Allison Taylor walked, Arieana Ramirez singled and Runyan scored. McClellan hit the ball into the first baseman’s glove. Mackenzie Schneider singled to center and A. Ramirez scored. Ortiz walked to load the bases. Rios walked and forced home A. Ramirez. Arche hit a grounder and made it to first after an error by the shortstop while Schneider scored. J. Ramirez hit a fly ball into center for the third out of the inning. Devine led 7-0.
Bottom of the second, with Runyan on third, Lindsey Herrera running for McClellan, and Schneider at bat, Runyan stole home. Bottom of the third, Rios on second, Arche on first, and Runyan singled to center and Rios scored. Bottom of the fourth and Devine’s final at-bat; McClellan singled to shortstop, Schneider walked, and Ortiz hit a hard grounder to short to bring home Herrera, who was running for McClellan, for the final Arabian run of the game. Devine won 10-0.
Ortiz 1 run, 2 hits, 1 RBI. Rios 2 runs, 1 RBI. Arche 1 hit, 1 RBI. J. Ramirez 1 run, 1 hit, 2 RBIs. Runyan 2 run, 3 hit, 1 RBIs. A. Ramirez 1 run, 1 hit, 1 RBI. McClellan 1 hit. Schneider 1 run, 1 hit, 1 RBI. Dasslyn Coronado 1 run. Herrera 1 run.
“The coaches and I are very proud of our girls as they came out ready to play. Our girls played with confidence, and excitement on Tuesday night. That is the type of softball this group is capable of playing. Our goal is to win every inning and that’s exactly what we did. We will continue to work hard in practice, focus on the little things, and not overlook any opponent as we battle for a district championship. Go Arabians!” stated Coach Juan Gonzales .
By Dicy Chambers
Sports Writer