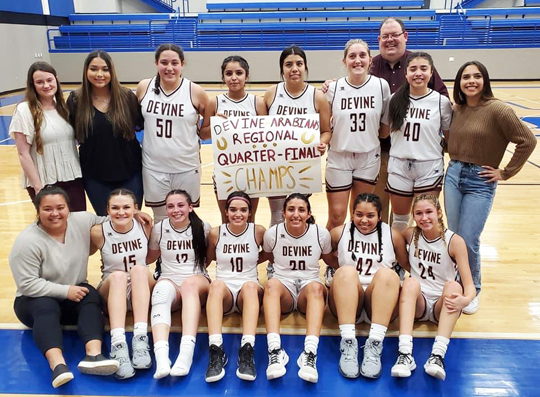 The Arabians season ended Friday night against the Boerne Greyhounds. Undefeated in district and 29-8, this season goes down as another great year for Coach Jim Sessions. He and his team work hard through injury and loss to earn a spot as one of the last 8 teams standing in the playoff tournament. Congratulations to the Arabian basketball players in all they have accomplished!
After beating La Feria 49-23, Devine moved on to face King in the Regional-Quarter Finals on Tuesday night. The King Brahmas beat Raymondville 54-32 at Bi-District and then beat Crystal City 44-35 to make it to the Regional-Quarter Finals and were 2nd in their district with a record of 7-3 and 24-12 overall. With just 16 teams left in playoffs, Devine knew they would have to be on top of every ball movement.
The Arabians started the game on defense and the Brahmas score with a three-pointer. Hein quickly knocked the ball out of the Brahmas hands and into Yeats who drove it down court and passed to Shook for an easy layup. The teams traded back and forth with no scoring until Hein was fouled shooting and tied the game up at 3-3. Yeats dove to the floor to tie the ball up. The Arabians used this possession to run their offense and after several rebounds, Hein passed into the key and Garza made the basket to pull ahead. Rebounding off a missed layup, Garza put the ball back up for two. Another stolen ball taken back to the Arabian end and Yeats sank a three-pointer. The scoring streak continued with a layup from Garza and Devine was up 12-3. The Brahmas did not know how to deal with the Arabian defensive pressure and could not get the ball close to their basket. Hein tipped the ball away from the Brahmans and drove hard to the basket. A jumper from Shook and Devine lead by 13. Devine led 18-6 at the end of the first.
The Brahmas started the second with the ball and after an easy rebound, the Brahmas sank and easy basket. The Arabians answered back with a basket from Hein after an inbound play. The Arabians found themselves in foul trouble about half way through the second with 8 fouls but the Brahmas had only 3. Up by only 10, the Coach Sessions called a time out to calm the Arabians down. A half court pass from Hein to Garza who passed to Romero for the basket and Devine was back up 22-12. The Brahmas pressed hard a half-court but the Arabians handled the pressure well with smart passes. Mackayla Schnautz put in two free-throws and with just a minute to go, the Denise Contreras was fouled and that put the Arabians in bonus. Making both of her free-throws Contreras helped wind down the clock and ended the half 28-15.
Brahmas scored first but then Hein swished a long jumper. Fouled driving in for a layup, Hein was fouled and after making both free-throws Devine, led 32-17. Shook took the ball all the way down court for an easy layup. Hein continued to dominate and with a smile she was making two more free-throws. Coach Sessions slowed the game down while the Arabians led 38-19. With under two minutes to go, the Arabians switch back and forth between their aggressive man-to-man defense and zone. Hein took the ball down court and then slide between multiple Brahmas for the basket and was fouled going up for another point. The Brahmas added another three-pointer and but were down by 13 at the end of the quarter.
Early in the 4th, Hein was knocked down hard and had to step out of the game for a moment and Contreras came in and inbounded the ball, the possession ended whenGarza drove into the basket for two. With Hein back in the game, the Arabians lost the ball but after fighting for the rebound, Garza threw the ball all the way down court to Romero for an easy basket and a 47-32 led. Slowing the game back down, the Arabians continued to out a lot of defensive pressure on the Brahmas. Another pass from Garza to Romero ended with another two points. Grabbing rebound, Gaza was fouled multiple times before the referees called a foul. Yeats put Devine up 51-37 after a basket. Getting her own rebound, Hein put the ball back up for two. After Garza fought two Brahmas to the ground over a jump ball, the crowds were not happy with the call and Coach Sessions worked on calming his team down. On defense, Hein and Schnautz tied up a Brahmas to put the possession back in Devine’s hands. After Garza put up a layup with an assist from Hein, Coach Sessions called a time out. Hein dribbled around and all over the Brahmas to waste time on the clock, King only stopped her with a foul. Up 55-41, the Arabians fouled a shooter and the Brahmas put up three points. Last few seconds of the game, King added their last two points of the game. The Arabians won 55-44!
“We played a really good game in the Regional Quarter Finals vs King. Defensively we did a great job of limiting their penetration. We were locked in and did a great job of knowing personnel. We did a great job of keeping a physical King team off the boards as well. Offensively we did a great job of being aggressive and attacking the basket. We got out in transition and we handled their pressure well. It was a great win for the girls and it advanced them to the Regional Semi-Finals in Kingsville,” said Coach Sessions.

On a cold Friday night, the Arabians traveled to TAMU Kingsville to face Boerne in the Regional Semi Finals. The Greyhounds were 9-1 and 1st in their district and 33-4 overall. To get to the semifinals, Boerne beat Cuero 50-31, Sweeny 74-28, and Navarro 57-37.
Starting for Devine was Liah Romero, Macey Hein, Yessika Garza, Kadence Yeats, and Mackayla Schnautz. 24 11 12 20 50
With Devine playing rough defense, Boerne found a hole for the first basket. Hein drove in for a basket but was fouled going up and put the first Devine point on the board. Hein found Yeats for a basket. Pulling out the defense, Hein made a hole for two. Boerne pulled back their full court press and played man-to-man at the top of the key. Yeats grabbed an airball at one end and then was going for a jump ball but was called for the foul. Boerne was up 14-5 and a time out was called to regroup the Arabians and both teams were scoreless the last minute.
Boerne added three after a basket and a free-throw to start the second. Hein stuffed a Greyhound while she attempted a three. A few minutes passed before Hein danced her way through four Greyhound to the basket and made her free-throw. A great pass from Yeats to Garza to be fouled shooting, Garza added a point to the board. The Greyhounds were called for a two back-to-back moving screen fouls and still got away with more. The rough quarter ended with Devine down 11-30.
With the Boerne led growing, the Arabians had to get more aggressive. Hein did just that, after the inbound pass came to her, she drove in for the layup. The Arabians continued to steal the ball and run their offense, but the ball would not sink into the basket. Hein had to push her way into the tall Greyhound for the layup and free-throw. Down 41-16 with a minute left in the third, Boerne continued to put pressure on the Arabians.
The fourth quarter was more of the same for the Arabians, tough defense and shots that would not sink. Hein drove in for a basket and the foul. Cece Romero stole the ball under the Arabian basket and passed to Contreras who was fouled. Making one of her baskets, the Arabians ran down court and their defense cause a turnover. Romero posted up and grabbed a rebound from the taller Greyhound. Fouled shooting, Romero both of her free-throws. Hien stuffed the Greyhound on the other end of the court. Continuing to play aggressively, the Arabians finished the game down 26-53 and end their season as the Regional Quarter-Final Champions!
“We did some really good things in the Regional Semi-Finals, however, we ran into a very good Boerne team. We struggled to make shots in the Boerne game. Their length really affected us and made us shoot some tough shots. We didn’t get the outcome we wanted but the girls did a great job of competing till the final buzzer. It was a great season! We finished 29-8 on the season and we won the district, bi-district, area, and regional quarter final championships.
I am so proud of the group of kids. They showed so much improvement through the year. That improvement was show on the court, but a lot of it was off the court as well. This is a great group of young ladies and I was privileged to coach them this season,” added Coach Sessions.
By Dicy Chambers
Sports Writer