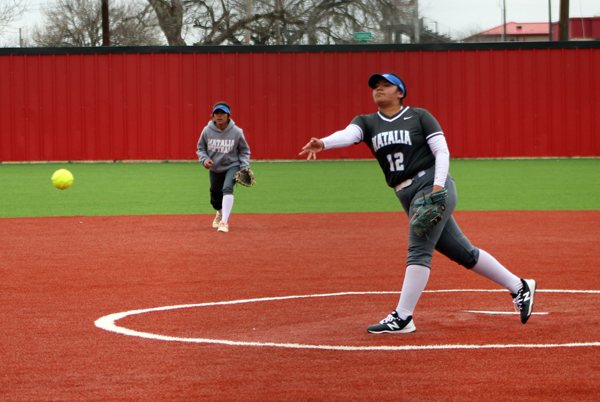 Natalia will host a small round-robin tournament this Thursday and Saturday at Lady Mustang Field. Natalia will be one of five teams to compete in the two day event.
Natalia opens the tournament on Thursday, March 3rd at 9:00 a.m. vs. the Devine Arabians. The 10:30 a.m. game will feature Poteet and Uvalde as Natalia is back in action at 12:00 p.m. vs the Cole Lady Cougars. Poteet and Devine will battle at 1:30 p.m. and Cole battles Uvalde in the final game of the day at 3:00 p.m.
Saturday, tourney play resumes at 9:00 a.m. as Uvalde battles Natalia. Poteet and Cole square off at 10:30 a.m. as Uvalde and Devine battle at 12:00 noon. Poteet and Natalia square off again at 1:30 P.M. as Devine and Cole round out the tourney at 3:00 p.m.
Tickets are available on ticketspicket.
Natalia Softball battles in competitive week
The Natalia Lady Mustang Softball team continued their non-district battles as they battled Charlotte in a home contest prior to two days of games in Jourdanton. Natalia was able to finish the week with two wins, two losses and one tie and they will take a 4-6-1 record into another week of play.
Charlotte
A talented 2A squad from Atascosa County came to town last Tuesday, February 22nd to face Natalia. After watching Charlotte strike in their first at bat thanks to a double and a single, Natalia returned the favor with a run of their own. Natalia rallied in the bottom of the 1st with two outs, as Taty Alvarado was able to get n courtesy of a walk, before watching Marina Billalobos put an RBI single into play to tie the game early.
In the 3rd inning, Charlotte used a couple of errors combined with a pair of singles to score in two runs to take a 3-1 lead vs the girls in blue.
Natalia responded with two runs of their own in the bottom of the 3rd.The runs came courtesy of a single by Kira Jimenez and Sky Gallegos and a big triple by Taty Alvarado to score in two.
Charlotte scored four big runs in the top of the 5th to take control thanks to a pair of home-runs, as they would out-last Natalia when all was said and done by a score of 9-7.
Charlotte finished the game with 15 hits as Natalia finished with seven hits. Of the nine runs scored by Charlotte, seven were earned. Natalia earned five of the seven runs scored.
Alvarado led the offense with three hits, as Jimenez had two with Gallegos and Billalobos accounting for the remaining action.
Billalobos finished with 5Ks and walked two.

Jourdanton Tournament
Bryan Rudder
5A Bryan Rudder was the first battle for Natalia on a frigid Thursday afternoon Coached by former Pleasanton stand-out Torey Dumont. Natalia had their chances against Rudder, but a few miscues along with three stranded runners resulted in a 2-0 loss by Natalia.
Billalobos held Rudder to five hits, allowed two runs and struck out two in the game.
S.A. Brackenridge
Natalia’s offense came alive in their second game of the tourney vs the Lady Eagles of Brackenridge. Natalia jumped on the SA squad in their opening at bat scoring eight runs, en route to a big 14-0 victory. Natalia out-hit the downtown squad 6-0 and forced an additional four errors on their defense.
Yahdi Lujan and Alvarado led the offense with four hits each, as Jimenez, Billalobos added one each.
Billalobos held Brack without a hit or a run and struck out two in the game with one walk.
Devine
Natalia returned to action Friday vs neighboring Devine. Natalia started off the game big, as they scored three runs thanks to a Jimenez base on balls, a Gallegos double and an Alvarado single along with a few ground outs.
Devine scored a run of their own in the bottom of the 1st thanks to a triple and a ground out.
Natalia added another run in the top of the 2nd inning, thanks to an error put into play by Anaya Jones and a Gallegos single to take a 4-1 lead. Devine came alive in the bottom of the 2nd using one error, two singles and a double to score two runs cutting the lead to 4-3.
Natalia scored their final runs in the top of the 3rd. Natalia used a Billalobos single, a walk by Lujan and a single by Jones to take a 6-3 lead that would last.
Natalia and Devine finished with five hits each, as both teams had two defensive errors.
Gallegos led the offense with two hits, as Alvarado, Billalobos and Jones pitched in.
Billalobos finished the game allowing five hits, three runs, one of which was earned with four Ks and one walk.
Poteet
Natalia’s final game was vs. the Poteet Lady Aggies. Natalia and Poteet finished the game in a 4-4 tie when all was said and done in the timed event. Natalia was out-hit 5-1, but two defensive errors on the Poteet defense aided Natalia’s scoring. Natalia’s Jimenez was the lone Lady Mustang to hit in the short 3-inning contest.
Billalobos finished the game allowing five hits, four runs, three of which were earned with 4 Ks and three walks.
Saturday’s competition was canceled due to weather.
Upcoming Games
Natalia was on the road on press night battling the Hondo Owls. This weekend, Natalia will host a home softball tournament. See the softball tourney story for further details.
Tuesday, March 8th Natalia opens 27-3A action on the road vs. the Jourdanton Squaws.
By Eric Smith
Staff Writer