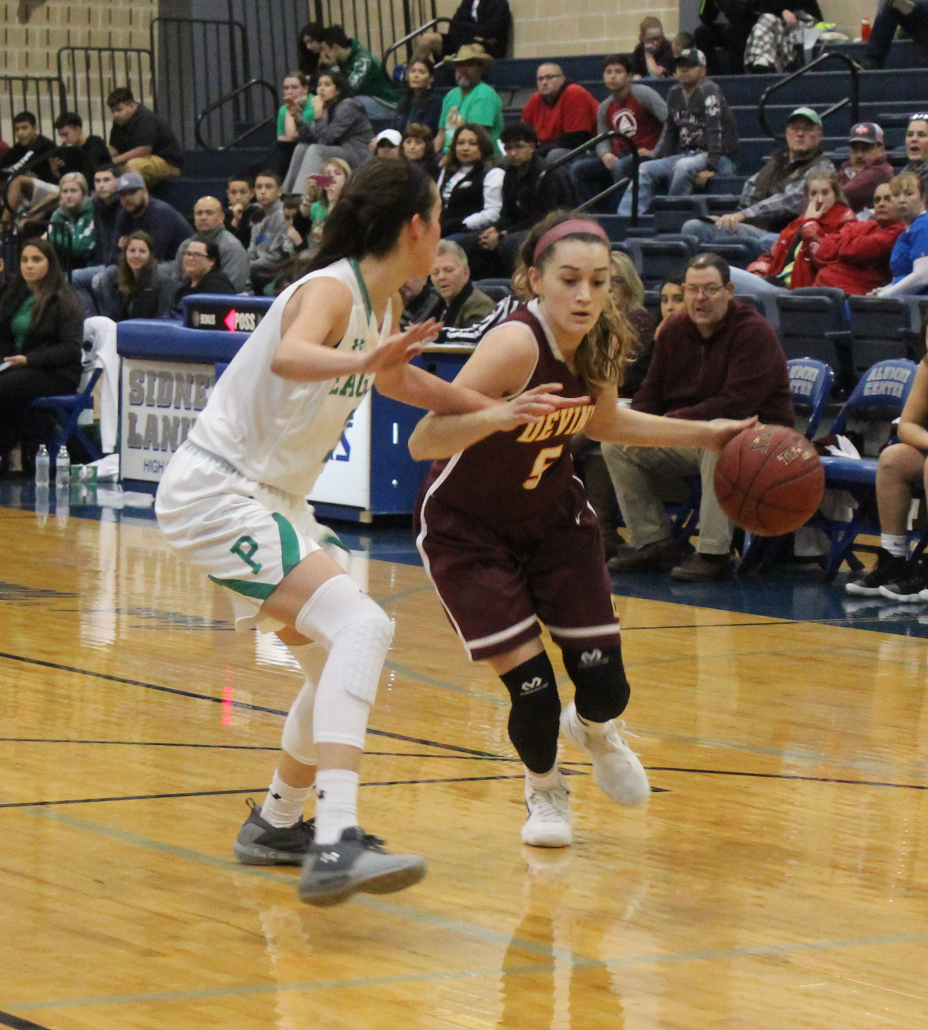 Facing the Pleasanton Eagles for the Bi-District game last Tuesday, February 13th, the Arabians played an amazing game but lost 40-42 after some late game 3 pointers from Pleasanton senior #25 Breanna Hinojosa. Coach Jim Sessions brought a full line up with 14 players, bringing up some from the Junior Varsity. Three seniors, five juniors, four sophomores, and two freshmen faced off against the Eagles.
It starting off excited in the first few minutes with a couple turnovers, and Pleasanton getting the first basket. The Arabians quickly settled into their pace and ended the first half up 10-9. The Eagles got into foul trouble in the second quarter and the Arabians were able to add to the score board off of some one and one free throws, making four of six free throws in the second quarter. At the end of the half, Devine led 22-13.
In the third quarter, the Arabians kept playing with everything they had but couldn’t get their baskets to sink. Pleasanton was able to catch up a little this quarter outscoring Devine 8-6 and ended the quarter 28-21. In the last quarter after a questionable back court call against Devine, Pleasanton gained some momentum and took the lead when #30 Loryn Hardy sank a 3 pointer. Down one point, a jump ball gives the Arabians the ball under their basket but a foul against Devine is called giving Pleasanton one and one free throws. Time ran out with a final score of 40-42.
Devine played a great game with Preslee Quisenberry driving the basket, scoring 12 points, and Lily Stricker being a rebounding machine under both baskets and scoring 11 points. Sierra Pompa scored 6 points, Chesney Friesenhahn 5, Alissa Stehle 4, Megan Runyan 2 points, and also playing was Abby Whitaker, Saily Zetino-Sanchez, Clarissa Zamora, Maddie Mata, Kaylee Howard and Jasmine Pompa.
Playing for Pleasanton was #1 Baylee Bauer 2 points, #3 Aubrey Guerra (Senior) 17 points, #5 Santana Huron (Sr.) 9 points, #10 Messiah San Miguel, #12 Calli Jones, #15 Kalyssa Rios, #20 Rachel Black (Sr.) #12 Kathleen Valadez 2 points, #25 Breanna Hinojosa (Sr. ) 6 points, #30 Loryn Hardy (Sr.) 2 points, #33 Heaven Marquez, #40 Brianna Garcia, and #45 Harper Brymer 3 points.
“The bi-district loss doesn’t take away from the outstanding season the girls put together this season. We won 27 games and we earned an undefeated district 29-4A title. We placed in all of our tournaments and we really grew as a group during this season. I was very pleased with what this team accomplished this season and I was very proud of the resilience they showed during the difficulties of the season. They competed well and gave their all every night and that is what we are really trying to achieve. Very pleased with the season,” said Coach Jim Sessions.
Pleasanton played Aransas Pass on February 16th and lost 31-36. Aransas Pass will play Jones High School next for the Regional Quarterfinals.
By Dicy Chambers
Sports Writer