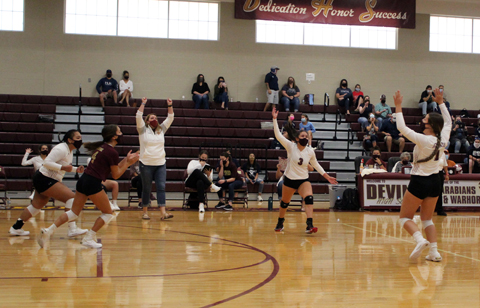 Now 7-7 for the season, the Varsity Arabians had a tough week last week as they faced Navarro and Hondo. With district starting on September 22nd, the Arabians still have a week to work on their game and get ready to make a comeback.
When they Played Navarro on September 8th, Coach Leigh Anne McIver said, “As a team we just had one of those nights where everyone was off and we just could not get anything going our way.”
Kills: Megan Runyan 4, Rylee Esquibel 5, Madison Pike 3. Aces: Esquibel 1. Digs: Allison Stevens 1, Runyan 3, Esquibel 1, Kristina Moralez 9, Bailey Oropeza 3, Pike 1. Assists: Stevens 4.
When they traveled to Hondo on Friday night, they knew they were in for a challenging game.
“I thought we played better tonight then we have been, but we just made too many unforced errors to keep us in the game. We were a lot more aggressive on offense but just couldn’t get consistent passes on serve receive and defense. Once we get those two things down and put a whole game together, we will be good and hard to beat. Just trying to fine tune some things that usually get taken care of during tournament season,” Coach McIver said.
Kills: Runyan 12, Esquibel 11, Oropeza 2, Aleyna Gerlach 2, Pike 10. Aces: Runayn 2, Moralez 2, Oropeza 1, Lacey Shook 2. Blocks: Esquibel 1, Oropeza 1, Pike 2. Digs: Stevens 5, Runyan 10, Esquibel 1, Moralez 11, Oropeza 3, Shook 1. Assists: Stevens 13, Runyan 1, Esquibel 15, Moralez 1.
The Arabians will face Fredericksburg this Friday night at home and then open district in Somerset September 22nd.
By Dicy Chambers
Sports Writer