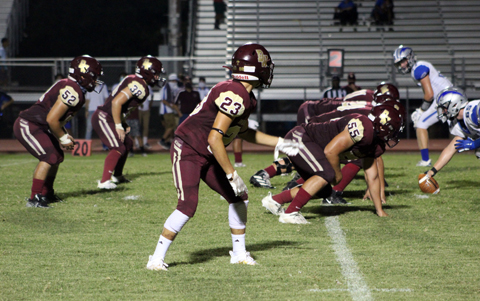 Friend or Foe
Devine met up with a Randolph team that it has not played since the 1986 football season. The Warhorses won this past Friday 34-20 and they won the previous meeting 20-9 to now lead the all-time series 4-1-1.
With the Warhorse and Ro-Hawk teams, players, and coaches unfamiliar with each other and each not really a history, good or bad, of the two schools to remotely call it a rivalry, maybe this matchup will have the two facing off again in the near future.
Since the Warhorses did win, however, we will consider the Ro-Hawks our ‘friends’…for now
Stat mongers
Three players have steadily wrecked the stat lines as we approach the fourth game of the season. As a team, the Horses have already cruised by the 1,000-yard rushing mark for the season. At 1,068 yards on 143 attempts, Devine is averaging 7.47 yards per carry.
Leading the ground game is senior Buddy Santos. Buddy has 61 carries for 398 yards (6.52) and 7 touchdowns. He has also caught a scoring pass from the second leading Warhorse rusher who is…
Brady Hackebeil. The junior quarterback has carried the ball 42 times for 374 yards (8.9) and 3 touchdowns. Brady has also thrown for three scores. One went to Buddy, while the other went to Devine’s leading receiver who is…
Mason Burford. Mason has caught eight balls on the year for 86 yards, which is just at 11 yards per catch. Last week against Uvalde, Mason had two clutch receptions that resulted in Warhorse touchdowns. As it wound up, Devine needed both of those TDs to clinch their 49-48 victory.
On the first, he caught the ball in traffic just inside the left front pylon of the end zone to close the Coyote lead to a single score with 0:02 seconds left in the first half. His second came with 5:23 left in the ballgame on an over the shoulder grab while dragging his right foot in the back of the end zone. That unbelievable pass and reception gave the Horses a lead they would not relinquish.
Between Santos, Hackebeil, and Burford, those players have scored all of Devine’s 13 touchdowns and have accounted for 898 of the Horses 1,206 total yards. That is good for about 75% of Devine’s total offense.
That’s rank
Devine kept its grip on the #8 spot in the weekly SA Express-News football rankings. Boerne remains the top dog in sub-5A followed by Poth, La Vernia, Navarro, Fredericksburg, Comfort, and Jourdanton. Devine comes in next with Cornerstone and Hondo being #9 and #10 respectively.
Enjoy the ride
Winning should not be taking for granted. It is a proven fact that every result from a high school football game will have 50% of the players and coaches leaving victorious while the other 50% walk off the field wondering what could have been.
Devine has been spoiled in a good way over the last 25 years or so, stacking up numerous district championships and several other championships along the way.
This victory deserves its own celebratory time, just as every other victory the Horses have already had this season, or the victories that lie in wait.
“I told the boys to enjoy that win this weekend but starting Monday, we have to put that behind us and put our heads down and get to work. We know that if we practice with great energy and focus that we play better on Friday. Excited to get to work on Monday and keep climbing that ladder.”
Celebrate good times, come on!
Kool & The Gang had it right with their song Celebration back in 1980. The idea of the song translates easily into the previous section’s theme “Enjoy the ride.”
Kool and his gang sang the following for you young whippersnappers that do not know what real music is all about…
There’s a party goin’ on right here
A celebration to last throughout the years
So bring your good times, and your laughter too
We gonna celebrate your party with you
Think of the “party” being a Warhorse football game and think of the “celebration” the players and Warhorse Nation should do after a Friday night victory. Keep the good times going in the stands, and keep the energy positive and festive. Then, celebrate just as the players should because that victorious moment is worthy of celebration.
Playing football is tough, it is demanding. For players, coaches, and even Warhorse Nation fans to not celebrate after a win is to not recognize the hard work and dedication the team put in to achieving victory.
Keep it Kool, Gang!
By Jerel Beaty
Staff Writer