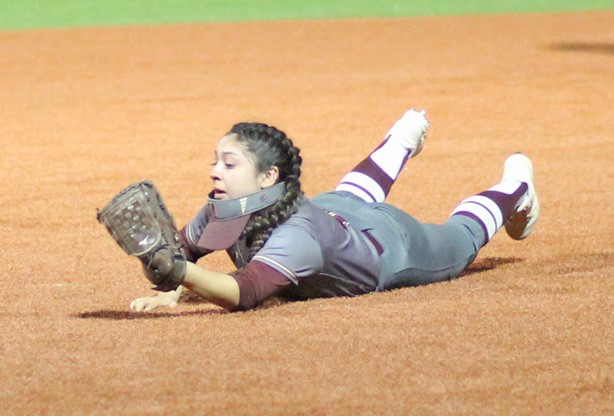 With no runs on the board until the bottom of the fifth, Cornerstone was able to squeak by with a win over the Arabians. Devine scored three runs in the top of the sixth and Cornerstone scored one more that inning that was unanswered by Devine in the top of the seventh and they lost 3-4.
Devine’s scoring play: Top of the sixth with Jessie Ramirez on third and Mackenzie McClellen on first, Allison Taylor hit a strong triple to left and Ramirez and McClellen scored. Mackenzie Schneider ground out to second and Taylor scores to tie the game at three.
Ramirez 1 run. McClellen 1 run, Taylor 1 run, 2 hits, 2 RBIs. Schneider 1 RBI. Pitchers McClellen threw 45 strikes in 63 pitches and Isabella Gutierrez threw 15 strikes in 28 pitches.
“The positive that we can take from the game is the fact that the girls competed hard for 7 innings. Our main focus going into district play will be to limit walks and to make the routine plays on defense. Our hitting has been a little quiet lately, but I have a feeling they will show up and make some noise on Tuesday vs. Hondo,” said Coach Juan Gonzalez.
The Arabians played their first district game last night in Hondo. They will face Carrizo Springs at home next Tuesday and then in Crystal City Friday, March 22nd.
By Dicy Chambers
Sports Writer