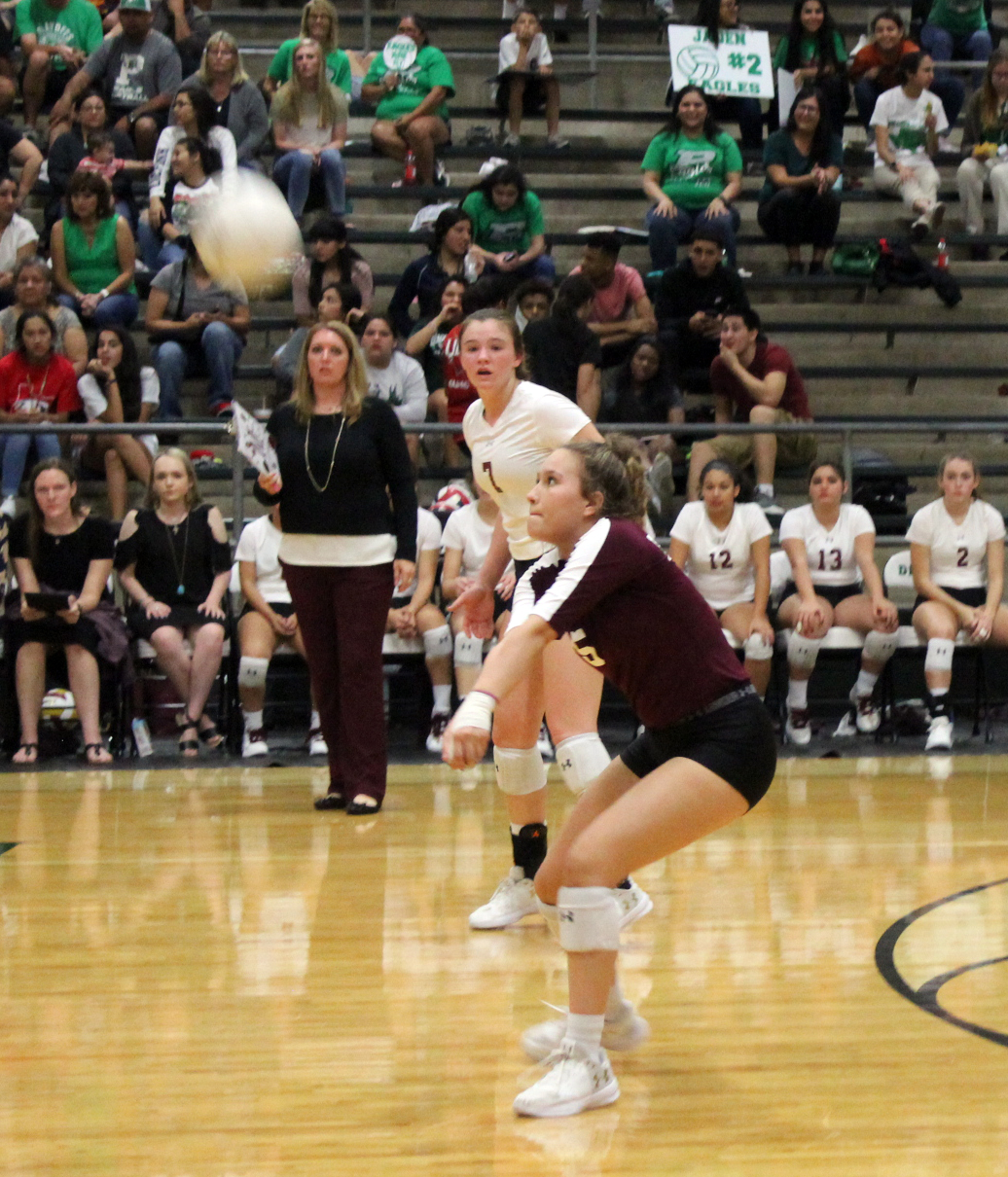 The Arabians fought hard against a talented Needville team in the Regional Semifinals this past Friday, November 10, but Needville’s big blocking game hindered a talented Arabian offense that can proudly say they swept most other teams off their feet this season. Needville went on to defeat Navarro to take the Regional Championship the following day.
The Arabians had an outstanding season and have many accomplishments to be proud of this season, including the great heart and hustle in that Regional Semi-final match.
Makenna Morales, Addie Trojanowski, Chesney Friesenhahn, and Amanda Richardson all hit the floor to make many great saving digs keeping the ball in play while a powerful offense pounded away. Though Needville put up a tough big block, they couldn’t stop the Arabian offense completely. On great sets by Sydney Rendon and Trojanowski, Friesenhahn, Pompa, Stehle, and Fowler all snuck in a few kills in the game. Needville took game one 25-14.
Friesenhahn came up against Needville with a vengeance in game 2, for one of the best kills of the night as they lead Needville 4-3. Dana Aaron and Trojanowski put up a nice big block to stop one of Needville’s attempts soon after, but they just kept coming back at us. Needville took the second game 25-14.
Richardson had a great dig at the beginning of the third game and Pompa and Friesenhahn each laid a few kills to take an early 6-4 lead over Needville. After catching up to us, Pompa and Friesenhahn made two great blocks on a long volley that tied the game up 14-14. The two talented teams were neck and neck for several plays tying the game several times on Pompa kills at 16-16, and 17-17, and a Trojanowski kill at 18-18. Trojanowski sent two nice serves over that Needville couldn’t return, tying it up again at 22-22, but Needville blockers prevailed in the last few plays of the game, beating us 25-22 in game 3, winning the match.
“I thought the girls did a great job on defense and serve receive tonight,” Coach Leigh Anne McIver said. “We just had a hard time hitting around their block.”
Offensively, the Arabians had 4 aces; Trojanowski 3 and Morales 1. There were 28 kills; Pompa and Friesenhahn 10, Trojanowski 6, and Aaron 2. The Arabians also had 26 assists; Trojanowski 17, Rendon 5, Morales 3, and Friesenhahn 1.
Defensively there was one block made by Pompa, however they were able to get 70 digs; Morales 20, Richardson 15, Friesenhahn 12, Trojanowski 7, Pompa 6, Rendon and Stehle 4 each, and Aaron 2.
“It makes a difference when the other team has 5 to 6 inches on us,” Coach McIver said. “I am very proud of the team and what they accomplished this year.”
“It was an unforgettable season and team,” Coach McIver said. “These girls are the tightest group of players I have coached in a while and that was evident on and off the court.”