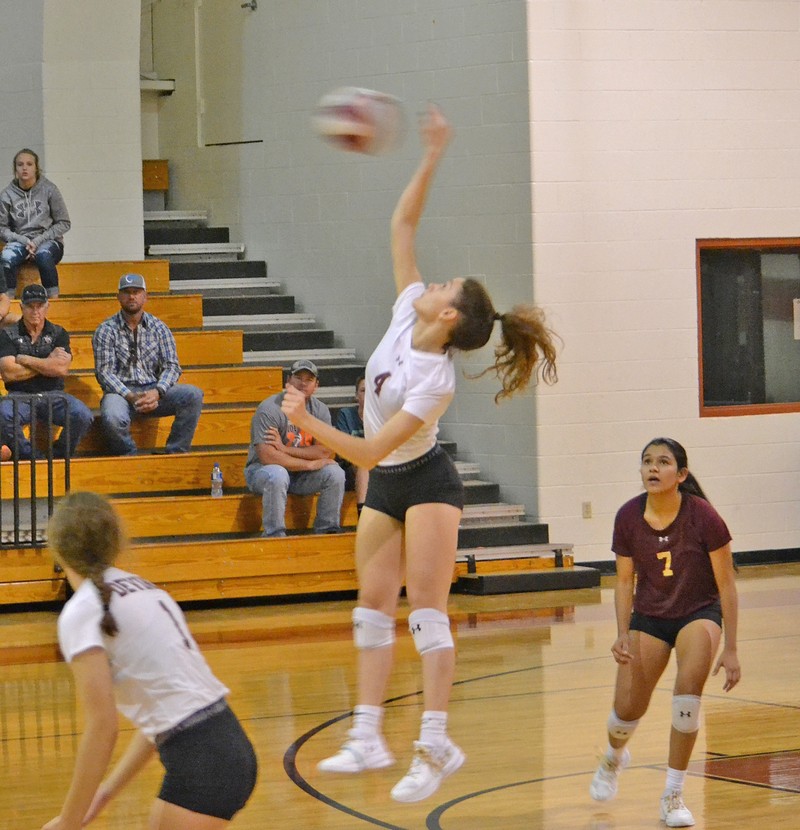 During the first match, the Arabians got to a 10-6 lead off blocks and spikes but a questionable line call gave the Lady Gobblers some momentum to go on a run and take the lead. At 12-13, Sierra Pompa had a huge back row spike to tie the game back up. Cuero would continue to take the lead and Devine would tie it back up until Pompa spiked the ball into a Cuero hole for the leading point. The line referee made a great call in favor of Devine to make the score 22-20 but Cuero retaliated with a kill into a Devine opening for a point. Devine would score two more points before the Cuero coach called for a time out at 24-21. After Devine’s final serve, Pompa would spike a set from Macey Hein into the Cuero blocker to win the set.
Set two did not start off as well for the Arabians and they fell to a 9-15 hole. Several mistakes from Cuero’s offense and a couple kills and blocks from Devine and the Arabians had the game back up 21-21. Cuero would send the ball out of bounds on a spike and their coach called time 22-21. Pompa would add another kill to their score but Cuero would return with a kill of their own 23-23. Cuero’s next serve would give Devine the ball and the advantage back. On the last play of the set, Pompa would again spike the ball into a Cuero opening to end the set 25-23.
The only time Cuero would have the lead in set three is in the first couple of plays. Devine would tie the game 2-2 and then hold the lead the rest of the game. When the score was 5-3 Gabby Rodriguez dug out a spiked ball that rattled Cuero causing them to end the point with the ball in the net, 14-7. Alissa Stehle killed the ball into a Cuero player that could not move fast enough to recover it. Cuero attempted a comeback and was able to get the score to 18-16 but their rally ended then, 21-17. Cuero called time after Hein dinked a ball over the net right between two Gobblers. Devine’s front row was able to block a dinked set and get the ball back over the net into unprepared Cuero 24-19. The last point of the game came when Cuero could not get the ball back over during a volley.
Sara Moreno scored the only ace of the night and had 1 assist and 8 digs. Sierra Pompa finished sets 1 and 2 off with a kill, she had 20 kills, 3 blocks, and 17 digs. Macey Hein had 26 assists as setter, 4 kills, and 8 digs. Dana Aaron had 1 kill, 1 block, and 5 digs. Alissa Stehle had 10 kills, 3 assists, and 13 digs. Kaylee Howard had 3 digs. Gabby Rodriguez controlled the backcourt with 20 digs. Megan Runyan had 3 kills, 1 block, and 2 digs. Madison Pike had 3 blocks, 2 digs, and 1 assist. Jasmine Pompa, Clarissa Zamora, Myla Miles, and Sydnie Harrell supported their team from the sideline.
By Dicy Chambers
Sports Writer