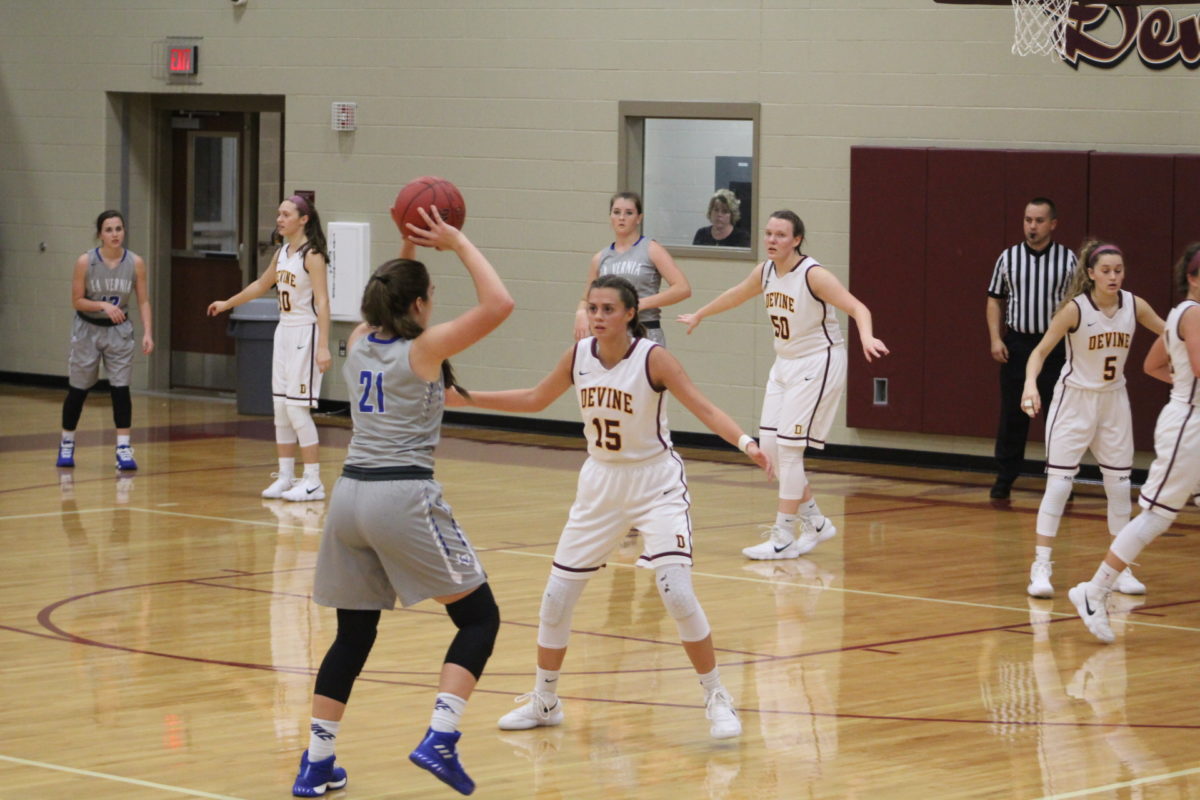 This week the Arabians faced Bandera last Tuesday, November 28th. A strong defense allowed the Varsity team to keep Bandera from scoring and help them win the game. A final score of 40-28, the Arabians are “working hard to get better daily and it is starting to show in their performance.” Coach Jim Sessions
Lily Striker lead the points with 12, Abbie Whitaker had 10, Alissa Stehle and Chesney Friesenhahn each had 7, Maddie Mata 6, Sierra Pompa 4, Preslee Quisenbery, Saily Zetino and Megan Runyan each had 2.
At the Marion tournament on November 30 through December 2, the Arabians opened against Falls City and the aggressive quick team gave them a tough game. The score was tight the whole game but the Arabians were fighting till the end. With just a few seconds left and down by 2 points Quisenberry passed to Whitaker for the game winning lay-up.
Quisenbery had 20 points, Whitaker had 17, Friesenhahn, Mata and Stricker each had 4 and Stehle had 2.
Facing Boerne for their next game of the tournament the Arabians had their only loss. Showing improvement since the last time they faced each other, Boerne was able to get a lead on Devine that just could not be closed. The final score was 51-43.
Not letting one defeat get them down, the Arabians beat Marion in another very close game. Trailing until the 4th, Marion kept taking the lead until a game winning shot was made by Quisenberry. Winning by only that shot the Arabians proved that even from behind they would never give up. Quisenberry had 11 points, Pompa had 10, Whitaker 6, Friesenhahn 4, Clarissa Zamora 3, and Stehle and Stricker each had 2.
In the final game of the tournament Gonzales fell hard to the Varsity. With a final score of 50-24, the Arabians were able to press hard on the defense and transition to offense to score. Gonzales tried to keep the Arabians from scoring with a zone defense but quick ball movements allowed them to open the zone and put points on the board.
Quisenberry scored 11 points in this match while Striker had 10, Pompa 6, Whitaker, Friesenhahn, Mata, and Zamora each had 4, Runyan 3 and Stehle 2.
Winning 3 of the 4 games put the Varsity Arabians in 2nd place. They are building and using their strong defense. “I am proud of what this group is doing and I look forward to what the remainder of the season holds for us,” said Coach Sessions.
Two Arabians Named All Tournament
During the Marion Tournament, Preslee Quisenberry and Abigail Whitaker were named to the All-Tournament team. Quisenberry is a junior and over the four games she scored 66 points. Quisenberry helped win the Gonzales game with a shot in the last moments. In her senior year, Whitaker won the Falls City game with a strong layup with two seconds left. Whitaker had 35 points over the four games.
This weekend the Arabians host their Varsity tournament. Their overall season record is 8-5.