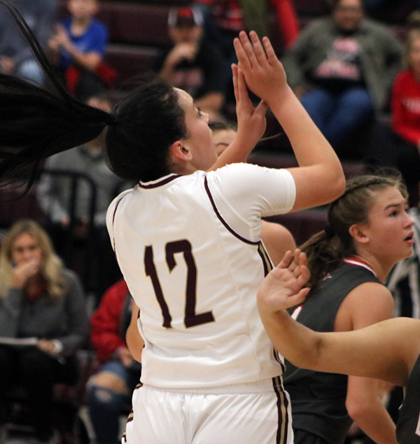 Now 16-6 after the first half of the season, the Arabians are in a great spot heading into district soon. Their last two non-district games will be against Pearsall December 28th and in Crystal City on December 30th. The Arabians will face Brooks Academy on January 7th. “The girls finished the 1st part of the season playing a lot of games. We’ve learned a lot during that time, but we have more to prepare for after the break. As of now, our record is 16-6. We are looking forward to some much-needed rest and down time during the Christmas break,” added Coach Jim Sessions.
Devine faced Fredericksburg on December 21st, and after getting off to a slow start, the Arabians “settled in, got some stops defensively and then made some shots, and fought our way back into the game to lead after the first quarter. We played hard on the defensive end of the floor and that kept us in the game. We actually did a good job of forcing turnovers vs Fredericksburg. However, we struggled taking care of the ball at times and that hurt us in this game. We had stretches where Fred’s defense capitalized on us not taking care of the ball and they scored in quick bunches. For the most part, we were able to overcome this during the game but it really caught up with us late in the game. Fatigue set in and we really struggled in the last half of the 4th quarter. That is when Fredericksburg really pulled away. In all, the effort was really good. The fought hard but came up short,” said Coach Sessions.
Lacey Shook 3 rebounds, 4 assists, 1 steal. Macey Hein 27 points, 6 rebounds, 2 assists, 2 steals. Kendall Marek 2 rebounds, 2 steals. Yessika Garza 8 points, 11 rebounds, 1 assists, 4 steals. Kadence Yeats 4 points, 1 rebound, 1 steal. Denise Contreras 5 points, 1 assist, 1 steal, 1 charge. Liah Romero 2 points, 1 assist. Q1 11-9, Q2 23-25, Q3 41-44, Q4 49-65. FTP 60%.
By Dicy Chambers
Sports Writer