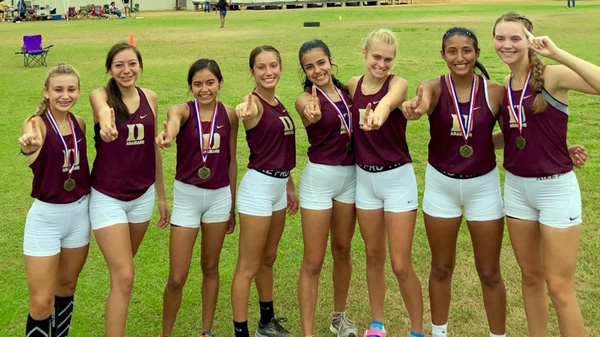 Pearsall meet
Two meets, two championship plaques. The veteran-laden Devine Arabian Cross Country team has opened its 2019 season with back-to-back team championships. The Arabians won their home invitational on August 21 then claimed the top prize last Saturday in Pearsall.
Brianna Bowyer led Devine once again running a 14-minute flat 2-mile to take the third place individual medal. Yessika Garza was not too far behind finishing 5th overall with a time of 14:10 and Brooke Runyan was 6th posting a 14:11.
Espi Mendoza (9th/14:27) and Audrey Longoria (12th/14:40) accounted for the Arabian’s 35 team point-total. Kelli Geyer (16th/14:53), Kristina Morales (17th/14:56), and Brianna Bernal (20th/15:17) completed the individual totals.
Devine’s 35-point performance topped second place Crystal City (77) and third place Pearsall (89).
She said it
“Going into our first two meets really set the pace for the team this season. We were shown how to run together which led us to win both meets.”—Brianna Bowyer
“The first races were a reminder of my pace and rhythm that I have lost since the end of last Cross Country season. I enjoyed getting back to a competitive feel of racing and using my teammates as a reminder to keep going no matter how much I want to give up.”—Brooke Runyan
Up next
All of Devine’s Cross Country teams have Labor Day Weekend off before resuming their season at Hondo on Saturday, September 7. A complete schedule for that date will be in next week’s Devine News.
By Jerel Beaty
Staff Writer