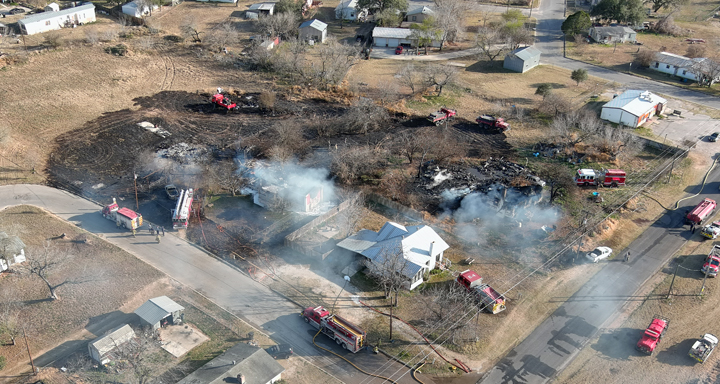 It was a heartbreaking scene this Sunday as homes burned in a large fire, fueled by extremely windy conditions in a densely populated area. Over 40 volunteer firefighters, a rehab team with refreshments, and other personnel from Devine, Natalia, Moore, Bigfoot, Hondo, Castroville and Lytle fire departments rushed to the scene to help. Crews spent hours and hours helping at the fire along Transportation Drive, but it was a tough fire to fight as the winds fueled it. Emergency responders were toned out around 3:15 p.m. Sunday afternoon, March 13, 2022. Some of these volunteer firefighters stayed on scene all afternoon and all night, 18 HOURS, putting out flare ups and watching over the neighborhood until 9:00 a.m. Monday morning.
“This was a wind-driven fire, and we did lose two homes. Within about 2 minutes, it went from 1 acre to 2 acres with the wind. The fire was moving so rapidly,” said Devine VFD Fire Chief Greg Atkinson. “It all started by someone burning trash in a barrel. It is too dangerous in these dry conditions and high winds to burn outside, even in barrels. Now there are several people who no longer have a home.”
According to Devine PD, a joint investigation with Bexar County Fire Marshall’s Office indicate possible Reckless Arson charges, pending review by the District Attorney at this time.
Lieutenant Chris Andrews stated, “It would have been even more horrific if it wasn’t for all of the area fire departments and thier volunteers, with lots of dry grass leading to many more homes surrounding the fire. Firefighters came out in full force and did an absolutely awesome job. Fortunately, no one needed EMS transport. Twelve pets were saved from the fire, while it is believed that 6 others unfortunately didn’t make it.”
Devine VFD Chief Atkinson added, “Just about every department was there for 7 hours or so, and we staged there, throughout the night to make sure we didn’t have any flare ups get out of control. One home was a collapse risk, so without being able to get in there, we wanted to continue monitoring it.”
Firefighters Bill Lay, Randy Schott, Scott Delucia, Raquel Seaton, and Chief Greg Atkinson were out there for about 18 hours, knocking down flare-ups at midnight, and a few more in the early morning hours until leaving around 9 am.
“The heat on the exterior of that house on one end was well over 1500 degrees, blowing at us, and the heat coming off the trailer house on the other side was around 1000 degrees. Wind gusts were up to 20 MPH, and when you combine that with the wind tunnel that the fire receives, it was closer to 40MPH winds that we were fighting, with that hot water and smoke blowing back at us. We knew we couldn’t save those two homes, but we were able to save the home in between, and keep it from spreading to others,” Atkinson said.
There were another 12-15 homes not too far away, which could have easily become involved with a gust of wind their direction, so the community is very grateful that crews were able to contain the fire, especially under the tough conditions.
“The height of the embers was also a big concern from the beginning, and that is the reason we created what we call a wall of water at first, until we could get hand lines in closer to attack the fire,” Atkinson said.
“With the weight of our trucks, we knew if we drove it off the hard top, to get where we needed to be, we might get stuck. At that point, I said well if that truck sinks, we fight from the truck until we can’t anymore. We drew a line in the sand and our guys did what they had to do. We try to never fight the fire against the wind. Yesterday, we had no other choice but to put somebody directly in the path of the wind…you just have to stand your ground until you can’t.”

The fire was anywhere from 100 yards to 30 yards from the hydrant with fences and houses, vehicles, trees and materials all making it very difficult to penetrate a good offensive or defensive attack.
“One of our volunteers, Assistant Fire Chief Patrick DuBose, played a huge role in this, with his experience. Around 5 pm, his reset was spot on, in helping us to reposition, reassess, and regain control of this scene, after the initial knockdown,” Chief Atkinson said.
Some things to know, when it comes to accessibility for fire trucks in an emergency:
-At least a 16-20 ft road clearance is needed, so fire truck crews can hook to hydrants and other trucks can get by them for further suppression.
-Hoses will spray 25-50 feet at 100 lbs of pressure depending on the nozzle and nozzle setting.
-It generally takes at least 2 ff’s because it’s heavy pressure to maintain control of.
-The water cannon can spray 100ft with 100lbs of pressure. However, they can only use the water cannon when supplied via hydrant because it would use the entire tank water very fast.
Thank YOU to the HEROES from area volunteer fire departments and others who came to the community’s aide this past Sunday and everyday:
Devine VFD volunteers: Scott DeLucia, Randy Schott, Eugene Rodriguez, Raquel Seaton, Shelly Watson, Clint Watson, David Ehlinger, Austin Ehlinger, Daniel Ehlinger, Patrick DuBose, Greg Atkinson, Bill Lay, and Kenny Kuykendall.
Devine VFD’s Rehab Team: NaKita Atkinson, Michelle Griggs, Dither Moreno, Scott Calame, Mike Berrara, and Henry Salas.
Moore VFD sent 5 trucks and personnel including: Chief J.D. Earls, Captain Chuck Compton, Captain Stephanie Earls, Lt. David Croft, Lt. Michael Saldana, FF Mario Gonzales, and FF Juan Davila.
Also responding were crews from Bigfoot VFD: Barry Jetton, Bobby Grubb, Pate McCormick, Dennis Woody, Garrett Fritz, Denise Woody.
From Natalia VFD FF’s Saul Castellenos, Greg Cargile, Cory Bradley, and Alex Rodriguez.
From Castroville Fire: Lucas Lopez and Al Niebruegge.
From Hondo Fire Dept: Captain Pete Hernandez, Lt Jonny Barrientes, FF Vanessa Barrientes, Vance Salazar, Sergio Rosales, and Gaylon Schueling.
From Lytle Fire Dpt. Logan Medina and Jacob Garcia.
Volunteer today!
”We are all Devine. Whatever is on fire it is our home, our field, our crop, and we try to treat it as if it was our own. We have a lot of 19 and 20 year olds and 50 and 60 year olds and every one of them was out there for 9 to 10 hours minimum and some of them for all 18 hours,” Chief Atkinson said.
“Today we are inundated with messages from the community calling our guys heroes. But we are just teachers, we are plumbers, we are AC technicians, fence builders, truck drivers, counselors, farmers and ranchers! Our volunteers are just people like everyone else, who on a moment’s notice, takes that hat off and puts on their fire helmet. Anyone who is willing to help, can be part of our team.”
Devine VFD meets every Monday and Thursday at 7 o clock. If you wish to make a donation or join their rehab team, you can drop off items like Gatorade, paper towels and paper goods, water, etc.
By Kayleen Holder
Editor