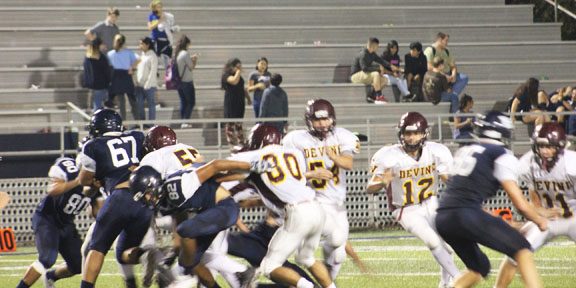 There was a lot of mojo working against the JV Warhorses this past week.

With Devine moving all juniors up to varsity for the Friday night game, it was up to the freshman and sophomores to take on a junior-laden JV Owl squad. Although the results were understandable, the Warhorses put up a heck of a fight before going down 6 to 39.
The team had a lot working against it this week, obviously. With all of the rain forcing the team to practice inside all three days leading up to the game, the coaches pieced two teams into one and tried to get players in the right position to be successful. That is a monumental task on its own, much less without the opportunity to get onto an actual playing field to work on timing and nuances of the game.
According to Coach Scott Taylor, “With the juniors moved to help an injury depleted varsity, the group that took the field in Hondo played hard against an older, more experienced Hondo JV. We struggled to hold onto the ball giving up four fumbles. We also had some special team breakdowns due to the combining of two teams. The kids are continuing to work hard and we are showing improvement weekly.”
The only score of the game for Devine came on a 6-yard run by Sergio Martinez in the 2nd quarter. That score closed the gap to 6-14 going into halftime.
The freshman and JV teams will be off this week before starting district play on October 12.
Jerel Beaty
Staff Writer