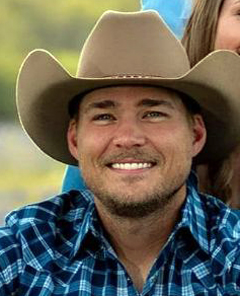 Patrick Rohde, of Devine, has just undergone major emergency surgery, and is in need of many more. Fortunately friends have come to the aid to help with a benefit and steer Rohde to doctors in the right direction.
“It was a God Wink”, said his mother Donna Rohde in a interview Tuesday afternoon. “One of his high school classmates Jed Hummel saw his story and called his sister Lacey Hummel who is a nurse and recently married to a urologist Eddie Morales. Lacey and Eddie called Patrick and talked to him the day he was released from the New Braunfels hospital and realized he needed immediate care. We drove him to Del Rio and Eddie did surgery on him the next day. Eddie was on his last few days of residency before opening his own practice in Floresville, so the timing was critical in many ways. Everything was beginning to shut down and Patrick as he was just a few days short of needing dialysis. Eddie was also able to connect us with a specialist in Dallas for upcoming surgeries. Small town people, good neighbors, and friends taking care of each other, it was beautiful to watch, a God Wink”.
“Whether it be donations online, in private, donation to the bbq, this community has been so wonderful and we are grateful”, said his mother.
There will be a medical benefit fundraiser on January 23, 2021 for Patrick Rohde, a 2001 graduate of Devine High School. A BBQ chicken plate with Spanish rice, pinto beans, bread, pickles, onions and dessert will be served curbside from 11am to 2pm at the Flower Patch, 409 N. Teel in Devine. Donation is $10 per plate.
Pre-sale tickets are available from Missy Sultenfuss and Robin Rutledge at Get More Insurance, 111A South Teel in Devine (210-532-2081). This building is located across the street from where Charlie’s II Restaurant was located. You can also pickup tickets from Danny Lawler at Harrison Supply, Highway 173, Devine. Building is located next to Morales Feed and across highway from Devine High School. Or at the Cleaners next to DQ.
If you need more ticket information, text Donna Rohde at 210-508-2389. Numerous individuals will be selling tickets around town.
A Go Fund Me has been set up on Patrick’s behalf.

His wife Alison stated, “Patrick has been suffering many years with urinary issues. He was born with a medical condition called Hypospadia. He had an operation as an infant to correct the condition. I understand this procedure was not a complete success and Patrick has had painful urinary issues almost his entire life. In his twenties he underwent another procedure to try and correct some of the issues left behind by the first operation. This caused more problems in the long run, and left behind a lot of scar tissue and damage.”
“My husband is one of the strongest people I know,” she adds.
On Monday, January 4, 2021, Patrick was hospitalized in New Braunfels. He became extremely ill and doctors said he had a very rampant infection in several organs including his prostate, kidneys, bladder, which had spread to his bloodstream. Rhode just underwent one major surgery and will have many more medical expenses before the problem can be corrected.
“Sadly, like many struggling Americans, we do not have health insurance,” Alison said. “With Patrick being in the hospital almost a week and counting we are already in more debt than people deserve in one lifetime. He desperately needs this surgery so he can get his life and his health back on track. I am humbly asking for your charity and good will to please help a wonderful man experience life at his best. I know times are hard for most and we are so grateful for anything you have to offer, even if that is just kind thoughts or words sent our way.”
Rhode is a 2001 graduate of Devine High School and has lived in Devine, Tx. most of his life. His parents, Marvin & Donna Rohde, will be putting on fundraisers as well and have helped many others in our community.
This Go Fund Me can be found online at
https://gofund.me/04426fd9. You will be able to see more information on this site as to his current medical condition. Thanking you in advance for your support, thoughts and prayers.
By Kayleen Holder & K.K.Calame