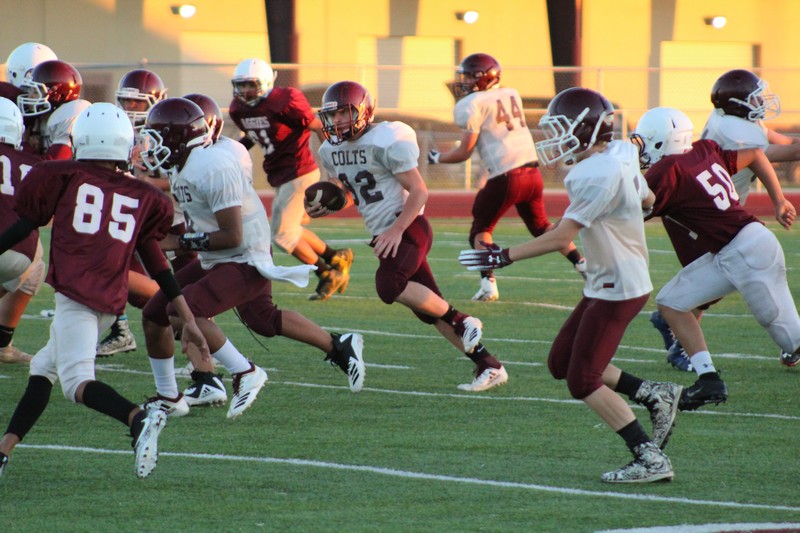 In their last game of the season, the 8th grade Colts played as a combined team and beat Carrizo Springs on their field. The game started off with a 55 yard run by Nate Ramirez after Marcus Rodriguez handed it off to him. Ramirez was stopped on the 5 yard line but was able to run it in the next play for their first touchdown. “Jaieden Burford ran the option and pitched it to Aiden Zapata who barreled over a couple of defenders for the 2 points,” reported Coach Lon Cozby. On the next kick off the Carrizo Springs returner fumbled the ball and Enrique Midobuche scooped it up. Burford threw a 25-yard pass to Camden White for another touchdown. The final TD of the quarter came when Burford passed to White for a great catch in the back of the end zone. The half ended 22-0
Ryan Connor found the end zone after he made an interception and Aaron Sanchez completed the 2-point conversion. Carrizo Springs was finally able to score a touchdown but could not get the extra points. “Burford threw a 2yd pass to Jathon Razo for the next td but it was called back, so instead Burford threw a 7 yd td to Razo this time for the score,” said Coach Cozby.
In the final quarter, Carrizo Springs ran in a 30 yard run to make the score 34-12. The Colts used the final quarter to get every player into the game.
“This season was a blast. This group as a whole has talent at every position. The hardest part of the year was spreading the wealth. It was hard to get the reps every kid deserved due to lack of time. Some weeks we didn’t have a B game which made it even more difficult on playing time. But in the end, this group learned a lot, grew up some, and most importantly had a blast dominating competition,” stated Coach Cozby.
By Dicy Chambers
Sports Writer