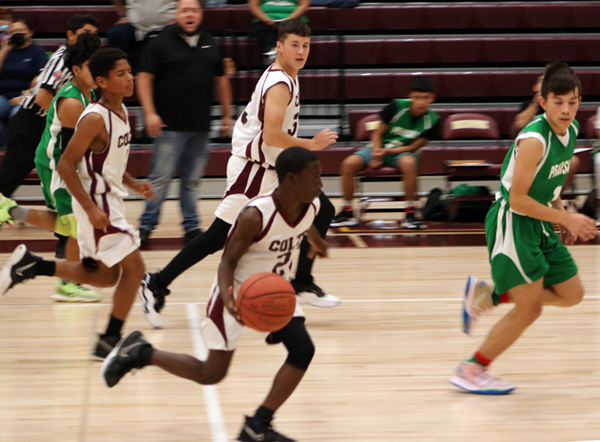 The Devine Middle School 8th grade Maroon and Gold Colts each earned convincing victories over Pearsall last Thursday in the DSAC gymnasium. The Maroon won easily 43-15 while the Gold pulled away for a 36-23 triumph.
Maroon
The Maroon team jumped out to a 9-3 lead after four different Colts made baskets in the first six minutes of the ballgame. Mason Beaver, Ray’sean Beaver, and Jackson Hagdorn each converted a two-point attempt while Tanner Davis sank a shot from 19’9” that was good for three points.
Christian Monreal and Cecilio De La Garza made two baskets apiece in the second quarter and Tyler Hinnant made a basket and hit a free throw to push the Colt lead to 20-10 going into halftime.
Mario Vicente and Karson Ray added their names to the scoring column in the third quarter as Devine upped their lead to 30-12 going into the final quarter.
Mason Saunders nailed a three-pointer midway through the fourth quarter to give every Colt at least a point in the ballgame.
Leading all scorers was Ray’sean who finished with seven points, while Christian, Cecilio, and Jackson each had six points. Mason and Mario each scored four points, Tanner, Mason, and Tyler each had three points, and Karson had one point.
Gold
The Gold team raced out to a 7-2 lead and never looked back as they cruised to a 36-23 victory. The Colts put up 12 points in the second quarter to take a 19-7 lead into the half.
Devine scored nine third-quarter points to increase their advantage to 28-13, and put up 11 more in the fourth to close out their 16-point victory.
Leading the way was Riley Gutierrez, Jorge Silva, and Ty Sadler who scored 11, 9, and 8 points respectively. Those three combined to score 12 of the 19 first half points.
Deryck Frazier, Briar Parsons, and Bob Hicks-Hernandez each scored three points and Bo Wheeler chipped in a single basket. Caden Mann and Jeremy Steinbrenner also contributed to the Colt win.
By Jerel Beaty
Staff Writer