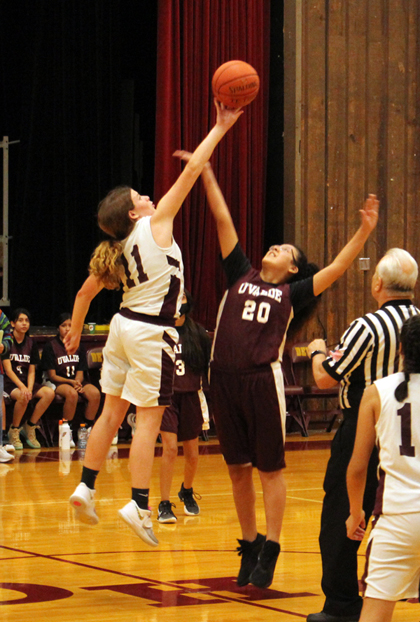 The Maroon Fillys have had an impressive series of home games in November. They beat Uvalde, Crystal City, and Hondo and will take on Pearsall tomorrow, December 2nd. Led by Coach Sandy Lawler, the Maroon Fillys have a great season ahead of them.
Taking down the Wolves on November 3rd, the Fillys won 38-8 with Kylie Monreal leading the team with 24 points. Kyrie DuBose had 6 points, Milynn Schnautz 5, and Calleigh Schneider 1.
Crystal City was next to fall to the Fillys at 47-17, on November 11th. Schnautz and Monreal were both in double digits with 10 and 24 respectfully. Schneider had 2 points and Elena Rivera also had 2.
Facing their rivals on November 18th, the Fillys beat Hondo 51-5. Again Monreal led with 16 points but DuBose was close with 14 points. Caroline Suhr had 2, Zabella Garza 9, Leslie De La Santos had 4 points.
By Dicy Chambers
Sports Writer