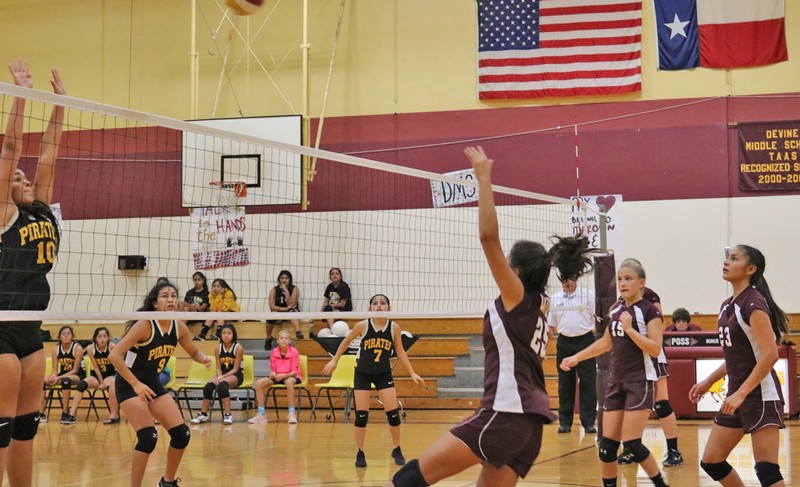 Click here for photos of the 7th grade Fillys!

In their home tournament, September 22nd, the 7th grade Maroon Fillys beat every team that came against them. Natalia was the first to fall at 25-16 and 25-17. The Fillys worked hard to keep the ball off the floor and back across the net. Natalia was just not able to keep up with the Fillys’ ball control.
Rylee Esquibel had 7 hits, Brooklyn Miller 6, Kate Featherly 6, Denise Contreras 3, Mackayla Schnautz 1, and Zoe Ortiz 1 hit. Featherly had 5 aces, Kody Blanquiz 2, Esquibel 2, Kelsey Dishman 1, and Lizbeth De Los Santos 1 ace. Featherly and Esquibel each had 2 assists and Contreras 1 assist. Brooklyn Miller had 3 kills, Esquibel 3, Featherly 3, and Contreras 1 kill. Each with one dig was De Los Santos, Dishman, Esquibel, Featherly, and Kaylee Romano.
In their second and final game of the day, the Maroon Fillys stomped Pleasanton 25-14 and 25-5. Devine played hard and never gave up the intensity while listening to their coach and making adjustments where they needed them. Pleasanton was just not able to get the ball set up and back over the net.
De Los Santos had 3 aces, Featherly 3, Romano 2, and Esquibel 2 aces. Miller had 6 hits, Esquibel 5, Featherly 3, Contreras 3 Schnautz 2, and Ortiz 1 hit. Miller had 4 kills, Esquibel 2, Featherly 2, Contreras 2, and Schnautz 1 kill. Romano, Featherly, and Esquibel each had 1 dig while De Los Santos and Dishman had 2 digs each. Esquibel had 3 assists, Featherly 2, and Dishman 1 assist.
“These girls are undefeated so far and we are having a blast. We still have a lot to learn, but they catch on fast. But my girls stayed after it and took the win! I am so proud of them. Great job Fillys!” Coach Shana Beaty.
By Dicy Chambers
Sports Writer