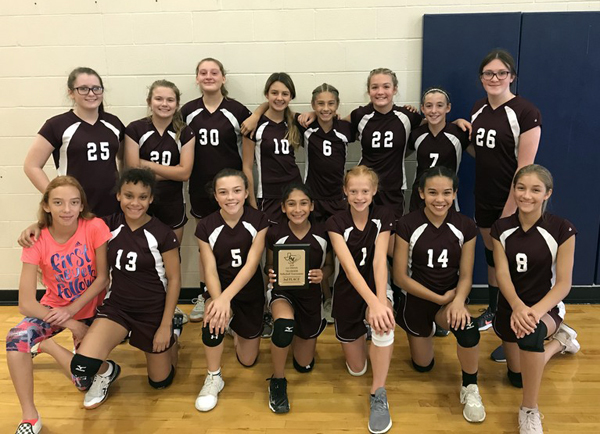 The 7th Grade Maroon Fillys participated in the La Vernia Tournament this past Saturday. They found themselves in a tough pool including Stockdale and La Vernia. In their first game, the Fillys played Stockdale and were able to take the game in two sets at 25-17 and 25-23.
In their second game in pool play, the Fillys faced an extremely tough and experienced La Vernia group. The experience of La Vernia showed immediately as they pounded serve after serve at the Fillys. Despite their best efforts, the Fillys were not able to overcome the power of those serves dropping set one 1-25 and set two 7-25.
It was time to respond to the defeat as the Fillys next opponent would be Poth, the 2nd place team from the other pool. The Fillys knew it would be a good challenge because Poth has a winning tradition in volleyball. It did not start off as well, as the Fillys were still shaking off the earlier loss. Poth took the first set in a close game. Unwilling to go down easily, the Fillys rallied and took the second set 25-18. The third set was close with each team scoring one point at a time. Devine was able to capture a few points here and there and that eventually ended up being the difference as the Fillys won 15-12, taking 3rd place in the tournament
By Coach Julie Oropeza