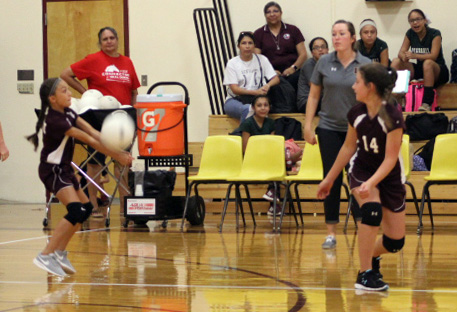 The 7th grade Filly’s finished their season against Carrizo Springs last Monday.
Fillys Gold
The Gold team won in two games, 25-17 and 25-18.
Offensively, they had quite a few aces during the game; Yesenia 4, Rebecca and Andrea each with 2, and Leah and Joselyn each with 1. There were 5 hits; Andrea and Leah each with 2 and Autumn with 1. There were also 2 assists made by Leah.
Fillys Maroon
The Maroon team put up a tough fight but lost in three games; 25-22, 27-25, and 20-25.
Offensively they had 4 aces made by Neenah, Amber, Kristina, and Korynn. They had 9 hits; Bailey 4, Korynn 3, and Cameron and Madison each with 1. They also had 3 assists made by Amber and one kill made by Madison.
Defensively, they had one block made by Madison.
“The girls finished the season with a tough outing and I am very proud of their progress,” Coach Megan Perez said.
By Abby Kohlleppel
Staff Writer