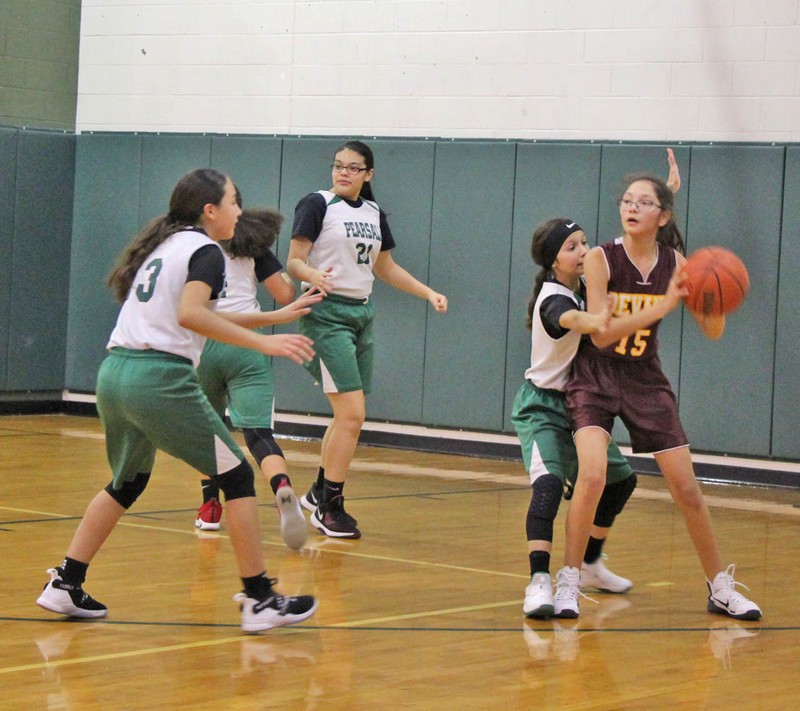 7th Maroon Fillys
In their final game against Carrizo Springs, the 7th Grade Maroon Fillys were strong and aggressive for their final win at 33-14. Putting everything they have learned to work, the Fillys were able to control the game and stop Carrizo Springs from getting to the basket. The Fillys took the lead in the first quarter and never looked back
Denise Contreras scored 14 points, Kelsey Dishman 5, Makayla Rivera 4, Mackayla Schnautz 4, Zoe Ortiz 2, Lizbeth De Los Santos 2, and Liah Romero 2. Avery Mobley had 3 rebounds, Contreras 4, Ortiz 4, Romero 2, Dishman 1, Pamela Cardona 1, and De Los Santos 1 rebound. Scores by quarter: Q1 12-6, 16-8, Q3 25-8, Q4 33-14.
“I’m so proud of these girls this year. They are a great team to work with and I enjoyed every minute of it. We got second place to Hondo in district; so next year Hondo better watch out!” said Coach Shana Beaty.
7th Gold Fillys
Facing Carrizo Springs in their last game of the season, the 7th Grade Gold Fillys beat them to earn 3rd place in district with an overall record of 5-6 and a district record of 5-4. Leading 4-2 at the end of the first, Carrizo Springs attempted to come back in the second half but couldn’t get past Devine’s defense and the half ended 10-8. In the second half, Devine dominated offensively and ended the game 23-15.
Austin Little scored 6 points, Yari Mercado 5, Iris Stricker 2, Emily Mares 2, Cameryn Darby 2, Kiara Yracheta 2, Alissa Zamora 2, and Alanna Monreal 2. Mercado had 5 rebounds, Little 4, Mares 3, Espi Camillo 2, Jazlynn Brisano 2, Stricker 1, Darby 1, Skyla Sockwell 1, Kiara Yracheta 1 and Monreal. Scores by quarter: Q1 4-2, Q2 10-8, Q3 21-9, Q4 23-15.
“The players on this team finally started showing some “chemistry” on the court towards the end. I’m so proud of their effort and the improvements they have made. I can’t wait to see them play next year!” said Coach Beaty.
By Dicy Chambers
Sports Writer