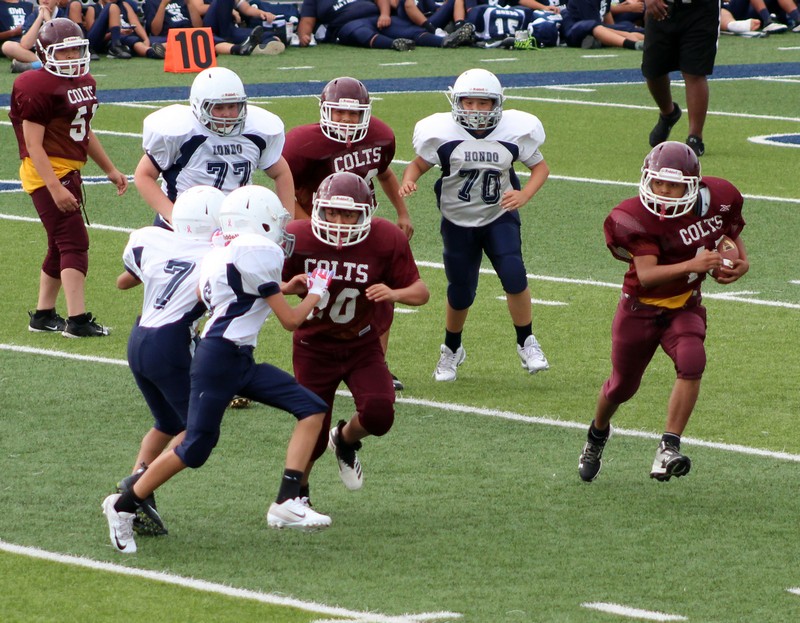 Click here for more photos of the 7th grade Colts vs Hondo!

After a long hard battle, the 7th Grade Gold Colts and Hondo Owls end in a 0-0 tie last Thursday night. Both teams play great and could not break through the others defense for a score. “Dominique Valerio ran the ball hard all day long. Ace Urrea and Roger Gutierrez lead the defense in a great effort for a shut-out. I couldn’t be more proud of all the guys on this team as they stepped up and showed what Devine fight is all about. This team doesn’t get too many games of their own so it was fun to watch them have the field to themselves to showcase their talents,” said Coach Quenton Sanders.
The Colts are now half way through their season and will face Crystal City tomorrow night at home. Games start at 4:30.
Maroon Colts
In a show down of rivals, the 7th Grade Maroon Colts faced the Hondo Owls and came up just short of the win at 12-14. The Colts started off strong with a 75 yard kick-off return by Gabriel Esquibel.  The Colts would be behind until the clock showed four minutes left when Elijah Sanchez broke through the line and scored the second touchdown of the game. The defense would hold the Colts’ lead and get an interception by Sam Guardiola that would hold the Owls until the last twenty seconds. The Owls were able to score and take the lead and win.
“We showed a lot of fight marching the ball down, and scoring late in the fourth, but the accumulation of mistakes were just too much to overcome. I look forward to see how we respond to a loss vs. Crystal City. I know my guys are ready for battle.” -Coach Quenton Sanders
By Dicy Chambers
Sports Writer