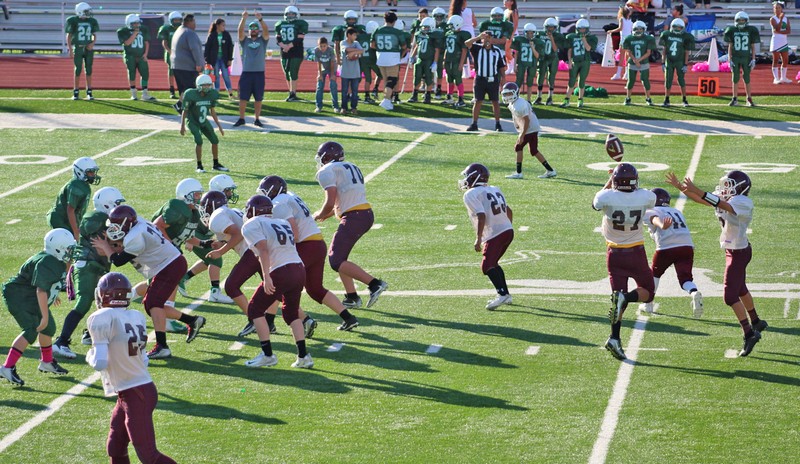 With a final score of 46-12, the 7th grade Colts played hard and earned their win. “I was very impressed with the amount of energy and how physical we played Pearsall. The tone was set on the opening kickoff with a couple of big hits,” said Coach Quenton Sanders.
Their night started with Gabriel Esquibel running in a 51 yard touchdown and Jonathan Weinkam completing the two point conversion. Sam Guardiola found Elijah Sanchez for a 15-yard pass and a touchdown. Kolt Hackebeil caught the pass on the two-point conversion. “Guardiola found pay dirt next on a 29 yard run with Esquibel scoring the two-point conversion,” reported Coach Sanders. After a 10 yard run, Adrian Gutierrez scored and Dominique Valerio completed the two point conversion. Sanchez caught a 38-yard touchdown pass from Guardiola, and Dominique scored another two-point conversion and ended the half 40-12.
The only score for the Colts in the second half was from Seth De Leon on a 63 yard run to make the final score 46-12.
“Derrick Razo was the defensive MVP with two interceptions. Our record is 3-1-1 with two games left in the season. It’s hard to believe that the season is almost over, but I think our best football is still to be played. I am having a ton of fun being around this group of young men. Next up is the Aggies of Poteet, and we cannot wait for that challenge.” Coach Sanders
By Dicy Chambers
Sports Writer