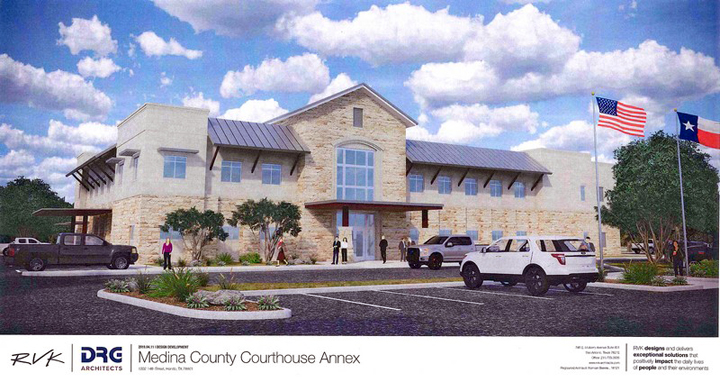 Medina County Commissioners unanimously approved the formal design for the courthouse annex and jail expansion in Hondo at the Commissioners Court meeting held last Thursday, April 11.
Groundbreaking is still months away, as the jailhouse annex plans must be sent to the Texas Commission on Jail Standards for review and approval.
The projected cost of the courthouse annex, which will be built on 14th St. and Ave. M, is $12 million, while the addition to the existing Medina County Jail is estimated at $10 million.
Plans call for the annex to have a stone facade to tie in stylistically with the existing courthouse, as well as a metal overhang over windows and a security vestibule at the public entrance. The first floor will house the County Clerk, County Auditor, County Treasurer, County courtroom, Elections office, and offices for the Precinct 1 and Precinct 3 Commissioners.
Two courtrooms, two jury deliberation rooms, the District Clerk, and offices for the County Judge and District Judge will be located on the second floor.
The jailhouse expansion will increase inmate capacity to 192, add a sally port for secure inmate transport and other deliveries, and expand the existing kitchen and office space.

While the County has money in reserve to contribute to the projects, the bulk of the financing will come through bonds.
“By the time we have to go out for the bond amount, we may not have that number tied down, but we’re going to come as close as we can,” County Judge Chris Schuchart said. “Because the Legislature, with what they’re doing, we need to get this bond done by September.”
The Texas Senate passed Senate Bill 2 on April 15, a property tax reform measure which will force cities, counties, and other taxing entities like emergency service districts (ESDs), hospital districts, and school districts to get voter approval before raising 3.5 percent more property tax revenue than the previous year.
An initial draft of SB 2 set the trigger at 2.5 percent, a figure Schuchart said would be “devastating to this county.”
“We will not be able to finance the growth that’s coming in right now,” Schuchart said. “It will also be devastating even more because right now in the House bill, non-elected debt is going to be thrown back into the rollback equation, and we don’t have anything but non-elected debt.”
The House has postponed discussion of its version of property tax reform, House Bill 2, until April 24. HB 2 exempts ESDs, school districts, and hospital districts from the 2.5 percent rollback election trigger.
Currently, taxing entities can bring in 8 percent more property tax revenue that the previous year before voters can petition for a rollback election, a figure that Medina County was close to hitting in 2018 thanks to an ongoing surge of growth.
By Marly Davis
Staff Writer 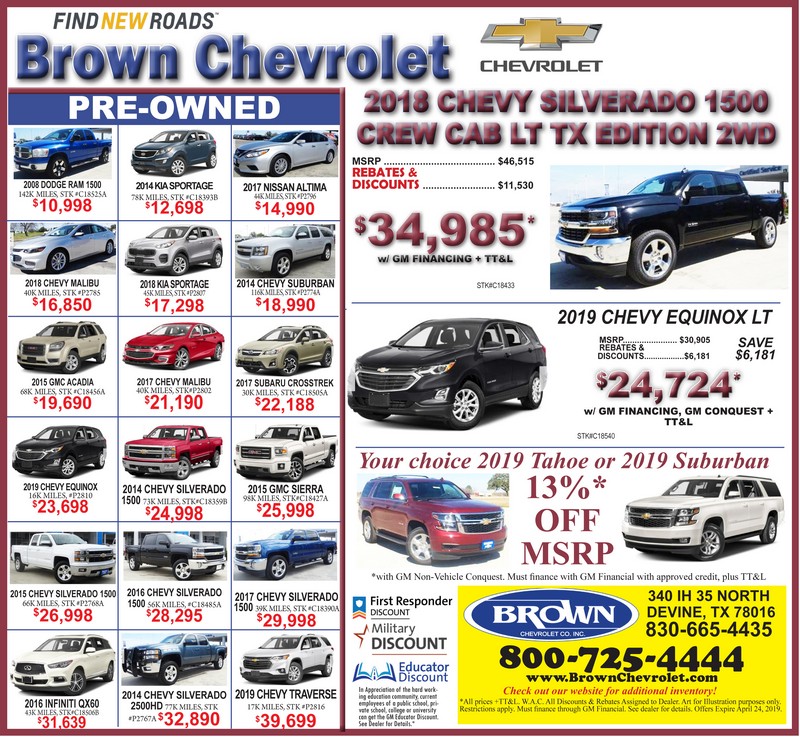