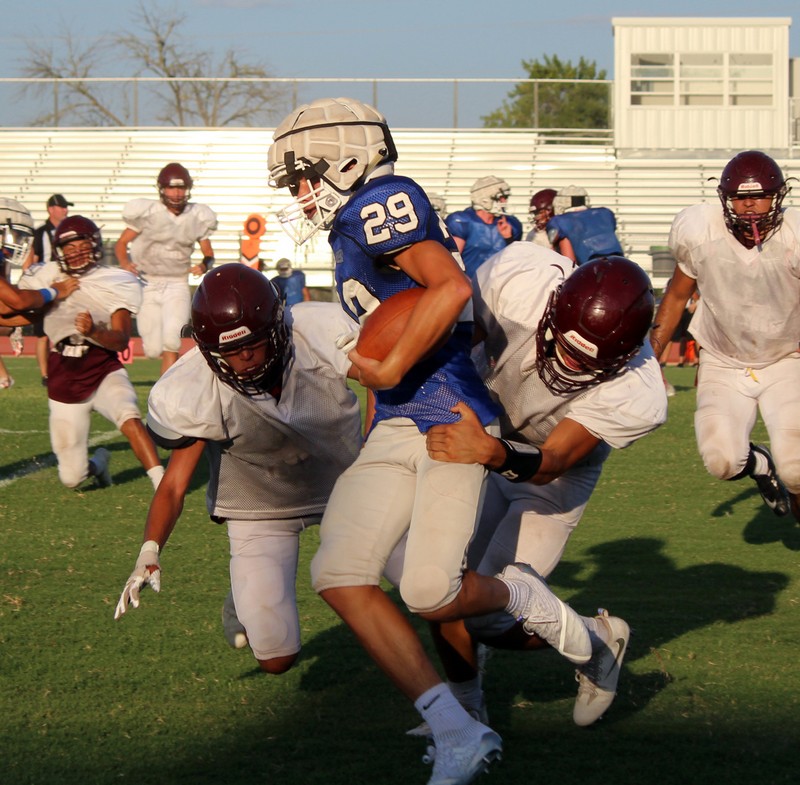 The Devine Warhorses get a mild shot at redemption against the team that knocked them from the 2017 state football playoffs as they match up against the Navarro Panthers in Geronimo on Thursday evening. Panther Head Coach Rod Blount takes the reigns from Les Goad who left after last season to lead the Hayes Consolidatedfootball program.
“New coach but nearly the same style of play,” according to Warhorse Head Coach Paul Gomez. “They are still going to run the nasty slot like they have in the past, there just may be some new keys for us to read however. Each of the slot-type offenses have their own distinctions.”
Having two live scrimmages against unfamiliar opponents this season instead of the traditional intersquad followed by a regular scrimmage provides the coaching staff to get a more accurate evaluation of exactly who belongs where team-wish and position-wise as well as who is making the biggest amount of strides in performance since the beginning of two-a-days.
“We want to see improvement in every aspect of our game,” Gomez elaborated. “Now that we played another team and have had a chance to teach and learn as well as to understand how we have to raise our intensity in everything we do, I expect us to do be much better on Thursday. We will need all of those components because Navarro is a ranked team that many have predicted to be in the regional finals. We are definitely excited to see where we stand as a football team. Having the opportunity to play two live quarters at the end of this coming scrimmage, it will absolutely give us some game-day atmosphere that we really need. It will be a great test for us and is definitely what we need to get us ready for our home opener versus San Antonio Kennedy on August 31.”
Navarro outlook
Navarro has 22 lettermen returning from a 12-1, regional finalist team whose sole loss came on their final game of the season, a 38-24 loss to Cuero. The Panthers present a formidable challenge with five starters coming back on each side of the ball.
Dave Campbell Magazine predicted Navarro to finish third in District 13-4A. With Cuero tabbed as the predicted champion and Wimberley in the number two spot, third place patiently awaits a talented Navarro club.
Listed as the players to watch are Wyatt Tate (OL), Rawson Young (TE/DL), Michael Gilbert (OL), Chris Gomez (RB), Euler DeLeon (RB/DB), Johnny Alegria (RBDB), Bryan Butler (QB),George Bradley (WR/DB), Dylan Hatfield (DL), Ty Brumley (OL), Brett Butler (OL), Keith Schwarzlose (RB/DB), Gabriel Means (TE/LB), and Ramon Munoz (TE/LB).
“They have two good-sized linemen in Tate and Gilbert,” Gomez commented. “Although our guys will have their work cut out for them, I think we will be ready for that challenge.”
Gomez rushed for 1,152 yards and 15 touchdowns a year ago. Alegria, last season’s newcomer of the year, will get more touches this season after gaining a respectable 552 yards and seven touchdowns in 2017. From a defensive standpoint, DeLeon had 84 tackles last season followed closely by Young who accounted for 67 tackles and 3 quarterback sacks.
Two-a-day update
Coach Gomez and his coaching staff continue to put in long hours working out kinks, evaluating players, developing schemes, and prepping the players for a long season. With school and the preseason schedule both starting next week, the remaining time between coaches and players is vital to going into the season well prepared.
Gomez commented on the Warhorses current state of progress. “I think our skill kids on offense are one of our biggest positives. Chad, Grant, Guido, Justin, Isaiah, Leonard, Xsavior, Donovan, Sergio and Malachi offer speed and explosiveness. Coach Wells will have the offense ready to roll.
Our O-Linemen are working hard and giving great effort but there is so much more involved with that unit. That has to be a close group. Communication is extremely important and the more these young men play together, the better our execution. Coach Rotramel does a good job with those men and they will definitely get better.
Defensively, we want to keep attacking and trusting our reads. Our tackling and being aggressive at the point of contact need to continue to improve. Coach Villa will have the D-side ready to go.
By Jerel Beaty
Staff Writer