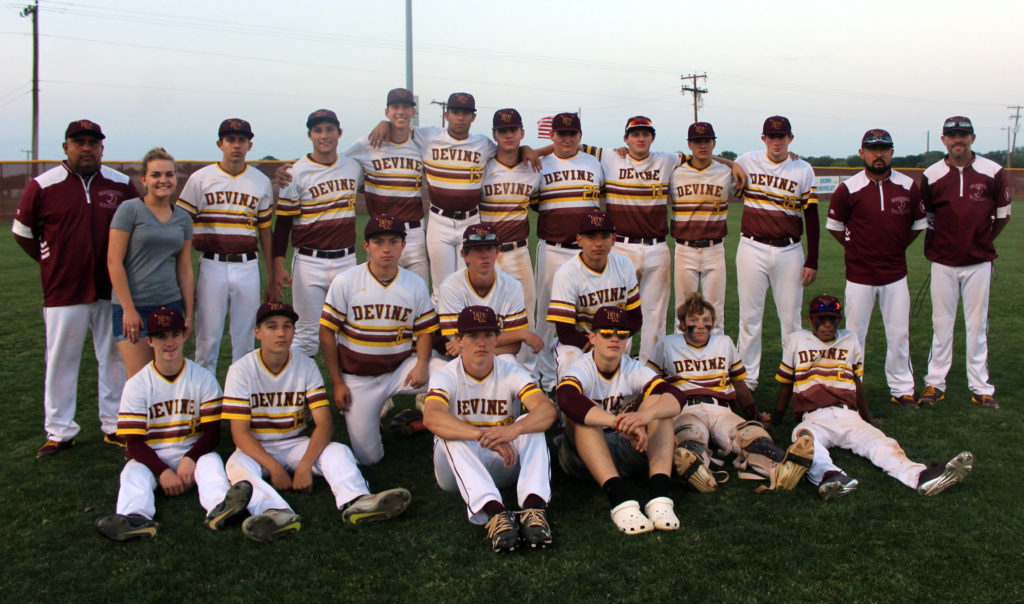 With almost error-free fielding backing him up, senior pitcher Connor Schmidt threw a complete game shutout to give the Warhorses their second championship in the last eight days. Devine beat Lytle to win the District 29-4A championship outright on April 24th while the 6-0 victory over the fourth place District 30-4A representative Somerset Bulldogs on May 2nd gave the Warhorses their first Bi-District championship since the 2016 season.
Great pitching combined with flawless fielding beats soft hitting and poor execution every time. Somerset put the ball into play at times, which made the Warhorses 92% fielding percentage a key factor in keeping Bulldogs out of scoring position. With senior battery-mate and good friend Kyler Brown catching Schmidt’s 80-85mph heaters and 70-76mph sliders Somerset struck out 9 times, eight of which were swinging third strikes. The Warhorses lone error came on an errant throw to first base after one of the 9 K’s. No matter. Schmidt caught that ‘baserunner’ trying to advance to second, picking him off on a throw to senior second baseman Matt Ornelas who applied the tag. That out put the final wraps on a decisive victory.
“The Somerset victory was a great win for our team,” stated Schmidt who is now 8-1 on the season. “It really boosts the confidence level of our entire team and it will give us a spark as we make a run in the playoffs.”
The Warhorses did not waste much time getting a run registered on the Brown Auto Stores right field scoreboard. Newt Crouch drew a walk with one away in the bottom of the first inning then advanced to second on a passed ball. Truett Barron reached first on an errant throw by the Bulldog third baseman, scoring Crouch for the early 1-0 Warhorse lead.
Not knowing at the time that one run would be enough to clinch Bi-District, the Warhorses piled on four more in the bottom of the second thanks largely to three Bulldog fielding errors. Chad Lawson lined a 0-1 pitch to center to start the inning then promptly stole second on a first pitch ball to Tristan Kramer. Kramer reached on an error by the Somerset third baseman. Isaac Solis perfectly executed a sacrifice bunt to advance the runners. After Brown drew a walk to load the bases, Crouch followed with an RBI groundout scoring Lawson. Schmidt walked to reload the bases. A Bulldog error by their second baseman on a ball put into play by Barron scored Kramer and courtesy runner Brady Harrell to put the Horses up 4-0.
Matt Ornelas hammered an RBI single to center to score courtesy runner Gehrig Runyan but Barron was tagged out at second to end the inning with Devine in front 5-0. The Horses tacked on an insurance run in the bottom of the third on a passed ball with Kramer scoring from third after reaching on a one-out single earlier in the inning. That unearned run closed out the scoring. 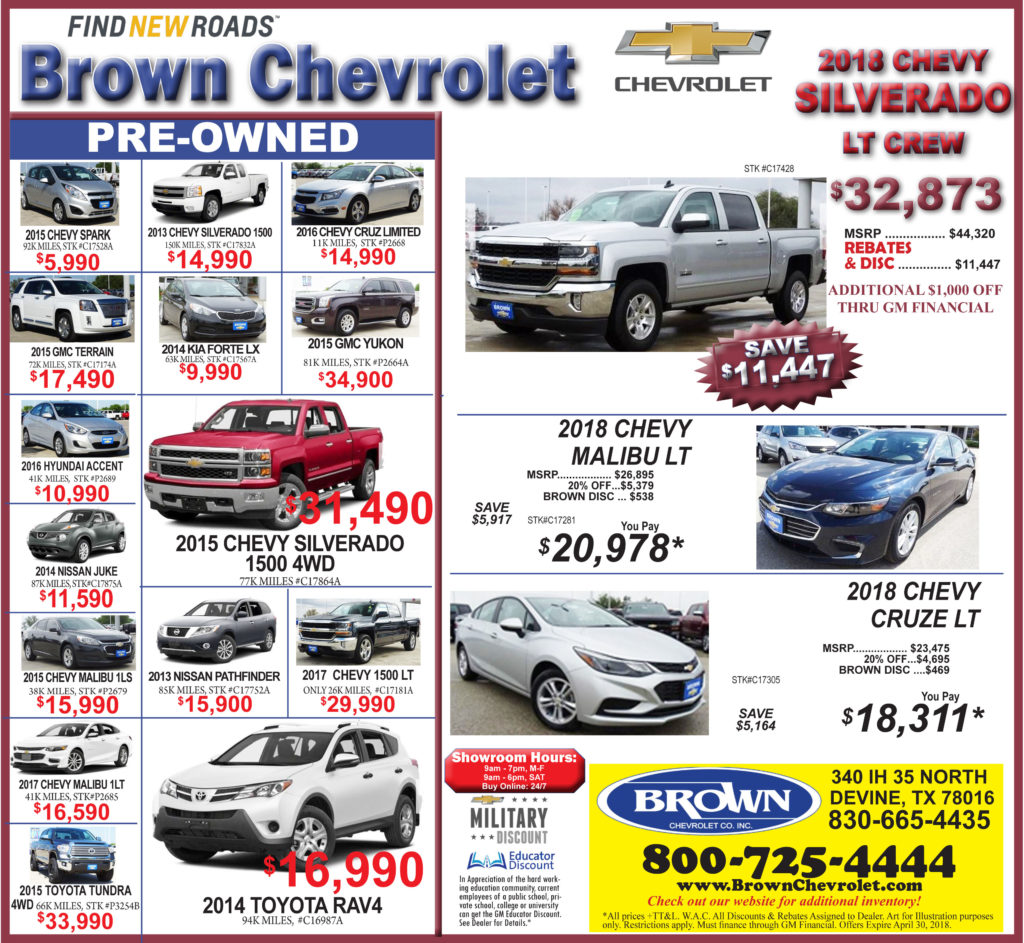 Kramer has been a steady presence at third base throughout the season. He was 100% fielding in the bi-district win throwing bullets to senior first baseman Jerrod Taylor on all three balls hit to the hot corner. Kramer was also a vital part of the offense going 1 for 3 and scoring two runs.
“Last week’s game was exhilarating. The point of the game is to have fun and that is exactly what we did last time out,” stated the senior third baseman. “I think as a whole we are actually starting to figure out how the game of baseball is supposed to be played.”
Pitching gem
Schmidt was solid on the mound. His 75 pitch complete game performance only tells part of the story. Of the 75 pitches, 60 were strikes and he continually got ahead in the count with first pitch strikes on 22 of the 24 batters he faced. Eight of the nine strikeouts Schmidt recorded on the evening were via a third strike swing and a miss. Bulldog batters looked baffled. Somerset had three hits on the night and managed only one base on balls. Of the five batters to reach base, two were subsequently picked off.
Schmidt’s ground out to fly ball ratio was 6 to 5 with Warhorse fielders cleanly playing each of those opportunities. A complete team win going into an Area match-up gives Devine a lot of momentum as they seek their third championship in as many weeks.
Mind set
With the Bulldog batters obviously out of rhythm against Schmidt, the Warhorses had to develop their own type of mindset going into a playoff game against an opposing team’s number one starter.
“Our biggest thing when it comes to any pitcher is rhythm and timing of the pitcher,” stated Head Coach George Villa. “Regardless of their velocity, our rhythm and timing have to be in sync with the pitcher in order to give ourselves a great opportunity to create a quality swing.”
Sixteen quality at-bats resulted from the thirty-two times a Warhorse batter stepped into the box. Seven hits, six walks, a hit batter, a sacrifice bunt, and scoring six runs definitely puts the Warhorses in the category of accomplishing quality swings.
Fast-paced
Although the game went the regulation 7 innings, it was played in just an hour and fifty-five minutes. Early on, however, the game had an even quicker tone. After three complete frames and a 6-run lead going into the top of the 4th, fans (and maybe even a couple of guys sitting in the press box) began to eye the likelihood of a 10-run whitewashing. It was imminent, or so we thought. In fact, the DJ even bumped up the traditional mid-5th, fan-favorite YMCA karaoke and arm-gesticulating song to the middle of the 4th inning in anticipation of a quick 4 ½ inning championship ballgame.
Nit picking
If there was a fallacy in the well-played game by the Warhorses, it was the 8 baserunners left on base, two thrown out at the plate, and two additional thrown out on the base paths. As another playoff game looms and the talent level of teams remaining in the state playoffs increases, finishing off scoring opportunities will be one area that will need to improve to advance to Regional.
According to Villa, the team’s “approach at the plate needs to be about the situation. Where are the runners? How many outs are there? Things like that. We have situational hitting practices at least twice a week where I give points according to their performance. We now call that practice, “Operation Game Time”. We want a game-time mind set from our players at the plate.”
Area matchup
Devine will play H.M. King in a best 2 out of 3 playoff series for the Area championship at Three Rivers on May 11 and possibly May 12. The Warhorses and Brahmas will play a double-header Friday with game one first pitch delivered at 5:00pm. Game two will start approximately 30 minutes after the conclusion of game one. Saturday’s game three (if necessary) is set for 4:00pm.
By Jerel Beaty
Staff Writer 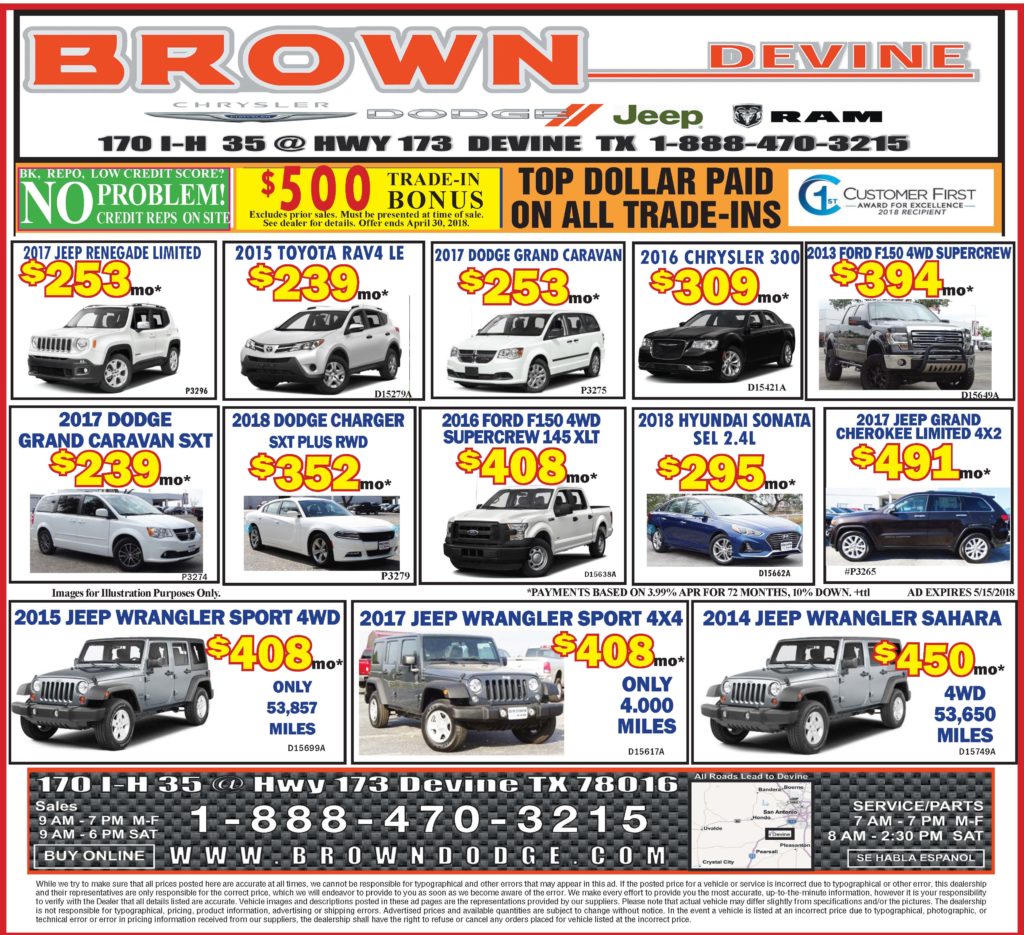