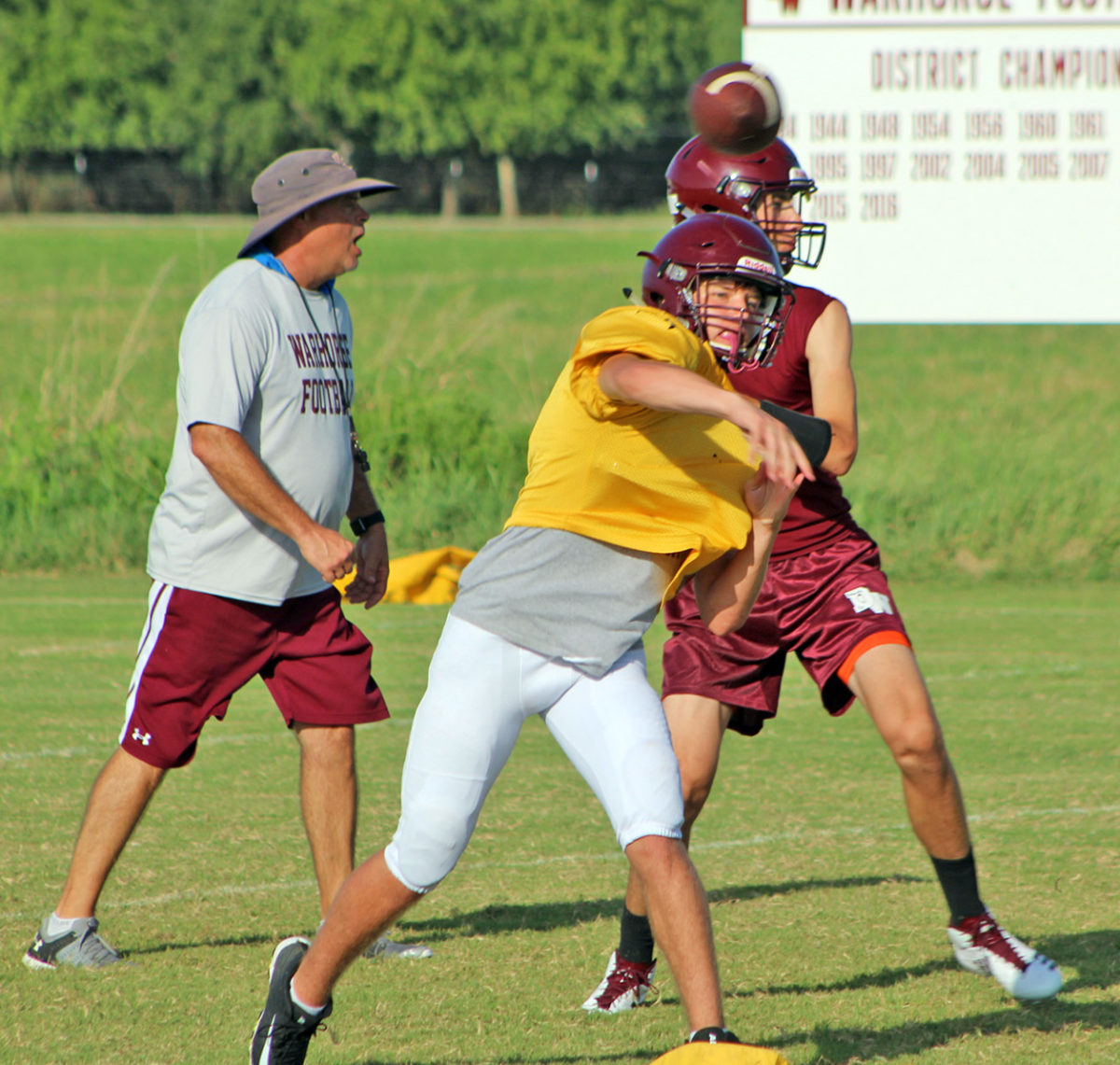 After the initial day of training camp that saw over 3 inches of water standing on the practice field, second week weather returned to what is normal around this time of year…hot and dry. The players, and even the coaches, battled the heat to the best of their ability in preparation for the upcoming scrimmages and ballgames.
Battling heat is not something new to football players and coaches in south Texas though. Competing against the same person day-in and day-out during practice is also something that is not new. Some of those battles will take on new meaning over the next couple of weeks as the Warhorses host their inter-squad and Navarro scrimmages with players trying to make some final impressions on their position coaches.
“I know we are only in the second week of practice but it is time to go against someone new,” stated Head Coach Paul Gomez. “We have a veteran group who is eager to step onto the main field to show they have improved since the end of last season.”
Those wanting to get to the season in a hurry are naturally some of the players who are currently in the midst of their fourth two-a-day for their career. “The seniors have shown great leadership throughout camp, encouraging each other and demanding great effort on a daily basis,” said Gomez. “That needs to continue and the players’ energy does not need to drop off as we transition from week to week.”
O-Side
On the offensive side of the ball, the Warhorses are adding some new wrinkles to old schemes and implementing some new ideas all together. Gomez, “We continue to improve offensively little by little. We are able to add new plays and advance others without losing what we have already learned.”
PJ Wells, Offensive Coordinator, on the players learning new wrinkles to an unlimited offensive scheme, “The kids are doing a good job of catching on to new ideas, terminology, and adapting to different schemes. Their attentiveness has been outstanding.”
D-Side
Gomez understands in order for his team to be successful, they cannot have defensive performances that are commonplace in the Big 12. “We have to be aggressive on defense and the players have shown that they can be. There is still a lot for them to learn, but I like where we are at this point.”
George Villa, Defensive Coordinator, liked his unit’s attention to detail so far through camp. “Although we didn’t have the energy at practice on Monday like we had the previous Friday, we still had a lot of carry-over as far as alignment and responsibilities. During the four days in shorts, we were able to teach the kids a lot of the little things that are important once the pads go on for a real game.”
From the Horses…
Guido Zapata-I feel like we had a great first week of practice. Both the players and coaches had some incredible energy all week, but especially on the first day of pads. The team seems to be adjusting well to the new offense and defense, but we still have a lot of work ahead of us. Looking forward to another great Warhorse season.
Gideon Ramirez-This first week of practice has been tough. It’s hot and we’ve had tough drills and tough coaches. The whole week I looked at the team and realized we are tough kids. Our coaches will push us to be the toughest team we can be. We have worked hard on the field and I believe my brothers and I will go through every week like the one we did the first week, which is excited and ready.
Steven “Bulldog” Ramirez-This first week of practice could not have gone better! It really opened my eyes to how much we can accomplish this season. The sky is the limit.
King Cantero-I thought that everyone showed a lot of enthusiasm and commitment to get better. Our seniors are all demonstrating leadership by example. I have a good feeling that this season is going to be special.
Luke Torres-The coaches have been bragging on us daily about how well the team is coming together. We are going to continue to work hard to be the best that we can be. We have goals to advance far into the playoffs.
Noah Brogdon-The first week was crucial for us. New varsity players had to step into bigger roles. The coaches established the right mindset, which is ‘Team First’. Our whole week was based upon getting closer and working as one team. This week showed a lot of promise when it came to our unity.
Final thoughts
From listening to the coaches and players, it sounds as though the foundation Coach Gomez has the Warhorses building upon for this particular season is one of team unity. Gomez, Wells, and Villa each mentioned separately how the players are pulling for each other to be successful and how each encourage another to fight through the aches and pains of what seems like endless practices leading up to the season opener against Boerne on September 11. The players echoed much of the coaches’ assessments.
The team has time to build on the 2017 groundwork started on August 7, which was the first day of two-a-days. All high school players have time to make a positive impression on their position coach that they belong not only on the varsity squad but belong on the field to help the Warhorses have yet another successful season.
The best way to impress a Warhorse coach was alluded to by Noah Brogdon who said the coaches were emphasizing a “team first” mindset this fall. For players that can truly put the necessities of the team above singular wants, all of their hard work put into their individual time in the weight room and offseason training program has the potential to turn this season into another great experience for both the team and Warhorse Nation.
By Jerel Beaty
Staff Writer