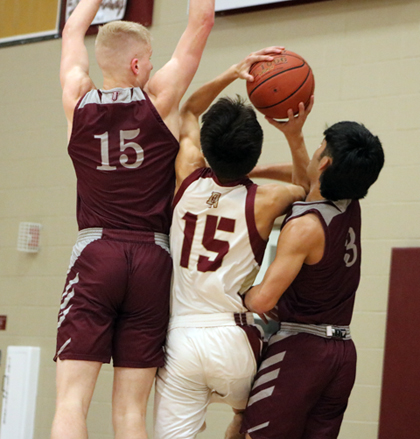 The Warhorses took on Uvalde and Carrizo Springs last week and played hard against the tough schools. Now 6-16 overall, the Warhorses look to working hard and winning every district game they play. With Somerset, YMLA, Brooks Academy, and Fox Tech in the district, Devine has a strong play-off chance this season. They open district play this Friday in Somerset.
The Warhorses faced a quick and accurate Uvalde team last night, which unfortunately resulted in a loss for the boys 41-79. However, within the first few seconds of the game Payton Carr recovered his own rebound and made a jump shot for the horses. A few minutes later, Xavier Contreras made his first three-pointer of the night. In the second quarter the Horses worked to get a few more points in from under the basket shots, and Sage Cruz recovered several rebounds. Defensively, Caden Hanson stuffed a Uvalde coyote and excited the gym.
Although the halftime score was 16-51 losing, the Horses kept fighting to the end. In the third quarter X. Contreras jumped into the air to recover a rebound and drove the ball down the court. He made a quick pass to Chris Ortiz who made a jump shot from under the basket making the score 23-63. The third quarter was a good quarter for Cruz. After making a layup, he stuffed a Coyote trying to make a layup making it possible for Chris Ortiz to get the rebound.
The fourth quarter was even better for the Horses, gaining a whopping 18 points. Kaiveri Alvarez had many assists, and several free throws. Ortiz and Carr had many block shots and layups, and defensively, Cruz again stuffed another Coyote attempting to shoot a three!
Offensively Marcus Espinosa sank a three pointer with 2:50 left in the game making the score 35-77. With seconds left of the game Caden Hanson broke up a Coyote press under the basket, stole the ball and made a layup ending the game and making the final score 41-79.
Points: Marcus Espinosa 5, Sage Cruz 2, Caden Hanson 2, Isaiah Morin 1, Chris Ortiz 8, Kaiveri Alverez 2, Peyton Carr 16, Xavier Contreras 5. Q1 7-23, Q2 16-51, Q3 23-67, Q4 41-79. FTP 60%.
On the road Friday night, Devine traveled to Carrizo Springs and came home with a 34-51 loss. The Warhorses were down a player or two and Coach Eads is “trying people at different positions. We will continue to improve.”
Down just three points at the end of the first, the Warhorses fell further behind in the second by being outshot 9-16. Carrizo was just able to sink their shots but Devine never gave in and played all 32 minutes.
Points: Espinosa 2, Cruz 3, Hanson 10, Morin 3, Ortiz 3, Carr 6, X. Contreras 5. Q1 9-12, Q2 18-28, Q4 24-43, Q4 34-51. FTP 26%.
By Dicy Chambers
Sports Writer