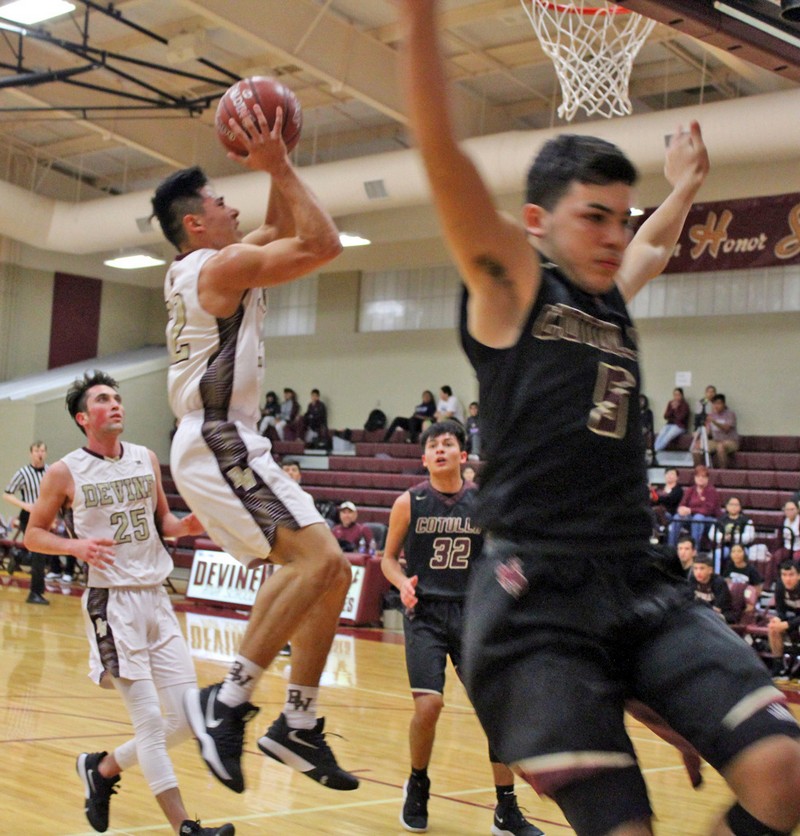 In their last game before the winter break, the Warhorses ended the first half of the season with a win over Dilley 49-35. Cash Walker had an impressive night with 25 points with help from his fellow teammates’ assists.
The game started off slow with a score of 6-4 at the end of the first quarter but the Warhorses picked up the intensity in the second and outshot Dilley 20-11. They continued to play aggressively in the second half, holding Dilley to less than 20 points while they scored 23 in the second half for the win.
Walker 25 points, Dalton Kramer 11 points with 2 three pointers, Brady Cardenas 4, Mason Burford and Justin Contrearas with 3 each, Sergio Martinez 2, and Kam Adams 1.
Warhorses struggle against Panthers
In their first game back after the winter break, the Warhorses struggled to keep up with the Panthers and they fell 57-64 after a comeback attempt. Coach Paul Wells and his team hosted Blanco on January 2nd after a 12 day break since beating Dilley.
The Panthers came out aggressive in the first and earned a 22-7 lead over the sluggish Warhorses. It was in the second quarter that Devine woke up and started to play but still trailed 21-36 at the half. Devine was able to close the gap even more in the third and ended the quarter trailing by only 6. It was a rough fourth quarter with each team playing hard for the win but Blanco was able to get the points they needed for the win 57-64.
Cash Walker led with 24 points, Justin Contreras 18, Dalton Kramer and Sergio Martinez with 4 each, and Kam Adams 3.
Warhorses beat Cotulla
Rebounding from their last tough loss, the Varsity Warhorses rebounded nicely with a win over Cotulla 78-53. Coach Paul Wells had to rally his team at the half for this victory and four Warhorses scored in the double digits for this win.
Being aggressive in the first quarter helped the Warhorses establish an early lead against the Cowboys at 22-15. In the second quarter, Cotulla closed that gap and only trailed by 1 at the end of the half. The Warhorses came out more aggressive and controlled the third quarter, scoring 25 points and holding Cotulla to one. In the final quarter of the game, both teams scored 18 points and Devine won 78-53.
Leonard Pompa sank 3 three pointers for 9 points, Cash Walker 24, Justin Contreras 14, Dalton Kramer 12, Brady Cardenas 10, Kam Adams 5, Sergio Martinez 3, and Mason Burford 1.
Warhorses faced Fredericksburg
Monday night, the Warhorses faced Fredericksburg and after a tough battle, the Warhorses fell 58-65. Devine was able to keep pace with the Billies in the first quarter but Fredericksburg pulled ahead in the second to end the half 17-33. In the third and fourth quarters, the Warhorses outscored the Billies 20-18 and 20-14, but it was not enough to come from behind. It was a tough match up for the Warhorses but they continued to play hard the entire game. Scores by quarter: Q1 10-11, Q2 17-33, Q3 38-51, Q4 58-65.
Leonard Pompa had an impressive night from outside the three point line, he sank four three pointers and totaled 14 points. Cash Walker had 17 points, Justin Contreras 9, Dalton Kramer and Kam Adams 7 each, and Brady Cardenas 4.
The Warhorses will compete in their first district game this Friday night in Crystal City and then at home Tuesday, January 15th against Pearsall. The Arabians will play in the same locations with games starting at 5:00 pm.
By Dicy Chambers
Sports Writer