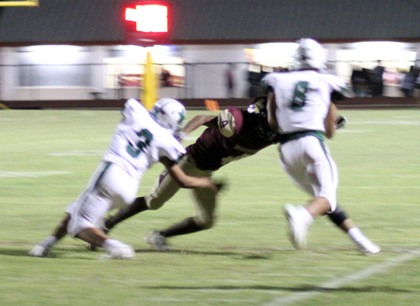 Lessons learned
Devine football is so important to so many people that the bigger picture of what football actually teaches young men is often lost directly after the Warhorses lose a ballgame.
Coach Gomez has preached “family” from day one of him becoming head coach and carries that motto on each year. Winning is great, there’s nothing better…except for life’s lessons learned after a disheartening setback that makes an individual stronger for his future.
“We always compare adversity in football to real life situations,” Gomez said about how he addresses these types of situations to his players. “These kinds of setbacks really teach you life lessons. We tell the boys later in life, you are going to have adversity. Bad things happen to good people. You are going to get knocked down but because of your family, you have to get back up and try to make a better life for your loved ones. You are going to have adversity. You are going to struggle in life. But you have to fight through it and have faith in yourself and your family. Together we can overcome.”
Seeing is believing
For those that thought “Ah, Carrizo hadn’t really played anyone yet, they can’t be that good”, well, yes, they are unfortunately. The Wildcats had only beaten Devine once over the past 25 years so it was easy to see why many would believe that this too would be a cake-walk for the Horses.
Instead, Carrizo Springs showed they are a real threat to take the District 15-4A DII championship. The Wildcats had four shutouts in five games going into their Devine matchup, and have a great shot to get a couple more over the next three weeks with contests against Bandera, Pearsall, and Crystal City.
The Warhorses were not shutout by any means, but their dominant running game was stymied as they rushed for a season-low 198 yards.
Hondo implications
Devine is not out of the running for a share of the District 15-4A DII championship by any means. For things to work in the Warhorses favor, number one they have to do themselves a favor by beating the Owls in Hondo this Friday night.
If Devine wins Friday night, then the next thing that has to happen is Hondo will have to beat the Wildcats in Carrizo Springs on the district’s final night of play which is November 5.
All three teams need to finish district at 4-1, with those particular games playing out as mentioned. Otherwise, runner-up or third place awaits the winner of this Friday’s ballgame between Devine and Hondo.
…and…
One game does not a championship season make as several other factors are also involved in district championship aspirations for a team that has a loss under its belt.
Point totals, other unexpected teams can suddenly be good for a night, injuries, and (I hate to mention it but) COVID might still play a role down the road.
Without seeing Bandera yet this season, it is hard to tell if they might play spoiler for Devine, Hondo, or Carrizo Springs as well. The Wildcats and Bulldogs go at it in Arky Blue’s Silver Dollar country this Friday.
Big blue
“It’s Hondo week and our concentration is strictly on Hondo. We can’t do anything about the past. We have to move forward and stay together as a team and keep believing in each other. We coaches haven’t lost faith in this bunch, and there’s still a gold ball to be won. It’s just a tougher road but one that we are prepared to take,” Gomez said in closing.
Team stats
Total yards Dev 261, Czs 379 First downs Dev 12, Czs 13 Rushing Dev 45-198-4.4, Czs 28-137-4.89 Passing Dev 2-7-63-0TD-1INT, Czs 13-22-242-2TD-1INT Fumbles-lost Dev 2-2, Czs 1-1 Penalties Dev 4-25, Czs 4-45.
Warhorse stats
Passing Brady Hackebeil 2-7-63-0TD-2INT Receiving Hayden DuBose 1-34, Nate Ramirez 1-29 Rushing Gabriel Esquibel 15-78-5.2, Ethan Santos 9-42-4.7-3TD, DuBose 8-39, 4.9, Marcus Rodriguez 5-26-5.2, Xavier Contreras 7-23-3.3-1TD, Hackebeil 1- -10.
Scoring summary
DEV–Ethan Santos 3-yard run (conv. run failed), 6-0, 7:37, 1st.
CZS–Avery Ramirez 38-yard pass from Evan Castellanos (Dominick Hernadez PAT), 6-7, 3:55, 1st.
DEV–Xavier Contreras 8-yard run (conv. run failed), 12-7, 11:53, 2nd.
CZS–Ramirez 81-yard pass from Castellanos (Hernandez PAT), 14-12, 9:01, 2nd.
CZS–David Castro 1-yard run (PAT failed), 20-12, 1:08, 3rd.
DEV–Santos 88-yard kickoff return (Contreras two-point conv. run), 20-20, 0:52, 3rd.
DEV–Santos 8-yard run (conv. run failed), 26-20, 7:06, 4th.
CZS–Austin Reyes 52-yard run (PAT failed), 26-26, 6:10, 4th.
CZS–Castellanos 2-yard run (Hernandez PAT), 26-33, 0:39, 4th.
By Jerel Beaty
Staff Writer