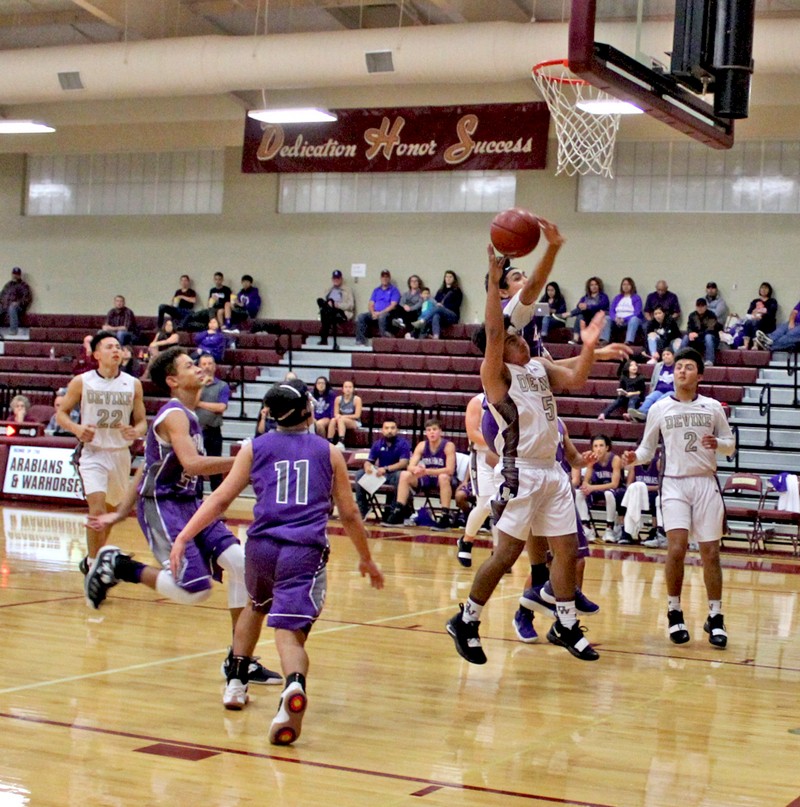 In the annual Devine Shoot Out, the Varsity Warhorses faced four tough opponents and came out stronger after beating Jourdanton, Warton, Mathis but losing to SA Cole. The Warhorses played tough, aggressive basketball all three days of the tournament.
Leonard Pompa and Cash Walker were named to the All-Tournament team!
The Jourdanton Indians were the first to face the Warhorses Thursday morning and it was a quick defeat for the Warhorses. This was an “excellent win verse a good Jourdanton team,” said Coach Paul Wells. Scoring 19 points with 5 three pointers was Pompa. Dalton Kramer had 2 three pointers in his 8 points. Mason Burford had 4 points, Kam Adams 2, Justin Contreras 6, Damien Martinez 4, Brady Cardenas 6, and Walker 13 points. Scores by quarter: Q1 23-7, Q2 42-17, Q3 54-26, Q4 62-37.
Beating a team that was ranked #20 was huge for the Warhorses after they defeated Wharton 60-53. Trailing 10-19 at the end of the first, the Warhorses were struggling to keep up but they started their comeback in the second quarter out scoring the Tigers 12-8 and finished the half 22-17. Coming out determined in the third, the Warhorses finally gained the lead at the end of the quarter 42-40 and still led at the end of the game 60-53. This impressive victory was a great way to finish the first day of the tournament. Contreras had 24 points, Walker 16, Cardenas 9, Pompa 5, Kramer 4, and D. Martinez 2.
In the second day of the tournament, the Warhorses only faced the Mathis Pirates and won 69-37. The Warhorses came out strong, took the lead early and held it the rest of the game. Scores by quarter: Q1 19-9, Q2 29-21, Q3 55-28, Q4 69-37. Walker led with 21 points, Kramer 17, Cardenas and Contreras 6 each, Adams 5, Sergio Martinez, Burford, and Pompa 4 each, and D. Martinez 2.
In their final game on Saturday, the Warhorses faced SA Cole. Having lost to Cole in November, the Warhorses played more aggressively this game and it was a close match up until the very end. “Kids played extremely well against a really good Cole team. The game was closer than the final score indicates. I’m very proud of the guys for their efforts and progress to the season,” said Coach Wells.
Scores by quarter: Q1 11-12, Q2 22-27, Q3 35-42, Q4 51-62. Pompa scored 17 points, Walker 15, Contreras 6, Cardenas 5, and Kramer and Adams 4 each.
It was a great tournament for all the teams that were involved and the Warhorses learned and improved with each game. Overall, they shot 64% of their free throws and no player was reported to have fouled out. The Warhorses are now 7-5 for the season.
By Dicy Chambers
Sports Writer