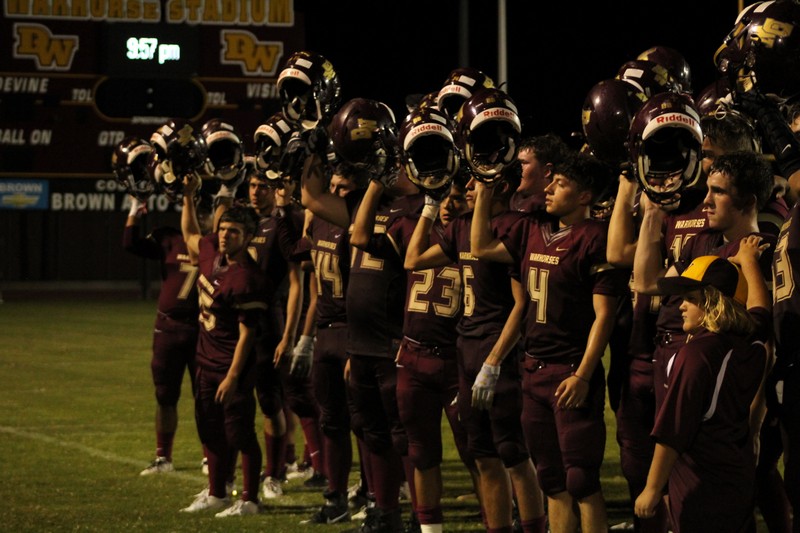 Warhorse Nation, you are needed for a five-week district championship run.
The race to the District 14-4A D2 championship begins October 12 in of all places, Hondo. One of the best things about living in a small town is having the entire community fully support its high school football team. Will you be not only be in Hondo on Friday, but will you also commit to supporting the Warhorses for the remainder of the 2018 season?
Texas is known for “Friday Night Lights”. Devine is known for Warhorse Nation.
Five games in five weeks with no need to travel more than 29 miles for any of them. Hondo at 21.4 miles, Pearsall at 21.8, Poteet at 28.4, and two games played in our own backyard at Warhorse Stadium makes every game manageable for all to attend and to show their complete support.
Devine’s future will be on display throughout all games, and I am not just talking about the players. Mr. Miller’s outstanding, award-winning band members and its flag corps not only put on great, entertaining halftime performances, they play their instruments to perfection and do chants throughout the game rooting on the Warhorse team.
Mrs. Debi Petty’s cheerleaders and Willie Warhorse lead cheers and coordinate routines with the band to boost the noise level throughout the maroon-dominated side of the stands.
The Maroon Mob student section has a great time yelling, cheering, and making all types of noises for their fellow classmates who are fighting their hearts out on the field.
All that is left is for the common fan to show up, be loud, and be supportive…in a positive way. Every member of every team wants to win. Every member of every team loves support and encouragement from its community. Our Warhorses are no different.
If you are a person that never misses a game,never misses anopportunity to cheer on the Warhorse football team, kudos to you! If you are someone who occasionally attends, the 15-18 year olds on the field need youfaithfully in attendance from here on out at every game.
If you are someone who has not gone to a game this season for whatever reason, please take the time to see what you are missing, or rather who you are missing.
This Warhorse team, much like every Warhorse team that has come before them, will fight to the end of every game. Sometimes, they will come out victorious as they did against the Southwest Legacy Titans in a thrilling, hard fought 30-27 victory. Sometimes, they will come up just inches short as they did in the heartbreaking 14-13 loss to the Central Catholic Buttons.
No matter what the case may be, don’t miss the opportunity to be a part of something special brewing here in Devine. Don’t miss the opportunity to show your support as the team marches toward its fourth district championship in the past five seasons.
Don’t be the reason that Hondo fans outnumber Devine fans, even though the game is in Hondo.
Don’t be the reason that crazed Crystal City fans outnumber Devine fans, even though that game will be played at Warhorse Stadium.
Don’t be the reason.
Be the example.
Warhorse Nation. Show up/Maroon out!
Players and coaches request
It is very important to have the stands packed as we go after the District Championship. There is no better feeling to our players when they know that the Warhorse Nation is there to support them fully!!—Defensive Coordinator George Villa
We would like to see the stands fill up at the district ballgames. To hear the fans and student section cheer brings the team and players up. The players want to thank you for your support!—Defensive back/quarterback Colin Dishman
The team would love for all to come out to the remaining games because we have a really good shot at winning the district championship. Those that come out will enjoy the great atmosphere, great competition, and they will feel the family unity. We need all of your support!—Tight end/defensive end Zackariuh Bocanegra
Come out and support us while we attempt to smack every team in our district. We have been working really hard and we would appreciate it if all Warhorse fans would come to all remaining games to cheer us on.—Tailback/linebacker Sergio Martinez
Because we have a good chance of winning district this year, it would help us play a lot better against the other district teams if everyone comes out and supports us. We will all do our part and play Warhorse football how it is supposed to be played. As long as we do that, we will be district champs.—Tailback Mason Burford
We all know that the stands will be full for the Hondo game. When is the Hondo game? That question always seems to be the first question that comes up after someone ask how is the team going to be this year. Even though the Hondo game is always fun and exciting, these players work just as hard to put a good product on the field each week no matter the opponent. It is really fun when the press box starts shaking after a good stampede in the stands. The kids really feed off the roar of the crowd. Please come out and pack the stands whether the game is home or away, the boys deserve it.—Special Team Coordinator Scott Taylor
By Jerel Beaty
Staff Writer