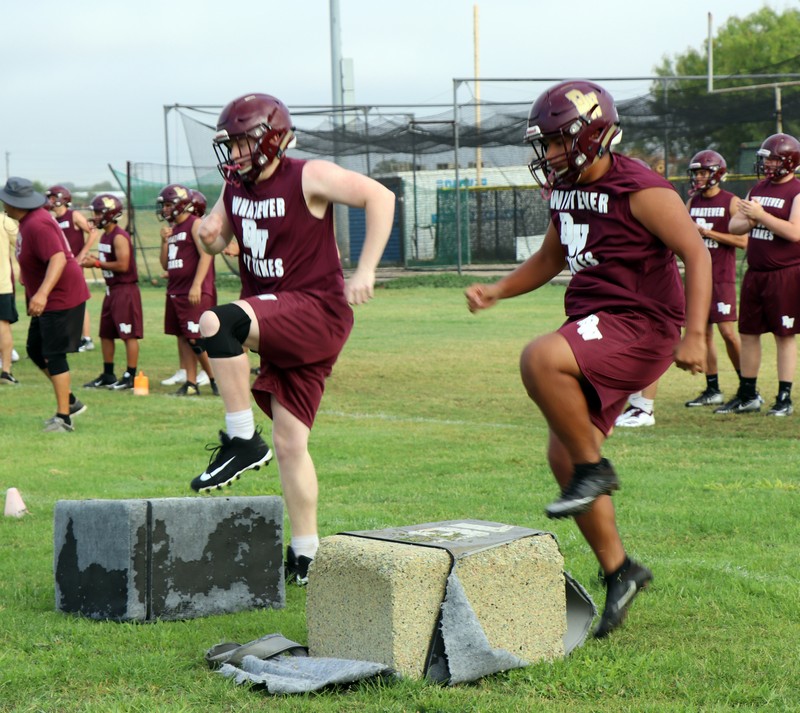 The Devine Warhorses have replaced their annual inter-squad scrimmage with a live scrimmage versus the Bandera Bulldogs this Friday at Warhorse Stadium. The freshmen will take the field at 5:00 pm, followed by the JV at 6:00 pm, and the varsity at approximately 7:00 pm. While there is no charge to watch a scrimmage, shower towels are requested as a donation to be divided between all sports, both Warhorses and Arabians.
While the inter-squad scrimmage served its purposes well in the past, that time has passed. “To be honest with you we really weren’t getting anything out of the inter-squad scrimmage the last couple of years,” Head Coach Paul Gomez commented. “Going against another team’s best players in each level from freshman to Varsity was, I believe, the best thing for us at this time. Plus, it gets the players excited about competing!”
In addition to the players having an increased level of excitement, and nerves, about going against unfamiliar players and schemes. Even though the football season will only be two weeks old by the time the scrimmage starts, the players and coaches undoubtedly look forward to facing the Bulldogs.
“We just need to get out there and play,” continued Gomez. “We want to go out there and execute and be aggressive on offense. Being able to go against another team will show us what we need to work on for the beginning of the season. It gives us a chance to evaluate our players and get them on film, which is the best teaching tool you can find. Players cannot hide from the camera; we can definitely see the things we are doing wrong and the things we are doing well.”
Bandera represents the extremely competitive District 13-4A DII. Once the district season kicks off, the Bulldogs will have to face the likes of tradition-rich and state ranked teams such as the Cuero Gobblers, Navarro Panthers, and Wimberley Texans. Good luck there.
Austin Eastside Memorial Panthers and the Llano Yellow Jackets will fight it out with the Bulldogs for that all-important fourth place finish. Whichever team claims that spot earns a place in the state playoffs and a bi-district match-up against the first place team from, you guessed it, District 14-4A DII.
Bulldog Head Coach Jeff Hamilton believes the match-up will be a good one based on the similarity of numbers in each school and on each team. “Early season goals for us include building team chemistry and to get better on a weekly basis,” Hamilton stated. “Our players have been upbeat and have been working hard. They are grinding it out on a daily basis. They want to improve and get more wins.”
Hamilton is confident his squad can get more victories in their early-season non-district games. Bandera opens with consecutive road games against San Antonio Memorial and San Antonio Christian before playing in their own stadium in week three versus St. Anthony. A short trip to Comfort followed by a home game against Crystal City wraps up their non-district matchups.
According to Dave Campbell’s Texas Football, Bandera returns 23 players from last year’s 2-8 (0-4 district) squad. Seven offensive starters are back while eight return on the defensive side of the ball. The players to watch are TE/LB Isaac Shelton, FB Nathan Blakeney, DL Angel Agular, RB/DB Tommy Cardenas, QB/RB/DB Gunnar Brown, OL/DL Zakary Widenor, WR/TE/DL Mason Phair, WR?LB Noah Adams, and QB Solomon MacNeil.
Offensively, Brown tallied 75 yards and 2 touchdowns while racking up 34 tackles and one interception on defense a year ago. Cardenas’s season ended early due to injury but had 208 yards rushing, 2 touchdowns, 24 tackles, and an interception before being lost for the remainder of the year. Shelton and Aguilar look to lead the defense.
Scrimmage information
The format for the varsity will be three rounds of the starting group going 10 offensive plays followed by 10 defensive plays. After every series, the offensive team will kick extra points to get in special teamwork. The backups will go two rounds of 10 defensive and 10 offensive plays followed by 1 round of five defensive plays and five offensive plays. Freshman and JV will go two rounds of 10 defensive and 10 offensive plays, then alternate five defensive and five offensive until the hour time limit has expired.
Towels needed
Shower towels are needed for all athletes in every sport. UIL prohibits charging for admission for scrimmages, but towels are a great way for the community to help out the student/athletes in Devine. Take one, take two, or take as many as you can. Each one is desperately needed and will be put to great use. All players, especially the football players who shower after practices and after games, greatly appreciate all donations.
By Jerel Beaty
Staff Writer